Women with the most deadly type of breast cancer have hope from a simple test which shows if they will respond to treatment.

‘Triple-negative’ breast cancer, most common in women under the age of 40 and affecting more than 8,000 women every year in the UK, is so aggressive it can survive chemotherapy.

About a third of women see the standard chemotherapy fail and the cancer come back within three years.

However, scientists have discovered a test which identifies these women, so that they can be given a different type of chemotherapy likely to work better.

The test is for a protein called NUP98, which is thought to switch on genes that help cancer cells survive chemotherapy.

It can be found using a simple biopsy of breast tissue, with results available to doctors within 24 hours. 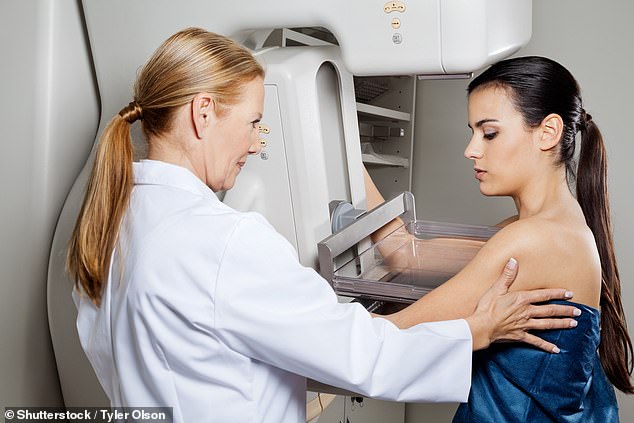 Women with high levels of the protein are 10 times more likely to see their cancer come back, raising their risk of dying, and are half as likely to benefit from the standard chemotherapy, researchers who looked at results for more than 500 women found.

They say the test could be available for women within a decade, following trials on the first breast cancer patients in five years.

Dr Niamh Buckley, who led the study of breast cancer patients from Queen’s University Belfast, said: ‘We know that triple-negative breast cancer is a very aggressive form of the disease.

‘For women who have been diagnosed, we want to tailor their treatment to give them the best possible chance of survival.

‘This test will hopefully help us to identify women who should be given an alternative form of chemotherapy and could stop breast cancer coming back in these women, saving their lives.’

Around one in seven breast cancers are triple-negative, meaning they are negative for ‘receptors’ on cancer cells which receive signals to divide.

Other types of breast cancer, like ‘oestrogen receptor-positive’ breast cancer, can be treated with wonder drugs like tamoxifen which damage the machinery allowing the cells to multiply.

But women with triple-negative breast cancer have no such drugs, meaning surgery and chemotherapy are their only chance of survival. That is why it is so important that the standard chemotherapy, using drugs called anthracyclines, works.

The newly discovered test, reported in the journal BMC Cancer, could help to identify the one in three women for whom this type of chemotherapy will not work.

It picks up those women with high levels of NUP98, which blocks the chemotherapy meant to kill off cancer cells by destroying their DNA.

It is not fully understood how the protein works, but it may switch on genes which repair the DNA damage or help cancer cells survive it by blocking the signal which kills them when they are damaged.

If these women can be singled out, they can be given a treatment more likely to work so that their cancer will not come back or spread to their liver or brain and become terminal.

They can instead have a different type of chemotherapy, such as one type using drugs called ‘taxanes’ to stop cancer cells dividing.

The test, found using breast tissue from more than 100 women with triple-negative breast cancer and confirmed using a database of another 450 patients, uses a substance which reacts with NUP98.

The protein is tagged with a brown dye in women’s breast tissue sample, so that it can be easily spotted in the laboratory.

Women with high, rather than low levels of NUP98 are seven to 10 times more likely to see their breast cancer come back after chemotherapy.

Baroness Delyth Morgan, chief executive of Breast Cancer Now, which funded the study, said: ‘This is a very promising discovery. It’s really encouraging that testing for levels of NUP98 could help ensure patients get the type of chemotherapy that’s most likely to be effective for them as early as possible.’

WHAT IS BREAST CANCER, HOW MANY PEOPLE DOES IT STRIKE AND WHAT ARE THE SYMPTOMS?

What is breast cancer?

Breast cancer develops from a cancerous cell which develops in the lining of a duct or lobule in one of the breasts.

When the breast cancer has spread into surrounding breast tissue it is called an ‘invasive’ breast cancer. Some people are diagnosed with ‘carcinoma in situ’, where no cancer cells have grown beyond the duct or lobule.

Most cases develop in women over the age of 50 but younger women are sometimes affected. Breast cancer can develop in men though this is rare.

The cancerous cells are graded from stage one, which means a slow growth, up to stage four, which is the most aggressive.

A cancerous tumour starts from one abnormal cell. The exact reason why a cell becomes cancerous is unclear. It is thought that something damages or alters certain genes in the cell. This makes the cell abnormal and multiply ‘out of control’.

Although breast cancer can develop for no apparent reason, there are some risk factors that can increase the chance of developing breast cancer, such as genetics.

What are the symptoms of breast cancer?

The usual first symptom is a painless lump in the breast, although most breast lumps are not cancerous and are fluid filled cysts, which are benign.

The first place that breast cancer usually spreads to is the lymph nodes in the armpit. If this occurs you will develop a swelling or lump in an armpit.

How is breast cancer diagnosed?

If you are confirmed to have breast cancer, further tests may be needed to assess if it has spread. For example, blood tests, an ultrasound scan of the liver or a chest x-ray.

How is breast cancer treated?

Treatment options which may be considered include surgery, chemotherapy, radiotherapy and hormone treatment. Often a combination of two or more of these treatments are used.

How successful is treatment?

The outlook is best in those who are diagnosed when the cancer is still small, and has not spread. Surgical removal of a tumour in an early stage may then give a good chance of cure.

The routine mammography offered to women between the ages of 50 and 70 mean more breast cancers are being diagnosed and treated at an early stage.