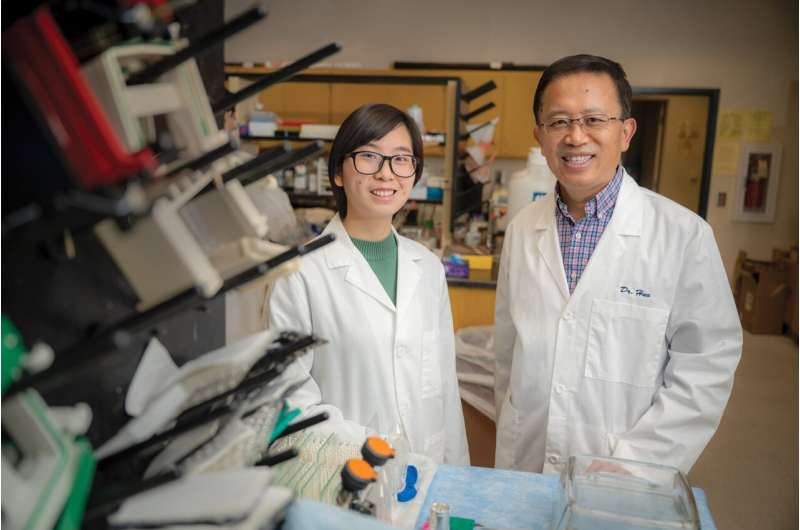 Soon after cholesterol and fat start depositing on the lining of the blood vessels that supply your heart, the smooth muscle cells that give the blood vessels strength and flexibility start to get bigger and multiply.

While scientists studying the phenomenon suspect these vascular smooth muscle cells are trying to help, this atypical behavior for these strong cells instead contributes to coronary artery disease, the most common type of heart disease in the United States.

In a bit of a vicious cycle, stents as well as bypass grafts used to treat coronary artery disease can prompt the same response.

Now Medical College of Georgia scientists report new insight into how the cells enable this unhealthy growth and a new target to intervene.

The endothelial cells that line our blood vessels are in constant communication with the layers of vascular smooth muscle cells that encase them and play a key role in regulating our blood pressure, says Yuqing Huo, MD, Ph.D. and director of the Vascular Inflammation Program in the Vascular Biology Center at MCG.

In states of good health, for example, the two cell types share messages about how it’s time for our blood vessels to dilate a little because we are exercising. Early in vascular disease, however the conversations change, says Huo, corresponding author of the study in the American Heart Association journal Circulation.

“They get the message that something is wrong,” says Huo, and existing cells get exponentially bigger and start proliferating, which these cells don’t normally do, perhaps in an effort to make more room inside for blood to flow since cholesterol and fat are narrowing the existing passageway.

“Normally the smooth muscle cells provide strength… if they start to proliferate a lot, it changes their identity,” Huo says.

Whatever the reason, the result is more narrowing and scarring of the vital passageway for blood and worsening disease. So, the scientists looked at the building blocks needed to enable the unhealthy response.

They knew that growing more and bigger cells requires more DNA, RNA and the proteins they produce. To make that happen requires more purines, one of two chemical compounds in the body used to make the building blocks of DNA, in this case adenine and guanine.

What they didn’t know was precisely how these cells make more purine when faced with arterial disease, says Dr. Qian Ma, postdoctoral fellow with Huo and the study’s first author.

There are two fundamental ways cells come up with purine: One is to essentially make it from scratch, called de novo purine synthesis, and the other is recycling.

The MCG scientists are the first to find that the higher-energy consuming de novo purine synthesis is increased in this scenario, Ma says. In the scar tissue and plaque inside blood vessels of mice and humans, Huo, Ma and their colleagues also found increased expression of ATIC, a gene essential to purine production.

The net effect of less ATIC was reduced formation of scar tissue in animal models of both atherosclerosis and restenosis, or re-narrowing of blood vessels, including buildup inside the stents themselves, that can occur after procedures like angioplasty to open clogged vessels and placement of stents to help keep them open.

“It takes away one of the building blocks of DNA,” says Ma. “The blood vessels remained normal. The lumen stayed open.”

The response shows that the production of purine plays a key role in the proliferation of smooth muscle cells and pegs ATIC as a logical point to intervene, the scientists say.

“Our model demonstrates that this ATIC is important and targetable,” says Ma.

While there is still much work to do, Huo suspects an ATIC inhibitor would work best early in the disease process when an abnormal stress test indicates that cholesterol and fat in the blood are starting to deposit inside blood vessels and that applying an inhibitor to stents placed inside diseased blood vessels would be one good way to administer it.

The scientists hope their findings will inspire drug developers to create a specific inhibitor for this hallmark contributor to heart disease, which is the leading cause of death of males and females in the United States, according to the Centers for Disease Control and Prevention.

“Our role is just to provide a target and other people will generate a drug,” Ma says of a potential therapy that likely would be used in conjunction with other approaches like statins, which lower cholesterol.

Huo’s lab also plans to examine when vascular disease is not present, whether smooth muscle cells instead opt to use purine recycling to meet the much lower demand for protein rather than the multistep production process, which includes ATIC.

The scientists note that making purine from scratch is often the method used by rapidly dividing cancer cells, and that ATIC expression also is high in some of these cells, which seems to make ATIC a logical treatment target for cancer as well. In fact, one way the old chemotherapy drug methotrexate is thought to work is by inhibiting ATIC, although the drug has multiple targets, and potentially serious side effects including sudden vision loss and seizures.

“Both tumors and smooth muscle cells under stress need to proliferate a lot and if we block this pathway, it will reduce their proliferation,” Ma says.

New, more specific ATIC inhibitors are in varying stages of study against cancer, but the scientists note that when they tried a couple of these newer inhibitors, including at high doses, they apparently are not potent and/or specific enough to make the kind of positive changes in vascular smooth muscle cells that they got with their genetic manipulations.

Inhibitors likely could not be used long term in either scenario since they might interfere with the works of cells that need to proliferate, like skin cells and cells that line the gastrointestinal tract, Huo adds. But treatment at strategic points and for limited times should not hurt even normally proliferating cells.

The scientific team also is studying pathways for purine production in pulmonary hypertension, which is destructive high blood pressure in the lungs and right side of the heart.

Studies have indicated that high levels of ATIC correlates with poor survival in liver cancer and knocking expression of ATIC down reduces cancer cell proliferation and migration.

Coronary stents have been in use in this country since 1994 and drug-eluting stents, coated with drugs that reduce clot formation, first came into use five years later. Stents are a primary intervention for patients with a couple of diseased coronary arteries and can become obstructed through some of the same processes that prompted the need for stents, as well as the trauma caused to the lining of the blood vessel from their placement.