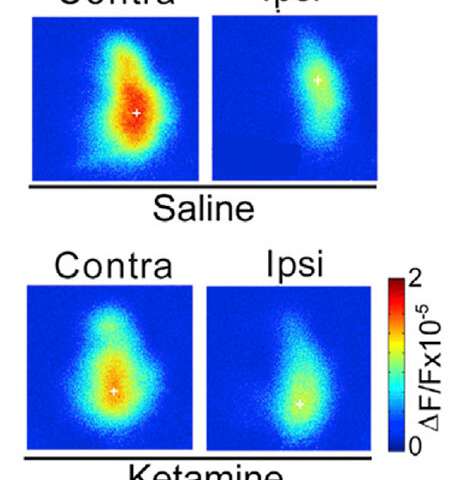 In a new study, published in Current Biology, researchers from the University of California, Irvine School of Medicine reveal how subanesthetic ketamine, which is used for pain management and as an antidepressant in humans, is effective in treating adult amblyopia, a brain disorder commonly known as ‘lazy eye.’

“Our study demonstrates how a single-dose of subanesthetic ketamine reactivates adult visual cortical plasticity and promotes functional recovery of visual acuity defects resulting from amblyopia,” explained Xiangmin Xu, Ph.D., a professor of anatomy and neurobiology and director of the Center for Neural Circuit Mapping at the UCI School of Medicine.

Subanesthetic ketamine, commonly used to treat depression and pain, evokes rapid and long-lasting antidepressant effects in human patients. There was evidence that ketamine may control how the nervous system makes structural changes in response to internal and external demands, a process called neural plasticity. But, how the drug worked remained elusive, until now.

“Through this neural plasticity-based mechanism, ketamine mediated functional recovery from adult amblyopia.” Xin Qiao, Ph.D., a postdoctoral staff in the Xu lab is a co-first author for the published paper.

Amblyopia is a vision disorder in which the brain fails to process inputs from one eye, favoring the other eye. The condition can result in decreased vision in the affected eye. Each year, between one and five percent of children worldwide, are diagnosed with this condition.