New, non-invasive heart operation can fix a faulty valve… and get you back on your feet in days

Around 1.5 million Britons have a faulty mitral heart valve. To repair or replace it has usually involved open-heart surgery. But Ron Thomson, 81, a grandfather of five and a retired car manufacturing manager from Sayers Common, West Sussex, was the first UK patient to benefit from a new non-invasive procedure, as he tells Adrian Monti.

My heart attack three years ago was a strange experience: I was pruning a tree when I felt a slight chest pain.

I thought it was indigestion but when I saw my GP she ordered an ambulance to take me to hospital, where they said I needed emergency surgery as three of my coronary arteries were blocked. That same day I had a triple heart bypass.

It took three months before I felt back to my old self.

Since then I’ve had heart scans every six months. Then in March 2019, an echocardiogram [ultrasound of the heart] revealed I had a leaky valve, probably due to damage from my heart attack, and as a result my heart wasn’t pumping efficiently. 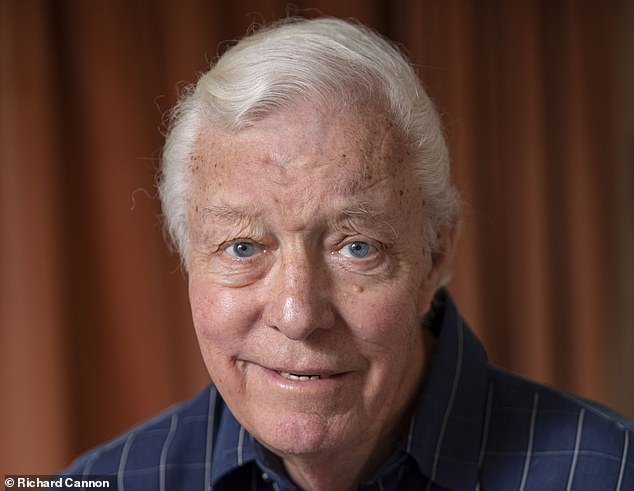 My heart attack three years ago was a strange experience: I was pruning a tree when I felt a slight chest pain

The doctors said that, at some stage, I’d need surgery to repair it because it can cause heart failure which would also make me feel tired and become breathless easily. This was a big surprise as I didn’t have any symptoms.

However, at the time the only option was open-heart surgery and because of my age (I was then almost 80), and since it wasn’t causing me problems, it was decided it just needed monitoring.

As with any heart procedure, there is the risk of bleeding and infection.

With the current understanding of this new procedure, there is a 5 per cent risk of major complications such as a stroke.

‘We have used this type of procedure for the past 15 years to replace the aortic valve [which sits between the left lower chamber and the aorta, the main artery in the body], but now we are using it for the mitral valve which is much harder to access,’ says Dr Michael Mullen, a consultant cardiologist at the Barts Heart Centre in London.

‘Because it currently comes in one size, only about 20 per cent of patients screened are suitable for it — the anatomy of the heart needs to be a certain size and shape.

‘But once we learn more about this technology, I’m sure it will become available to more people who will no longer need open-heart surgery.’

But gradually I started to feel the symptoms. I could still walk our greyhound Lucky, but gardening and some household tasks would make me breathless quickly.

Then in February this year, I was contacted by the Royal Sussex County Hospital in Brighton to see if I’d like to be considered for a trial for a new procedure to replace my leaking valve without open surgery.

I met the cardiologist Professor David Hildick-Smith in June, who explained they’d do the operation via blood vessels in my groin using an innovative device.

I underwent the two-hour procedure in July — I only found out afterwards I was the first in the UK, which I am quite proud of. I wasn’t in any discomfort when I came round and the next day I was encouraged to walk slowly up and down the corridor. I was surprised by how good I felt.

My wife Judith took me home the next day. Three days after the procedure I took Lucky out for a 45-minute walk, and a few days later I managed some light gardening and mowed the lawn — all without getting breathless.

I’ve got two small scars, one at the top of each leg, and take warfarin to prevent blood clots, but otherwise I’m back to my old self.

DAVID HILDICK-SMITH is a professor of intervention cardiology and a cardiac consultant at the Royal Sussex County Hospital in Brighton, East Sussex.

The mitral valve sits between the upper (the atrium) and lower (the ventricle) chambers of the left side of the heart — it opens and closes to allow blood from the left atrium to the left ventricle, which pumps blood around the body.

If the valve becomes damaged — as a result of infection or a heart attack, for example — it can no longer close fully and blood can leak backwards, which makes the heart inefficient at pumping blood around the body.

Most people who have a problem with their mitral valve won’t have symptoms but, left untreated, in some it can eventually lead to chest pain, breathlessness and fatigue. And because the heart has to work harder to maintain blood flow, this weakens the heart muscle, causing heart failure.

In most cases the valve will need to be repaired or replaced.

Until now, that has meant open-heart surgery because the mitral valve is quite difficult to reach by other means. Each year about 5,000 mitral valve operations are done in the UK.

But open-heart surgery is hugely invasive as we must open the patient’s chest and the heart must be stopped — a heart-lung machine is then used to circulate blood around the patient’s body.

As it’s a big operation, the risks can include death or stroke in around 10 per cent or more of patients. The patient usually stays in hospital for up to ten days afterwards before a three-month recovery at home. It can take a lot out of people.

Open-heart surgery is also not suitable for older people and those with other health issues, such as lung, kidney or vascular disease, as it puts such strain on the body.

Between 30 to 50 per cent of patients are not suitable for open-heart surgery, which means apart from medication to control symptoms, there is little we can do.

But the latest innovations mean we can now replace the faulty valve without open-heart surgery. For example, the HighLife mitral valve replacement system, which we used for Ron, is the result of the miniaturisation of equipment and technical ingenuity. 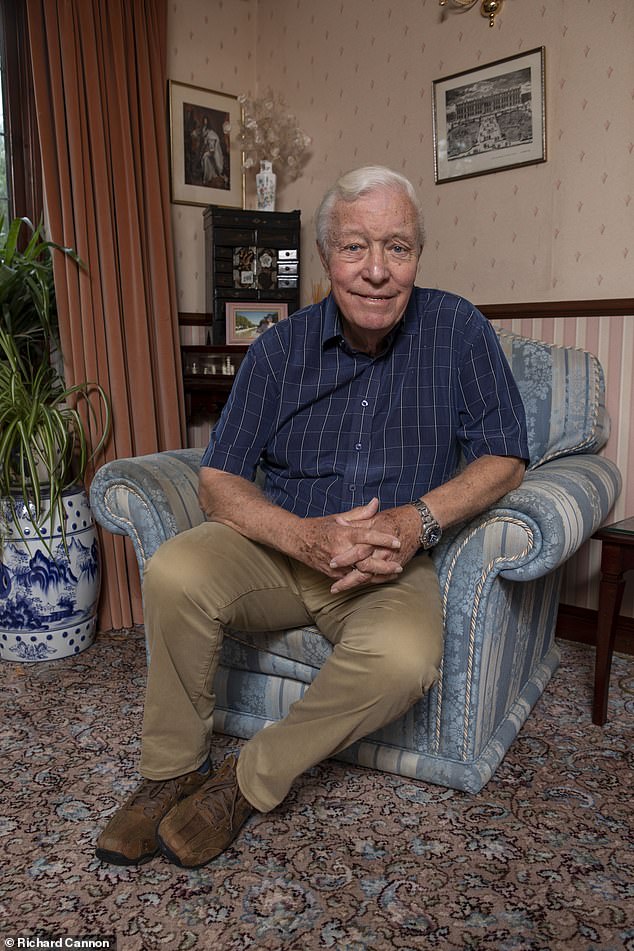 I underwent the two-hour procedure in July — I only found out afterwards I was the first in the UK, which I am quite proud of

The HighLife mitral valve replacement system overcomes a major difficulty with surgery for mitral valves, which is that there’s little to attach the new valve to. In traditional surgery we open the patient and sew the valve in.

But the Highlife uses what looks like a ‘rubber ring’ attachment to secure the replacement valve — this ring is secured under the malfunctioning valve, around its flaps, which forms a docking station for the new replacement to fit into — that is why it is so clever.

The procedure, which takes two hours under a general anaesthetic, is performed using X-rays and ultrasound images of the heart.

A small incision is made in the left groin area and a tube is fed up via an artery to the heart. Then a thin wire is put through — this wire lassos the underside of the mitral valve and is tightened.

It has taken years to successfully do this without strangling the valve or getting caught on the surrounding tissue. This is probably the most technically demanding part of the procedure.

The ring-shaped implant, made from a special plastic, is then inserted through the tube and secured over the loop of the guide wire, like a sleeve.

This makes a stable docking station around the valve.

Next we make a tiny incision in the right leg and a different tube is fed along to the heart.

A small needle is then inserted through this and pushed into the membrane between the two upper chambers of the heart, to where the mitral valve sits.

We then insert the replacement valve — a standard one, consisting of a mesh frame made from a metal alloy called nitinol and the tissue from a cow’s heart stretched over it — folded down to introduce it through the tube.

This valve is then placed inside the ring so that when it expands out into its shape it fits securely.

Patients are usually up and walking the next day — and home within two days.

The key advantages of this procedure are the quicker recovery, and the fact that more patients can benefit. There are 65 centres across Europe, Australia and the U.S. taking part in this clinical study with the Highlife valve, with about 30 procedures performed worldwide. Ron’s results so far have been encouraging.

Do I really need?

Claim: A lotion containing tea tree oil and vitamin A that helps ‘eliminate ingrown hairs and razor bumps’. Apply to clean, dry skin after hair removal. Use once daily for seven to ten days, or for severe cases twice daily until improvement is visible.

‘If the skin is pulled taut during a close shave or wax, when the skin is relaxed again, the short hair can slip into the hair follicle. Skin cells then grow over the follicle, blocking it and trapping the short hairs inside the skin, making the hair curl back on itself.

‘If bacteria enters, the lump can become red and painful. The tea tree oil here will help to reduce the redness and infection — research has shown that it has antibacterial and anti-inflammatory properties — while the vitamin A extract will remove the dead skin cells blocking the follicle so the hair can grow outwards freely again.’