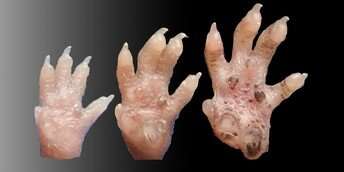 Moles stop growing when they reach a certain size due to normal interactions between cells, despite having cancer-associated gene mutations, says a new study published today in eLife.

The findings in mice could help scientists develop new ways to prevent skin cancer growth that take advantage of the normal mechanisms that control cell growth in the body.

Mutations that activate the protein made by the BRAF gene are believed to contribute to the development of skin cancer. However, recent studies have shown that these mutations do not often cause skin cancer, but instead result in the formation of completely harmless pigmented moles on the skin. In fact, 90% of moles have these cancer-linked mutations but never go on to form tumors. “Exploring why moles stop growing might lead us to a better understanding of what goes wrong in skin cancer,” says lead author Roland Ruiz-Vega, a postdoctoral researcher at the University of California, Irvine, US.

Scientists believe that stress caused by rapid cell growth may stop the growth of moles through a process called oncogene-induced senescence (OIS), but this has not been proven. To test the idea, Ruiz-Vega and colleagues studied mice with BRAF mutations that develop numerous moles.

The team first focused on assessing ‘senescence’, a set of changes in cells usually associated with aging. Using a technique called single-cell RNA sequencing to compare mole cells with normal skin cells, they found that moles are growth-arrested, but no more senescent than normal skin cells. The cells also did not have any apparent differences in gene expression (where a gene is activated to create a necessary protein) that would support the idea of OIS controlling their growth.

Additionally, computer modeling of mole growth did not support the idea of OIS. In fact, the models suggested that mole cells communicate with each other when moles reach a certain size and stop growing. The same kind of communication also takes place in many normal tissues to enable them to achieve and maintain a correct size.