Scientists in Colombia have identified a new highly divergent SARS-CoV-2 lineage with Spike substitutions L249S and E484K. These same mutations have convergently appeared in other mutant strains of the virus, most notably in variants of concern.

A pre-print version of the research paper is available to read in full on the medRxiv*server.

The rapid spread and RNA nature of severe acute respiratory syndrome coronavirus 2 (SARS-CoV-2) have allowed it to give rise to mutant strains. Although only a few current variants are of real concern above the base virus, so far, over 800 lineages have been described, many of them evolving the same mutations independently of each other.

Katherine Laiton-Donato and colleagues in Colombia have now sequenced a new highly divergent variant, with mutations including Spike substitutions L249S and E484K.

These two substitutions are thought to be associated with immune escape. The presence of E484K is especially believed to be responsible for resisting antibodies from convalescent blood plasma. These two mutations are associated with the B.1.1.28 and B.1.351 lineages (the Brazilian and South African variants, respectively), two variants of concern. 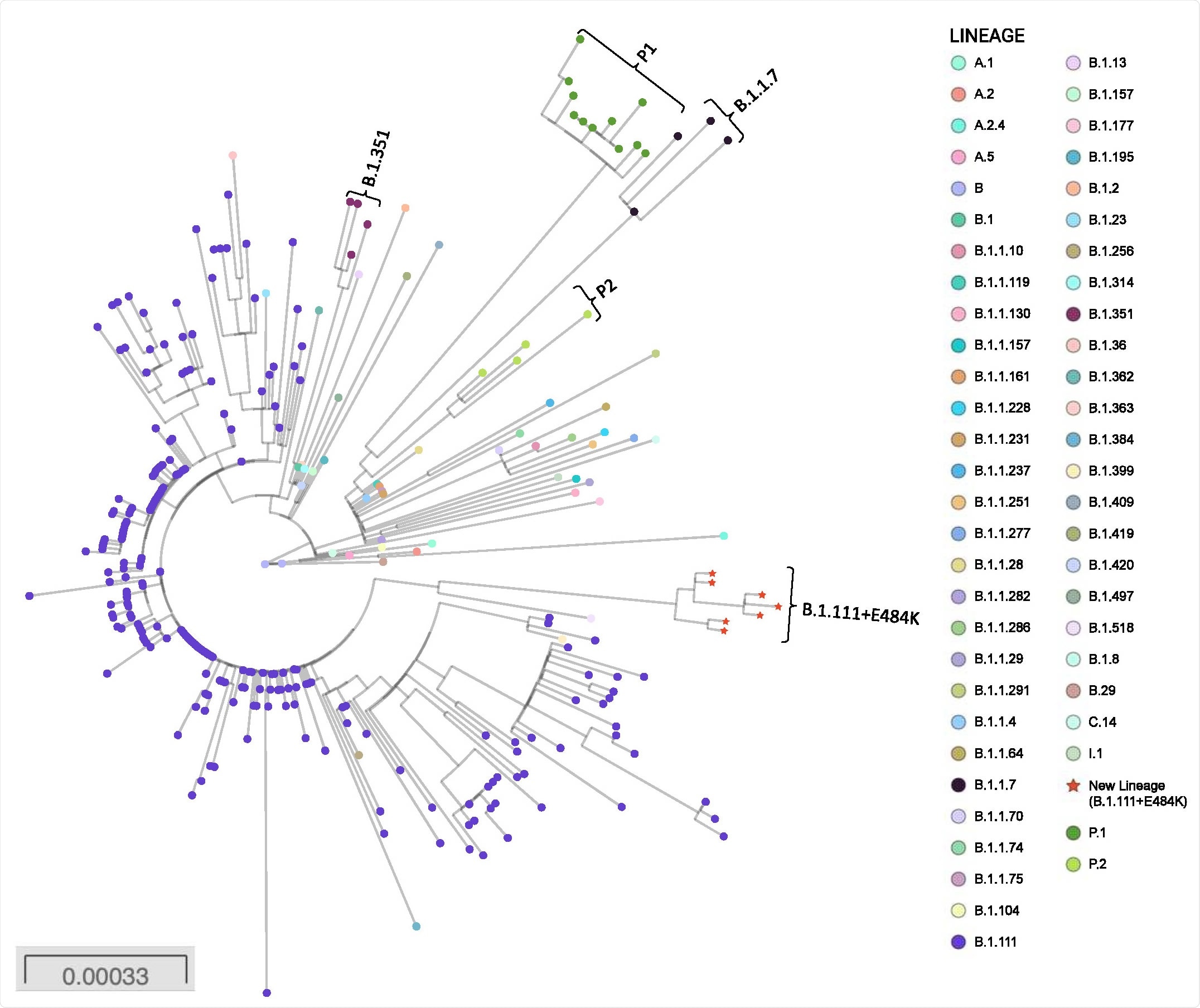 Phylogenetic tree of the new lineage of SARS-CoV-2 emerging from B.1.111 lineage. The tree was reconstructed by maximum likelihood with the estimated GTR+F+I nucleotide substitution model for the dataset of 304 full-length genomes, representative of the principal recently emerging lineages. The interactive tree can be accessed in the following link: https://microreact.org/project/nFBT2K1JdjcMuEPH7u32Ar/6d9eb0c0. Red stars represent the sequences belonging to the new lineage.

The team used the Pangolin algorithm – a database of recorded SARS-CoV-2 genomes – to determine an origin for the new Colombian sequence. The algorithm assigned the lineage as belonging to the B.1.111 lineage, first identified in the USA in early March 2020. This variant is currently circulating in Colombia, USA, Aruba, and Belgium. A Maximum Likelihood phylogenetic tree was also used to estimate the parental lineage. The results of this also supported B.1.111 parentage. Other mutations within the sequence are also consistent with this hypothesis.

Despite this consensus, there are still many distinct mutations present in the newly identified strain that are divergent from B.1.111. The authors posit that a larger sample size may well continue to support B.1.111 parentage. However, an alternative explanation is that these mutations may have convergently arisen from intense, presently unknown, ecological pressures.

The L249S and E484K substitutions have appeared convergently in nearly 70 identified strains, and this is not wholly unsurprising considering these are both thought to be associated with provided antibody resistance.

The rapid emergence of convergent antibody-resistant viral strains will challenge the current global vaccination program, as mutations such as L249S and E484K may be able to arise in any local population within any country sporadically.

The authors conclude, “In the context of pandemic spread of the virus, an enormous virus population size is expected, as it is also the emergence of virus variants that could also make possible the emergence of antibody-resistant mutants in the context of natural infection in immunocompetent people. It is necessary to evaluate the impact of this genetic background in the neutralization efficacy of convalescent sera/plasma from acquired immunity.”