It usually takes 10 to 15 years to develop a new drug, and they cost around US$2.6 billion each. Because it’s difficult to predict how a drug candidate will interact with human cells, many drugs never pass clinical trials. Testing new drugs on human cells is expensive and complicated, so it is difficult to do early in the development of a drug.

To help solve this problem, my research group has built designer artificial cells on a chip the size of a postage stamp. These artificial cells mimic how cells degrade during cancer. This makes it possible to test new drugs early in drug discovery (the process of drug development), and see whether they’re likely to work.

Our artificial cells are designed to give us early insight into how new cancer drugs behave in cells, and why certain kinds of cancer are more resistant to chemotherapy treatment.

My research group at the University of Victoria builds artificial cells and tissues for drug discovery using microfluidic chips. Elanna Stephenson, one of my graduate students, performed the cancer cell research that this story is based on. We work at the interface of engineering, biochemistry and pharmacology, and as a result, our research is very interdisciplinary.

Given this complexity, it is difficult to reverse-engineer a cell from the top down to examine each type of molecule and its effect. Instead, our research aims to build artificial cells from the bottom up, to determine in isolation how each kind of molecule that makes up the cell membrane affects the ability of drugs to enter the cell. 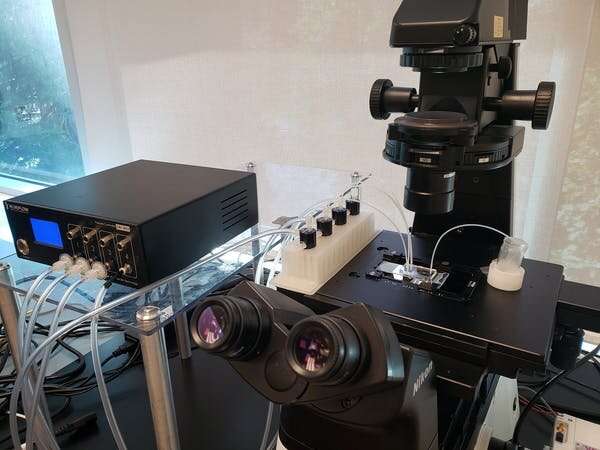 We manipulate fluids on much smaller scales than in traditional laboratories using microfluidic devices called chips. Manipulation of fluids at these small scales—generally measured in micrometers (one thousandth of a millimeter)—is referred to as microfluidics.

Our microfluidic chips are made of a transparent polymer in which we imprint pipes. These pipes are the size of a human hair (100 micrometers, or one tenth of a millimeter), and in many ways are like miniaturizing a chemical manufacturing plant.

In our microfluidic chip we create tiny droplets of water that are around the size of human cells, a process called droplet microfluidics. We design our chips so that we may manipulate and analyze each droplet independently. This is the engineering side of our research.

We cover the droplets with molecules that are similar to those found in the cell membrane of human cells to create artificial cells known as droplet interface bilayers (DIBs). Although these types of artificial cells have been around for over a decade, this is the first time they’ve been used to mimic the breakdown in the composition of cell membranes that occurs during cancer.

This allowed us to reveal new insights into the behavior of the chemotherapy drug doxorubicin when it is being absorbed by cells. This is the biochemistry side of our research.

Cell membranes are composed of two layers of molecules called phospholipids. Generally, these layers are not the same, which is called membrane asymmetry.

We found that the degree of asymmetry of the artificial cells affects how fast doxorubicin enters the artificial cell. This highlights another possible reason why drugs stop working effectively (chemoresistance) against some forms of cancer. This is the pharmacology side of our research.

Our research demonstrates the importance of closely replicating both the composition and the structural features of cell membranes when studying a new drug.

The current approach to research for drug development means that we don’t understand how drugs will behave in the human body until far too late in the drug discovery process. This is costly in terms of the money and time required for drug development, and ultimately may postpone potentially life-saving treatments for patients.