The coronavirus disease 2019 (COVID-19) pandemic brought about by the severe acute respiratory syndrome coronavirus 2 (SARS-CoV-2) has already led to four major waves of infection in Canada. Reports from October 22, 2021, suggest that 1.7 million confirmed infections and more than 28,500 deaths have been observed in Canada.

However, seroprevalence rates remain relatively low, making vaccination the only means of protecting the population against COVID-19. As reported on October 9, 2021, 76.6% of the population and 87.2% of those above 12 years of age had received at least the first dose of the vaccine.

Despite these high vaccination rates, questions regarding infection-induced and vaccination-induced humoral immunity remain. Furthermore, the generation of functional neutralizing antibodies, duration and decay of the immune response, and overall differences in humoral responses across groups of individuals with different comorbidities have also been a subject of interest. The answers to these questions are important, as they can guide and prioritize public health programs, such as schedules for vaccine boosters. 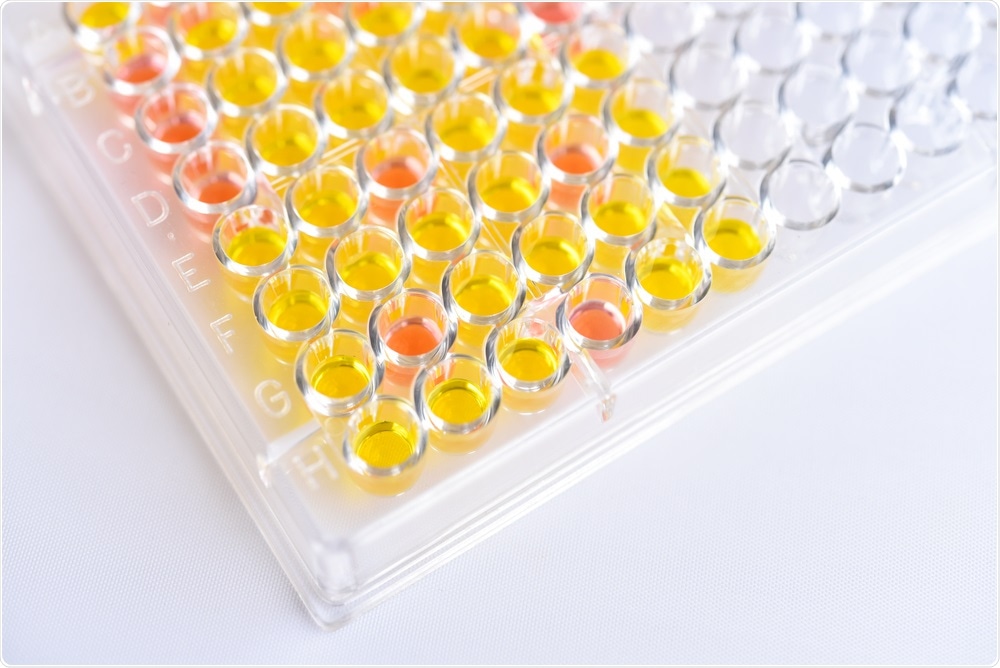 Antigens derived from the SARS-CoV-2 spike (S) and nucleocapsid (N) proteins are mostly used in serological assays, including those that are developed by commercial vendors. Protein segments, full proteins, as well as peptides have been used in such assays that lead to confusion in the interpretation of results.

Plate-based enzyme-linked immunosorbent assays (ELISAs) have been widely used for the assessment of antibody responses to pathogens by recognizing specific antigens of the pathogen. Previous studies have demonstrated that ELISA was used to show that immunoglobulin G (IgG) against the SARS-CoV-2 S, N, and receptor-binding domain (RBD) proteins can persist in the serum and saliva of individuals infected with SARS-CoV-2 for at least 3 to 4 months. Few other studies described the persistence of circulating IgG for up to 13 months.

Studies have also shown that the production of neutralizing antibodies capable of preventing interactions between the S or its RBD, as well as its target of the angiotensin-converting enzyme 2 (ACE2) receptor, could be monitored with the help of a plate-based surrogate neutralization (sn)ELISA. Furthermore, good correlations between this assay and both S-pseudotyped lentiviral and authentic SARS-CoV-2 plaque neutralization assays have suggested that this approach could be a better alternative to classical antibody neutralization assessment.

Although laboratory-based ELISA assays have been developed around the world, various groups use different sources of antigens and antibodies that impede the comparison of vaccine effectiveness and seroconversion. Additionally, there is a lack of agreed-upon reference standards, except pools of convalescent plasma that have been distributed by the World Health Organization (WHO). Assay performance variability over time has also been incompletely examined.

A new study published on the preprint server medRxiv* developed a “Made-in-Canada” solution for enabling scalable and reproducible SARS-CoV-2 serology testing using standardized protein reagents and protocols, along with independent automated platforms, in Toronto and Ottawa.

The first step of the study involved the in vitro production of the SARS-CoV-2 S, N, and RBD proteins, as well as a recombinant antibody, and biotinylated ACE2 at the National Research Council of Canada. The second step involved the recruitment of participants from both Toronto and Ottawa. Serum plasma samples, as well as dried blood spots (DBS), were collected from healthy individuals, those infected by SARS-CoV-2, and vaccinated individuals.

The results of this study can be expressed as relative ratios or can be converted into international units (BAU/mL) that promote comparisons between labs. The antibody detection and surrogate neutralization assays took place in 96-well format, as well as on two different 384-well automated chemiluminescent platforms. This helped the reagents to be used in small-scale laboratories with basic equipment and dedicated high throughput facilities.

The results indicated that single-point ELISA was capable of accurately distinguishing between infected and non-infected individuals. The current study also demonstrated that the snELISA can be performed automatically at single points that could increase the scalability of this assay.

The results suggested that the determination of sample positivity in seroprevalence required at least two out of the three antigens. This helps to eliminate false-positive results for individual antigens, as well as maintain similar sensitivity. 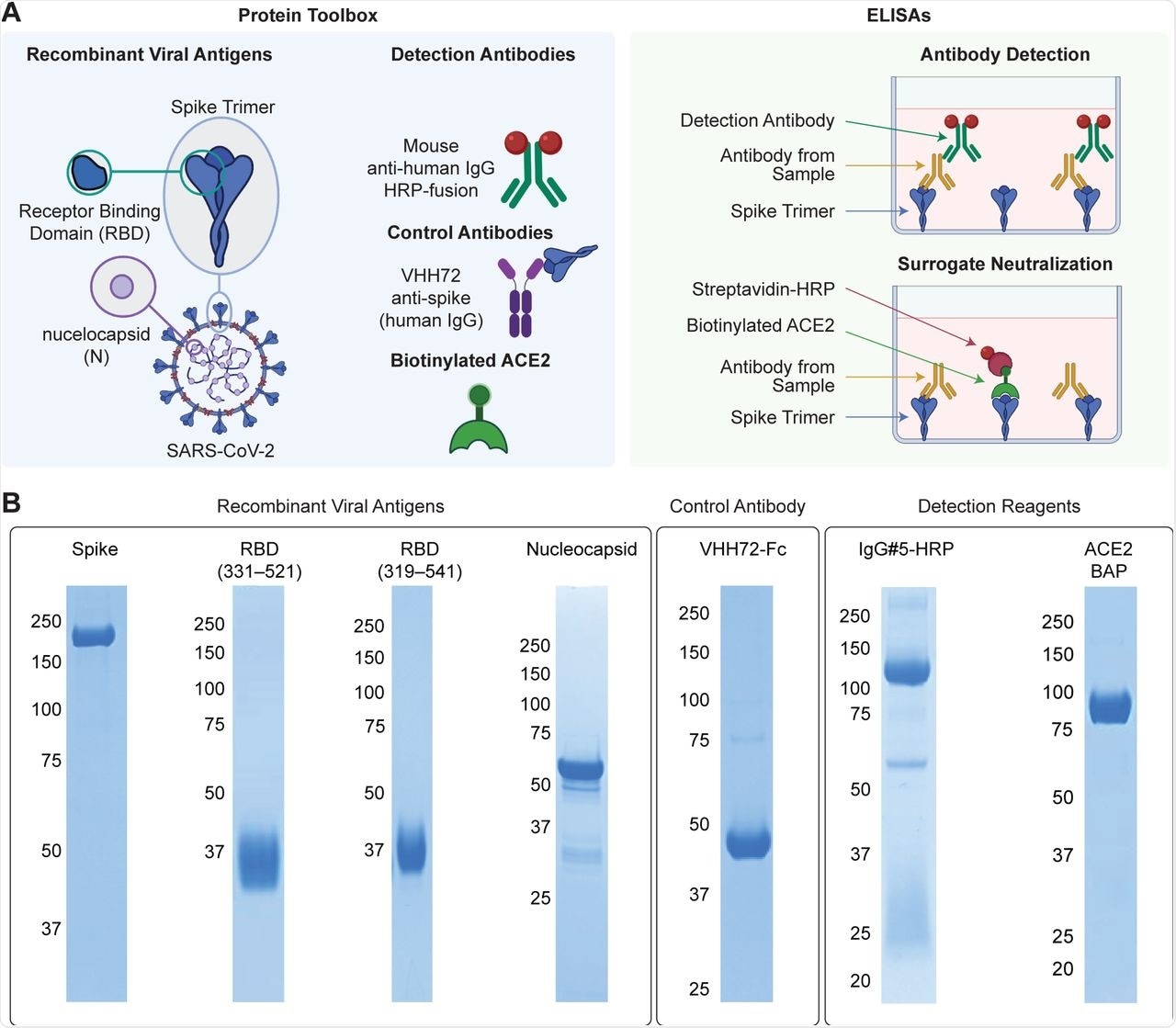 “Made-in-Canada” reagents for SARS-CoV-2 serology (A) Reagents comprising the protein toolbox (left panel) are used in high-throughput plate-based ELISAs for antibody detection and surrogate neutralization (right panel). (B) The reagents were analyzed on Coomassie-stained polyacrylamide gels to assess their purity. Molecular weight markers (kDa) are shown to the left of the gels.

Comparison of the ‘Made in Canada’ solution to the WHO reference standard for both Toronto and Ottawa showed a high correlation between both the labs. The DBS testing result indicated that the use of two 3 millimeters (mm) (3.2 mm in Ottawa) punches helped to increase reproducibility and flexibility when serum and plasma samples were not ideal.

Therefore, the ‘Made in Canada’ proteins that were produced in Canada could enable the up-scaling of standardized serological assays that would permit nationwide data comparison and aggregation. The assay is currently being used in various Canadian studies, such as the Canadian COVID-19 Antibody and Health Survey from Statistics Canada, seroprevalence studies with CBS, the Action to Beat Coronavirus study, and the Canadian Partnership for Tomorrow’s Health study.

The study had certain limitations. First, the study optimized the concentration of serum, plasma, and DBS for convalescent individuals; however, at very high antibody levels, measured antibody levels will saturate the assay preventing correct measurement.

Second, optimization of seropositivity results to limit false positives can affect the overall sensitivity of the assay. Third, the assay used the original Wuhan-Hu-1 strain; however, the sensitivity of the assay can decrease with new variants. Finally, assays using the SARS-CoV-2 N protein have less sensitivity and specificity and should therefore be used to define vaccine breakthrough infections.