Made by Moderna and Pfizer, the updated vaccines were advertised as being able to boost protection against Omicron subvariants that have become world-dominant.

The US Government spent $3.4billion in taxpayer money for 105million doses of the shots to help protect against the mild but highly transmissible strains this winter. The UK has purchased at least 26million doses.

But research by Harvard and Columbia University found ‘essentially no difference’ between the immunity gained from the old or new shots.

In both studies, people who had already been triple vaccinated were given either a standard Covid shot or an updated bivalent booster.

Blood samples were taken three to five weeks later and analyzed for antibodies and T-cells — immune cells that fight off the virus.

Dr David Ho, a microbiologist at Columbia University who led one of the studies, said: ‘We see essentially no difference [between the shots].

‘We can’t say that a few months from now there won’t be any difference… [but] at least at this time point, there’s no discernible benefit.’

Uptake of the jabs is sluggish in the US with less than 19.5million out of the 225million people who are eligible having come forward.

President Joe Biden got his updated booster yesterday — his fifth shot to date — in the latest White House effort to boost the numbers getting inoculated. 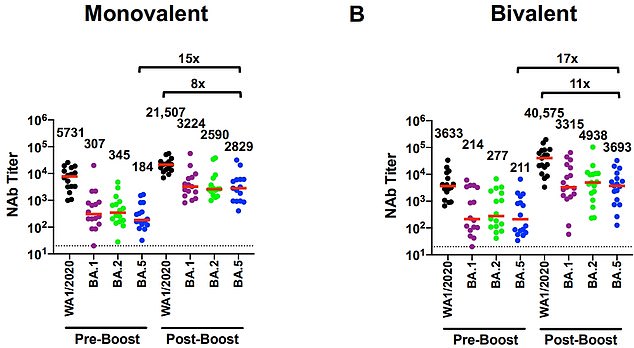 The above graph shows antibody levels in people given the old vaccine (left) versus the bivalent (right). It shows there is virtually no difference in immunity triggered between the two. For the original booster levels of antibodies were boosted by 15 times compared to before shots, while for the updated one they were raised by 17 times. But scientists said this was not significant, meaning the difference could be down to chance 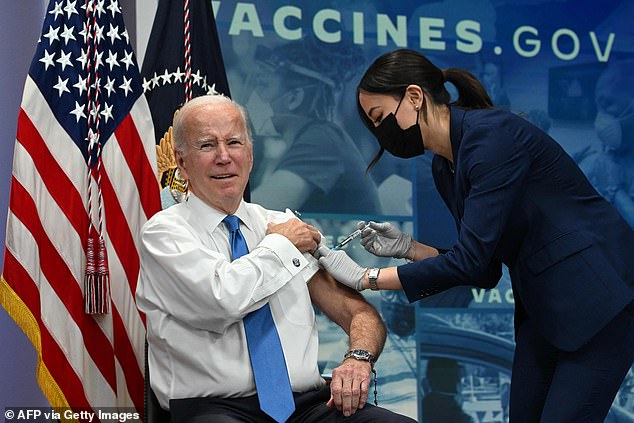 President Joe Biden pictured yesterday receiving the updated bivalent booster. It is his third booster to date, and fifth jab overall. He urged others to get the jab

President Joe Biden received his third COVID booster shot on Tuesday and encouraged all Americans to get their next shot in the arms ahead of the holidays.

‘The truth is not enough people are getting’ their booster, the president said. ‘Get the shot.’

He warned, that with cases rising in Europe as the cold weather comes, the death rate could spike in the United States.

‘Let me be as plain as I can. We still have hundreds of people dying each day from covid in this country. Hundreds. That number is likely to rise this winter. But this year is different from the past. This year nearly every death is preventable,’ he said.

‘New variants emerge here in the US and around the world,’ he noted, adding that it was important to get updated shots as ‘the weather getting colder; people will spend more time indoors.’

The updated Omicron shot works the same way as the original jabs.

These vaccines see mRNA — the building block for proteins — injected into human cells.

It codes for cells to manufacture Covid spike proteins — which the virus uses to invade cells — triggering an immune response.

The old boosters shore-up protection against the Wuhan strain.

But the updated versions also aim to boost protection against BA.4 and BA.5 which have risen to prominence.

In the Columbia trial, scientists recruited 40 people who were already triple vaccinated against Covid.

Half were given a fourth dose of the original vaccine, while the other half received the updated booster shot. It was not clear whether it was from Pfizer or Moderna.

Blood samples showed antibody levels against the variants were ‘slightly higher’ in those who got the updated booster three to five weeks later.

But this was not significant, meaning the difference may be down to chance rather than one shot producing a stronger immune response.

In the Harvard trial, scientists looked over data from 33 people in Israel.

Like in the other study half received the original booster but the other half got the bivalent Covid vaccine.

The scientists also measured T-cell levels, but saw no change in their levels between the two groups.

Other areas of the immune system were not measured, however.

But the independent results are the first sign that the new jabs may not be as effective as hoped.

Dr Dan Barouch, a virologist at Harvard who led the study, said: ‘Unfortunately, neither one increased T-cell responses very much.

‘We believe that T-cell responses in addition to antibody responses are important for protection against severe disease.’

Earlier this year Pfizer and Moderna claimed their updated shots sparked a larger immune response than the original Covid vaccines.

The Food and Drug Administration (FDA) later approved the shots based on data from mice and previous human trials using a slightly different booster shot.

At the time, little was known about how protective they might be in people.

It comes as the US urges people to get the updated booster vaccine with uptake languishing at 8.5 per cent more than a month into the roll out.

President Joe Biden got his fifth Covid shot yesterday and called on other Americans to also get the booster.

But it still lags behind with 19.4million of the 225million eligible over-5s coming forward.