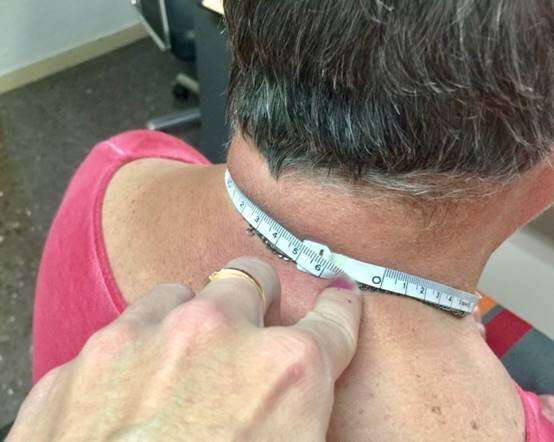 Researchers at the Miguel Servet University Hospital in Zaragoza (Spain) have analysed the ratio between the perimeter of the neck of people living in old people’s homes and the probability of malnutrition. Values below 37.8 cm in males and 35.2 cm in females indicate risk.

Professionals working in nursing homes often detect possible cases of malnutrition by measuring certain body circumferences of the elderly, such as the arm or calf. Now, a team of researchers from Zaragoza has found another part of the body that can serve as a reference: the neck.

To carry out their study, the authors cross-checked the anthropometric data of 352 elderly people from five public homes in Zaragoza and with an average age of 83, with their results in a questionnaire called Mini Nutritional Assessment (MNA). This assessment tool is commonly used to identify malnourished elderly people or those at risk of being malnourished.

Statistical methods were then applied to find the association between these two parameters, and the results, published in the journal Nutrition, confirm that the circumference of the neck -together with that of the calf- presents the best predictive value when diagnosing the risk of malnutrition among residents.

“In our study, the cut-off point for detecting the risk of malnutrition was 37.8 cm in men and 35.2 cm in women, a limit to be taken into account by the staff of the homes,” says Beatriz Lardiés, a researcher at the Miguel Servet University Hospital and co-author of the study.

Once the risk of malnutrition—which affected 48.3% of the women and 45.5% of the men analysed—is detected, it is necessary to carry out a complete nutritional assessment and to consider other clinical and analytical parameters in order to check whether a patient is really malnourished. If this turns out to be the case, the necessary measures to reverse this situation should be taken immediately.

“The diagnosis of malnutrition cannot be made with a single anthropometric parameter, like the perimeter of the calf or the circumference of the arm, but it can help identify it,” Lardiés says.

The researcher points out that, as this study has been carried out in nursing homes, “its results can be extrapolated to populations with similar characteristics, but we cannot ensure that the cut-off points detected are valid in other population groups.”