Music pillows for A&E! Giving patients awaiting emergency surgery a cushion with a built-in SPEAKER can ease their pain and anxiety, study claims 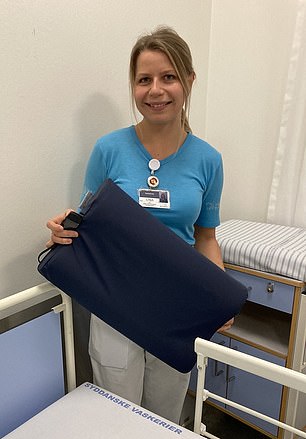 Lisa Antonsen, a nurse at Denmark’s Odense University Hospital who carried out the research. She is pictured carrying the pillow, which contained a speaker with an MP3 plugged into it for 30 minutes during the waiting time

Now it could be used to ease the pain and anxiety of patients who are waiting for urgent surgery, too.

Patients waiting in A&E for an emergency procedure are less anxious, more relaxed and experience less pain if they are given a special music pillow to rest on, a study has found.

Experts assessed 30 people aged 18 to 93 who were waiting for surgery for health emergencies such as appendicitis, intestinal obstruction, abscess or inflammation of the gallbladder.

They were all offered a pillow which contained a speaker with an MP3 plugged into it for 30 minutes during the waiting time.

Half of the patients then had to rate their pain, relaxation and well-being on a visual scale ranging from 0 to 10.

Lisa Antonsen, a nurse at Denmark’s Odense University Hospital who carried out the research, found that patients experienced a decrease in pain from an average score of 4.8 to 3.7.

Ms Antonsen, who presented her findings to the European Emergency Medicine Congress, said she was inspired to do the research after noticing that patients waiting for acute surgery were ‘often nervous and even anxious’, especially due to the uncertainty of not knowing when their surgery would take place.

‘I knew that music has been shown to have positive effects on pain, relaxation and well-being in other healthcare settings, but it has never been tested before with patients waiting for acute surgery,’ she said.

She described one woman in A&E in November 2020: ‘She was upset.

‘Her face was tense, and you could tell that she had just cried. She said that it had been a tough day.

‘Thus, the music session provided a break from the acute hospital environment.’

She added that a larger study is needed to find out ‘if music itself has an effect on pain, relaxation and general well-being’.

The music pillow used in Ms Antonsen’s pilot study continues to be used in her A&E and she hopes to make it permanent.

Professor Youri Yordanov, from the St Antoine Hospital A&E in France and who was not involved in the research, said: ‘Emergency departments are stressful places for patients, who have often arrived in them unexpectedly due to suddenly deteriorating conditions or accidents.

‘Initiatives such as this, that appear to contribute to a reduction in patients’ anxiety, and also the pain they are experiencing, are very welcome.

‘Music helps people relax at the best of times. Now this study suggests it can do the same during stressful times too.’