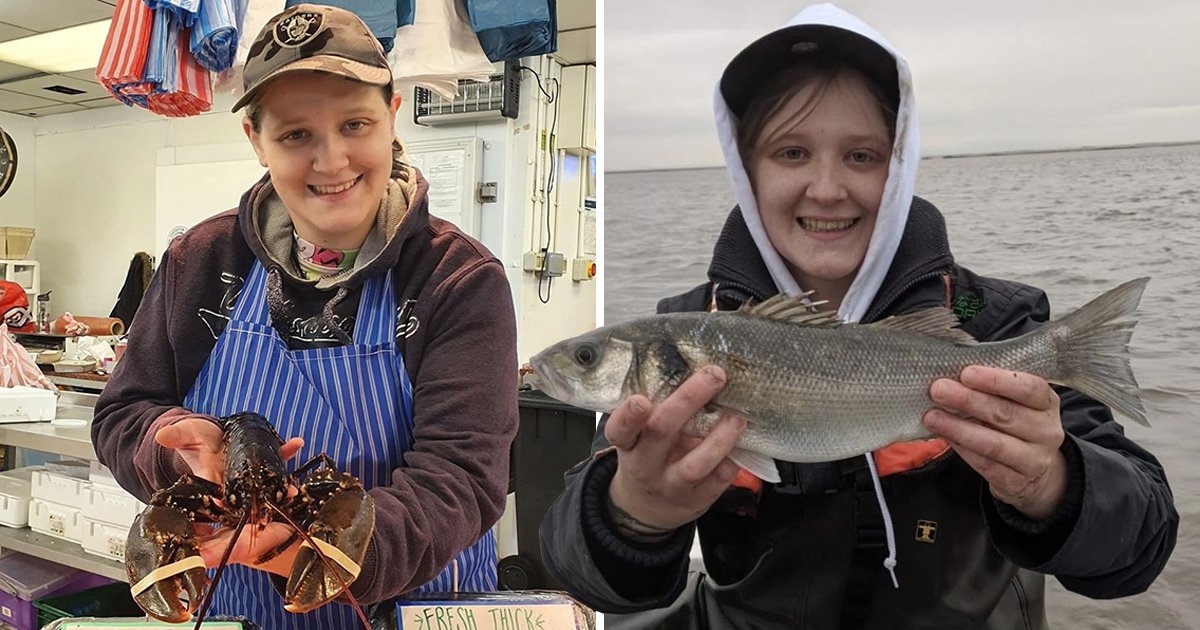 It wasn’t until a terrified friend warned the mum that if she didn’t quit, she would likely die, that Jess knew she needed to make a dramatic change.

She went cold turkey, took her son back into her care (her mother had been looking after him), and, in 2015, she met her now fiancé, Paul Murphy, 47, a market trader, with whom she had another son, who is now three.

When the pandemic hit, Jess was working on her ex-partner’s fish stall at Bolton Market.

She was so determined not to let the business fail that she launched a Facebook page offering local deliveries, drawing on the resilience she had gained as a result of her journey.

Taking everything from fresh fish to meat, poultry, fruit and veg to people’s doors, her venture was such a resounding success that she is now running her own fishmonger stand, Wet and Wild Seafood, sited on the very Bolton Market stall once owned by her dad.

She now lives in Bolton with Paul, her two sons, their bull mastiff dog, Bane, horses Bobby and Jinx, and a to-be-named pet owl.

‘Drugs were quite a normal part of my everyday life for a while and I struggled with addiction for many years,’ Jess said.

‘My wake-up call came in 2015 when a friend warned me that I was going to end up dying young if I didn’t sort myself out. I had a son, so I had a duty to get clean and now I have two children, I live for my kids.

‘Running the business, I only get around three hours sleep a night, but it’s all worth it, as my life is wonderful now.

‘And I love the fact that I’ve ended up right back where I started, at my dad’s old stall.’

Jess grew up with her mum, two younger sisters and her dad, Peter Kay, 60, who ran a meat and fish stall, Premium Fish and Poultry, where her business is now – selling it 15 years ago to run Top Shop, a Bolton convenience store.

In 2001, when she was 10, her parents separated, but she continued to help on the stall – even when she became a rebellious teenager and after she became addicted to drugs.

In 2007, aged 16, Jess started a National Diploma in Equine Management at college, only to drop out after a few weeks when she discovered she was pregnant.

After giving birth in 2008 she returned to work at the market, but her relationship with her son’s dad ended a year later and her life began to spiral.

‘I was getting my head around rent and council tax and I just got overwhelmed with work and looking after my son, so in 2010 he went to live with my mum – although I always visited,’ she said.

Soon Jess’s drug use had drastically increased, and she became homeless for two years.

‘I fell deeper and deeper into that lifestyle,’ said Jess.

‘I’d still turn up to work every day, but 60 per cent of the time I was sleeping rough. There was a park bench under a tree I used to go to, and I’ve slept in buildings and houses that I knew were empty.

‘I’d lost a lot of friends who didn’t want to see what I was doing to myself.

‘But this one lad pulled me aside and said, “I love you like family – if you keep going like this, you’re going to die”.’

Her friend’s words hit home, and Jess went to a GP for help to beat her addiction.

She said: ‘I had to lock myself in. I went through weeks and weeks of going cold turkey, as my body withdrew.’

Wanting a fresh start, in early 2017 Jess began work on a stall at another of the city’s markets, where she met Paul.

The couple moved in together and, later that same year, Jess was pregnant again with her second son, born the following year.

Desperate to make the most of her newfound stability with her happy family, a few months later her eldest son moved in with them.

She said: ‘I’ve got a picture of my eldest the moment he met his little brother in the hospital and you can just see the love there instantly. No one in their right mind would keep the two of them apart.

‘It was amazing to be together. I felt I’d proved I was a good mum. It was the moment I’d lived for.’

Returning to work at Bolton Market later that year, when the pandemic hit her happiness was threatened, as trade was badly hit by the lockdowns.

Not to be defeated, Jess sprang into action, instead taking their produce to their customers.

She said: ‘I got straight on Facebook and set up a page, which quickly got 1,500 followers.

‘I was also the only market trader who would deliver stuff from other stalls – so I became like the market personal shopper.’

As customers began to return, Jess kept up the deliveries – and soon realised it was time to branch out on her own.

By a happy coincidence, her dad’s old market stall became available and she saw setting up shop there herself as a good sign.

Now, Jess’s typical day starts with rising early – between 12am and 2am – to speak to the fishermen about the catch, before heading down to the stall for 4am to set up in preparation for the first customers roll in from 5am to 6am.

Her business has been a huge success, and Jess is so proud of how far she’s come.

‘I’m running on three hours sleep a night at the moment!

‘I can’t believe how life has turned out. I’ve never been happier.’