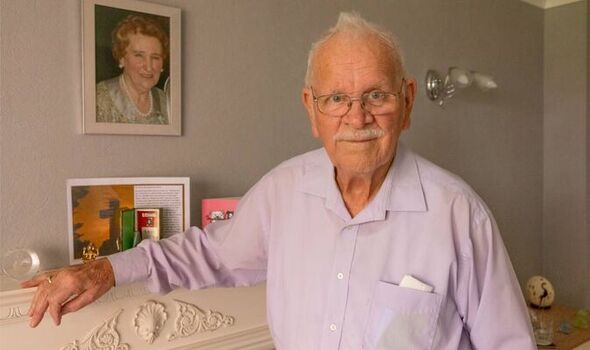 She had travelled to Dignitas’s clinic in Switzerland aged 78 after becoming ­terminally ill with breast cancer and Parkinson’s disease. Len, her husband of 55 years, has never wavered in his support for her decision to end her life and campaigns for a change in UK law on assisted dying. He said: “There was nothing negative about it.”

The Daily Express Give Us Our Last Rights crusade supports Dignity in Dying’s call to give adults who are ­terminally ill, mentally competent and expected to die within six months the option of an assisted death.

Len and Stella married in 1964, and had daughters Julie, Lorrayne and Nicola. The couple loved to travel, with Stella clocking up 74 countries.

Len, 82, said: “We had a very special marriage, one made in heaven.” Stella was ­diagnosed with cervical cancer in 1979, ­followed by breast cancer ­several years later. Both were ­successfully treated. The ­couple renewed their vows on their 50th ­anniversary in 2014. Just six months later she was ­diagnosed with Parkinson’s and stopped enjoying life.

In 2018 the breast cancer returned and she needed a mastectomy.

Len added: “She said: ‘I can’t go through that.’ She wanted Dignitas.” So the couple spent six months gathering ­documents and ­journeyed from their east London home to Zurich with their daughters in August 2019.

Dignitas medics and staff kept checking at each stage that Stella was sure.

The night before her death the family played cards and Stella was so relaxed it was as though “she had gone back 20 years”, Len added.

On the day, she drank life-ending medication. Len said: “Her eyes closed. She waved, her breathing slowed down until it stopped and they told us she had gone.”

Now he wears a ring on his right hand containing some of her ashes. The grand-father-of-five campaigns to help others who cannot afford the £10,000 cost.

As they must be well enough to travel, some end their lives earlier than they would if they could do so in the UK. Len added: “Something needs to be done.”

This month the Health and Social Care Bill returns to the House of Lords. Among the amendments to be considered over the coming days is my own.

It concerns assisted dying but not on the rights or wrongs of legalisation, but on the urgent need for full and proper debate.

My amendment would require the Government to draft assisted dying laws and present them to Parliament within a year.

The Government wants to remain neutral about a change, and this amendment does not commit the Government.

It provides MPs and peers with a full and fair opportunity to examine the evidence, with a free vote.

In the Scottish Parliament the path to reform is clear and sensible. Lib Dem MSP Liam McArthur’s Assisted Dying Bill has the time and assistance to proceed.

In Westminster, meanwhile, backbench Bills are doomed. Baroness Meacher’s Assisted Dying Bill is likely to sink under 200 amendments, almost all a filibustering tactic.

This is despite YouGov finding last October that three-quarters of Britons back the Meacher Bill.

Instead we have this Fabian strategy of delaying progress for as long as possible, causing suffering for dying people and loved ones, and distancing Parliament from the people.

The question of how, when and where we die is too important to be abandoned by a process that is not fit for purpose.

The Government must break this stalemate and ensure the issue is given the time, attention and respect it deserves.