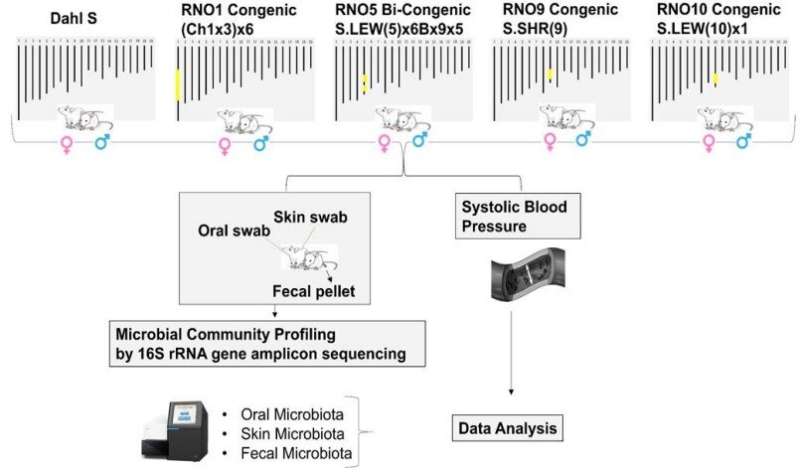 New research in rats finds specific bacteria populations in the mouth and on the skin may be beneficial in blood pressure regulation. The first-of-its-kind study is published ahead of print in Physiological Genomics.

More than half of the world’s population has high blood pressure (hypertension), one of the leading risk factors in developing heart disease. Blood pressure regulation has been found to stem from how genetics, lifestyle factors and the body’s microbiota—the colony of bacteria and other microorganisms in the body—work together.

Previous research from the University of Toledo College of Medicine and Life Sciences in Ohio showed for the first time an association between gut microbiota and hypertension in rats. However, microbiota in other areas of the body may also play a role in salt-sensitive hypertension (high blood pressure related to a high-salt diet). For example, studies have shown higher-than-normal sodium content in the skin of people with high blood pressure.

In their new study, University of Toledo researchers looked at the skin and oral microbiota in a rat model of hypertension. Male and female rats initially followed a low-salt diet after weaning and then were fed a high-salt diet for up to four weeks. The research team collected microbiota from the mouth, skin and feces of the hypertensive rats when they were young and monitored their blood pressure. They found an abundance of the bacteria Actinobacteria—bacteria known to reduce nitrate and convert it to nitric oxide—in the oral cavity. Nitrate is a naturally occurring compound that can be harmful at high levels. Nitric oxide is a gas that helps blood vessels dilate and lowers blood pressure.

The researchers also observed that having a higher abundance of the group of bacteria called Cyanobacteria on the skin was beneficial for rats to keep their hypertension in control. Cyanobacteria are salt tolerant, which may play a role in blood pressure regulation through maintaining sodium balance in the skin.

“This study is the first to report oral and skin microbiota as potential modulators associated with [blood pressure],” the research team wrote. The researchers recommend prioritizing the further study of the benefits of Actinobacteria and Cyanobacteria to treat sodium-induced high blood pressure.