Mother, 33, battles mystery allergy that makes her look like she has had ‘dodgy lip fillers’ and leaves her own son terrified of her

A mother claims her mysterious skin reactions leave her looking like she has had ‘dodgy lip fillers’.

Kelly Marsh, from Canvey, Essex, saw her lips, eyes and face double in size during her first reaction seven months ago.

The 33-year-old was diagnosed with chronic spontaneous urticaria, which causes hives to break out on the skin without any known cause.

What starts as a small rash can leave Ms Marsh, a make-up artist, covered in large itching and burning welts, making it impossible for her to work.

She has thrown out shampoos, fragrances and washing powders, and restricted her diet to rice, vegetables and plain chicken – but to no avail.

Now, Ms Marsh – who claims her son is terrified of her when her reaction flares up – fears her sick pay will run out and she will be left struggling to pay her mortgage. 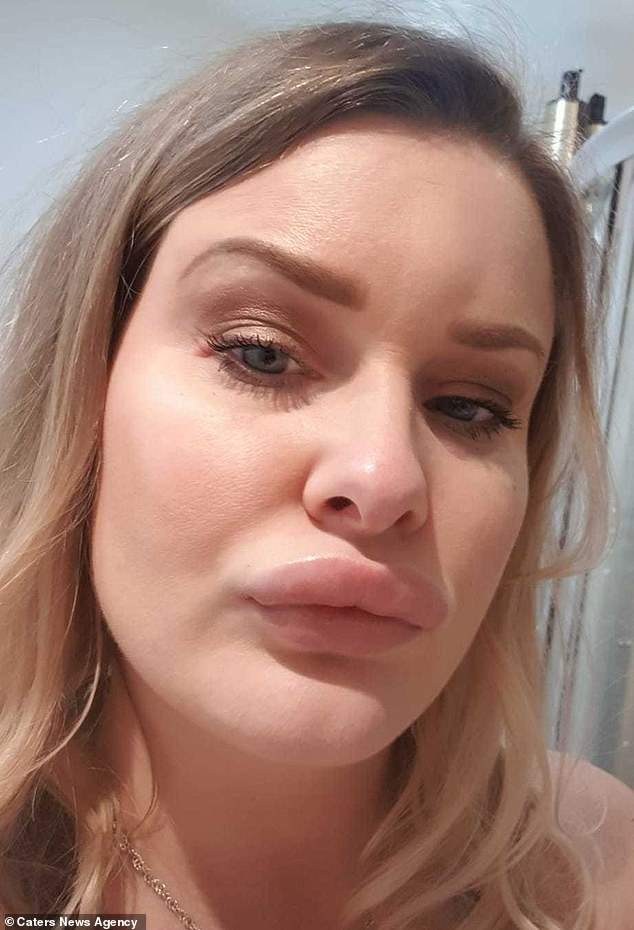 Kelly Marsh, 33, from Canvey, Essex, saw her lips swell during her first reaction seven months ago, leaving her looking like she had ‘dodgy lip fillers’ 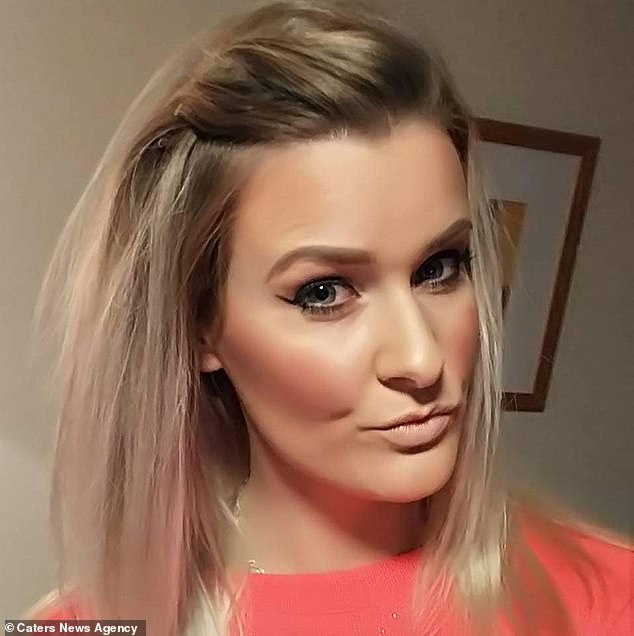 The make-up artist was diagnosed with chronic spontaneous urticaria – a debilitating disease that causes an allergic reaction without any known cause. Pictured on a normal day 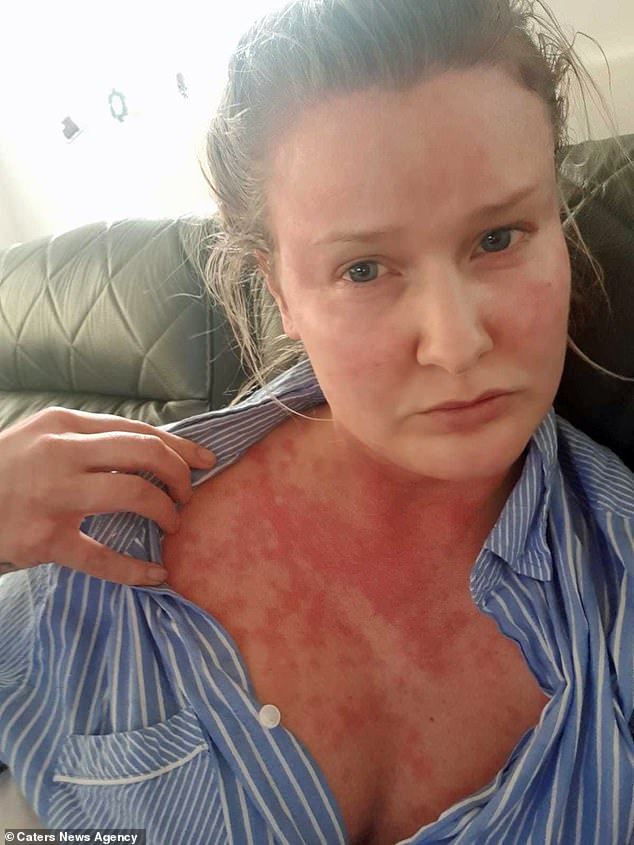 Ms Marsh, who is also a business manager, said: ‘I don’t even know myself what causes it, but it’s affecting everything, it’s like I’m a prisoner in my own skin.

‘I literally can’t find anything. I changed the washing powder to Fairy Non Bio, went on a diet of bland food but what causes a reaction one day isn’t the same the next.

‘It’s hard to explain without bursting into tears. You just sit here itching and burning, unable to go anywhere, to eat or even sleep – I wouldn’t wish this on my worst enemy.’

Ms Marsh initially dismissed her first reaction, upon noticing a small rash develop on her skin.

But the next morning her face had swollen out of recognisable proportion – and her ten-year-old son, Jack, was terrified.

She said: ‘The first time it happened, I had a couple of blotches on my arms and legs but didn’t think anything of it. The next day I woke up unable to recognise myself.

‘Suddenly my lips, my eyes and whole face had swollen up, I sent a picture to my manager to explain why I couldn’t come into work and she asked, “Who is that?”

‘My lips were huge. I looked like I had dodgy lip fillers, it didn’t look like me at all.

‘It went down in a couple of days thanks to antihistamines. I didn’t think anything more of it, but then in December it came back with vengeance.’ 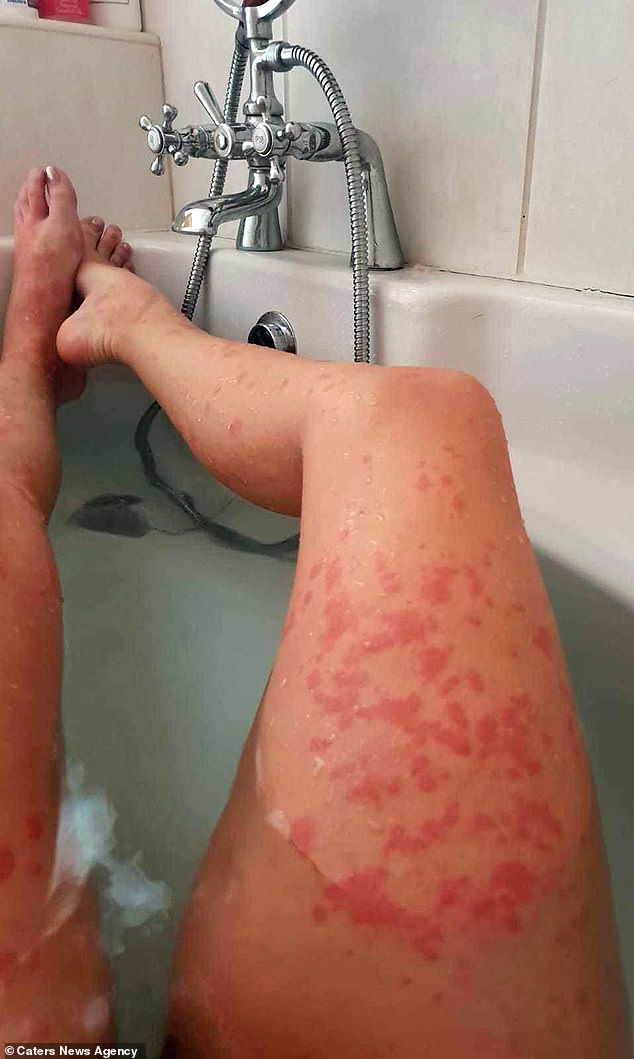 The hives range from small pin prinks to giant welts that cover large swathes of her body. Pictured, the skin on her leg during a flare-up 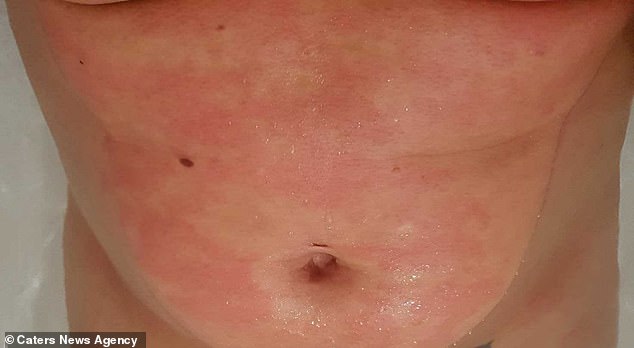 A reaction in December lasted for two months, with her struggling with itchiness from the welts and burning pain that could only be relieved with an ice-cold bath 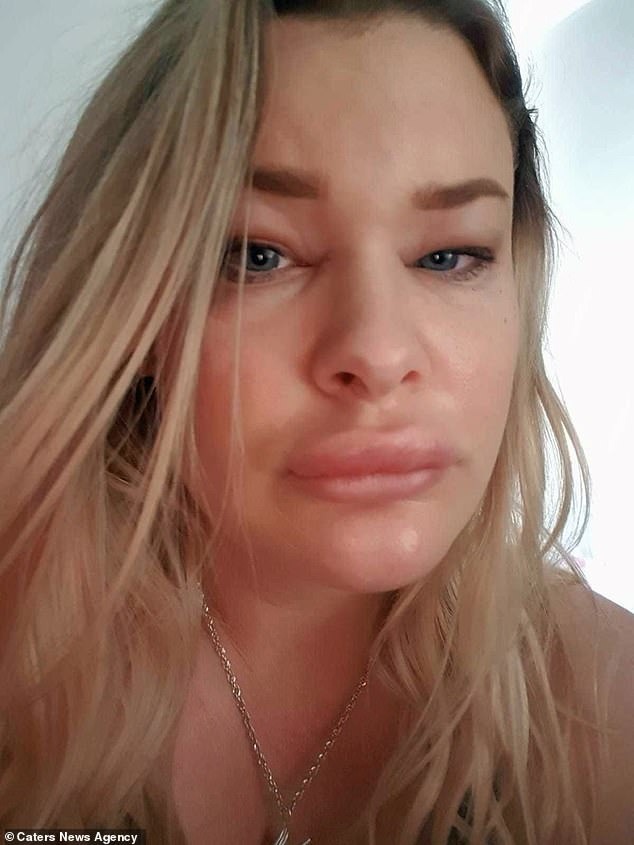 When Ms Marsh’s lips swelled for a second time (pictured), she was hospitalised on Boxing Day 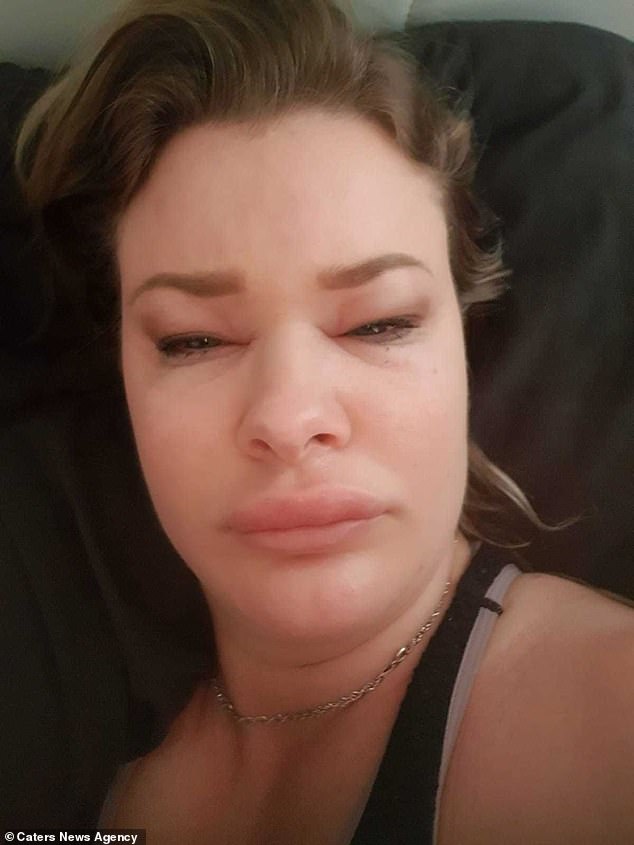 Ms Marsh’s reaction in December started off as small blotches on her skin which she believed were caused by dust from Christmas decorations. Pictured, during a reaction

After more of the small blotches appeared on her skin, Ms Marsh believed it was an allergy to dust rustled-up by Christmas decorations.

But when her lips started to swell once more, she has hospitalised on Boxing Day and later given an EpiPen in-case her throat began to close.

The reactions lasted for two months, with her struggling with itchiness from the welts and burning pain that could only be relieved with an ice-cold bath.

Ms Marsh paid £200 for a 45-minute private health care appointment to receive a diagnosis after being told she wouldn’t be able to see a specialist on the NHS until June.

Chronic spontaneous urticaria by definition lasts for more than six weeks, according to the British Association of Dermatologists.

Broadly, urticaria, also known as hives, is common, and affects about 20 per cent of people at some point in their lives.

Ms Marsh said: ‘I was in a raw state every day from itching, with my skin completely raw, nothing helped other than taking a freezing cold bath.’

Now, when Ms Marsh suffers a reaction she has been told she may need to seek hospital treatment for steroids and an IV of antihistamines – which she also takes at home. 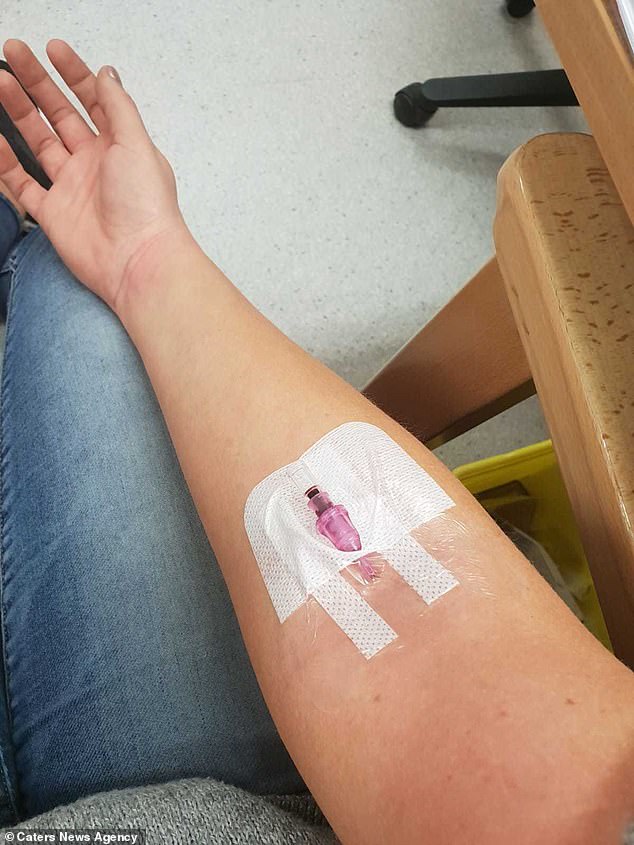 Now, when Ms Marsh suffers a reaction she has been told she may need to seek hospital treatment for steroids and an IV of antihistamines – which she also takes at home. Pictured, while in hospital having treatment 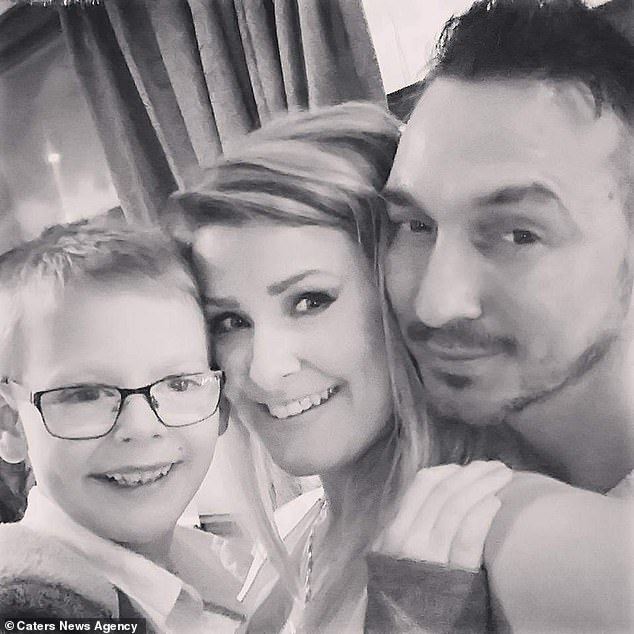 Ms Marsh’s son, Jack, who is ten years old, was scared of his mothers change in face. Pictured with her fiance, Steven, 37, before the reactions started 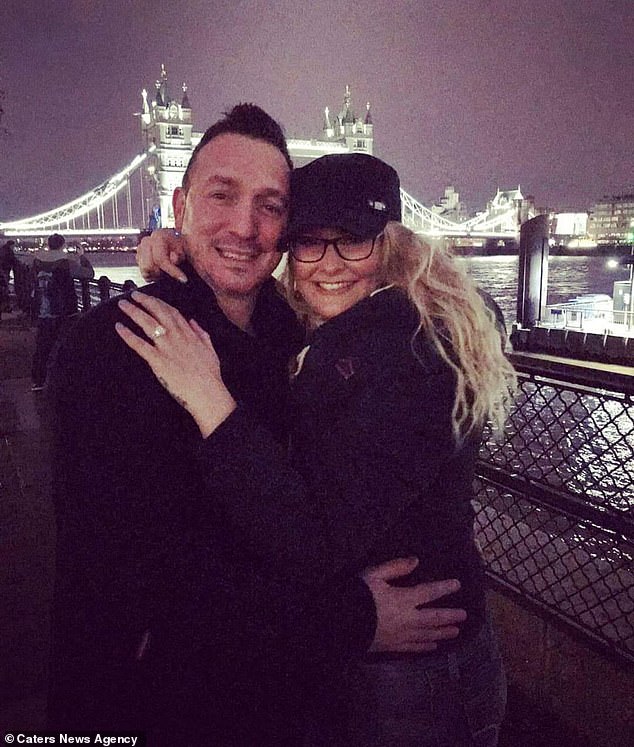 Ms Marsh worries her relationship with her partner, Steven, will be affected

Ms Marsh, whose life has been turned upside down, said: ‘The antihistamines make me so drowsy that when I take them I sleep for half of the day and then can’t sleep at night. It just takes everything out of you.

‘It’s honestly awful and embarrassing having to call in sick so often.

‘I take a lot of pride in how I look, especially for my job as I need to look nice, and I worry it’s affecting my relationship.

‘I don’t feel like I’m attractive to my other half [Steven, 37] , even though he tells me it hasn’t affected him at all.

‘To get through it, we try to make jokes when my face swells up, we say it looks like I’ve had a “glorious lip job that’s gone wrong” or “dodgy plastic surgery”.

‘It’s the only thing you can do – you either laugh about it or cry.’

A biological injection treatment called omalizumab has recently been approved for the most severely affected chronic spontaneous urticaria patients, only available in specialist clinics.

In a bid to return to a normal life, Ms Marsh is making a diary of her symptoms in the hope of getting the injection.

She said: ‘People struggle to understand why doctors can’t just cure it.

‘I tried everything I could from not washing my hair with shampoos, avoiding perfumes, scents and altering my diets.

‘I’m worried I’ll run out of sick pay soon and about not being able to afford our mortgage.’

Ms Marsh has found comfort in the support of others with her condition.

She said: ‘I knew others had to be suffering out there too and it shocked me how many there were.

‘Some people have had it for 25 years. I don’t want to deal with it for that long.’

WHAT IS CHRONIC SPONTANEOUS URTICARIA?

Urticaria, also known as hives, is common, and affects about 20 per cent of people at some point in their lives.

Urticaria consists of pink or white raised areas of skin resembling nettle rash, known as wheals, which are usually itchy.

It is caused by the release of histamine from cells in the skin called mast cells.

There are many different types of urticaria depending on the triggers. But the most common form of urticaria is called spontaneous urticaria.

In this type no cause is usually identified and often patients have hives and angioedema occurring together.

Angioedema is characterised by deeper swelling in the skin, which may take over 24 hours to clear. It is not usually itchy and can affect the lips and tongue. Some patients have one or the other condition, others have both.

Spontaneous urticaria with or without angioedema is usually divided into ‘acute’ and ‘chronic’ forms.

In ‘acute’ urticaria, the episode lasts up to six weeks. Chronic urticaria, by definition, lasts for more than six weeks.

Often a specific cause cannot be found. Sometimes an infection such as a cold can be a trigger.

Other triggers include physical contact with an allergen such as an animal, sun exposure, the cold, water, or a specific food or medicine.