More than 20,000 cancer patients miss out on radiotherapy every year because the NHS doesn’t refer them for it, report claims

More than 20,000 cancer patients miss out on radiotherapy every year because the NHS does not refer them for it, a report claims.

A report by MPs on the ‘secret scandal’ of radiotherapy said cancer patients were being denied the treatment because it was seen as an expensive option for the NHS.

The report, produced by the All-Party Parliamentary Group on Radiotherapy, added that workforce shortages of radiographers exacerbated the problem.

It criticised the ‘archaic system’ that pays NHS trusts per fraction of radiotherapy delivered, rather than per treatment course.

This means trusts have financial incentives to provide older, less effective treatments, as more modern treatments such as radiotherapy earn them less money.

But the NHS has hit back against the claim and said figures used are outdated, and that it’s ‘completely wrong’ to say patients are missing out. 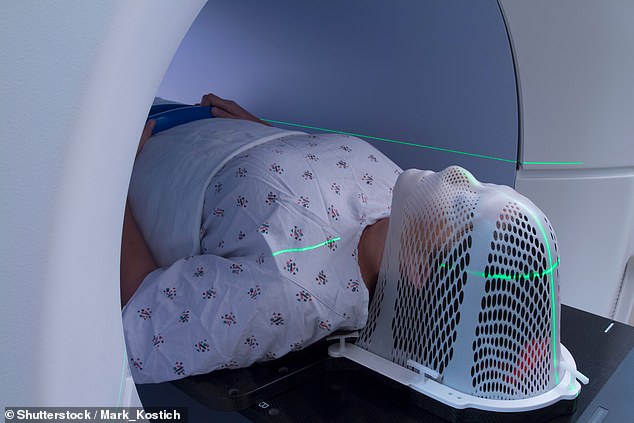 Around five per cent of the NHS cancer budget goes towards radiotherapy, which kills tumours with high-energy radiation and is more likely to be prescribed for cancers which are diagnosed early.

The proportion of cancer patients requiring the treatment is predicted to rise in the next decade as more emphasis is placed on early detection.

But the report said urgent reform is needed if patients are to benefit.

Chairman of the group and former Liberal Democrat leader, Tim Farron said: ‘I am pleased to be able to present the findings of inquiry in this report, which is the culmination of months of hard work on the part of all of those involved.

‘But it gives our group no pleasure to find that so many who need radiotherapy aren’t getting it.

‘As is often the case, it is those with the quietest voice who are being so badly let down by their government.

‘But, with demand for radiotherapy services scheduled to increase, and in the absence of urgent investment, this secret scandal will become painfully public.

Radiotherapy is a cancer treatment in which radiation is used to destroy tumour cells.

It is most commonly delivered as beams of radiation which are targeted at a tumour and are so powerful that the energy destroys the flesh it is aimed at.

Because radiation does not distinguish between cancerous and healthy tissue, it can destroy healthy flesh as well.

This can cause side effects such as pain, sickness, tiredness, hair loss and loss of appetite.

Radiotherapy usually takes multiple sessions over a number of weeks, and it can be used to try and cure a tumour or just to relieve symptoms.

‘The Government must act swiftly to increase funding and reform outdated commissioning processes.’

Radiotherapy is given to around half of all cancer patients at some point during their treatment.

This could be as many as 180,000 people in the UK each year – some 363,000 cancer cases are diagnosed annually, according to Cancer Research UK.

The aim of the treatment is to destroy tumours using radiation, but the procedure damages healthy tissue, too, so is not suitable for all cancers or patients.

The group’s report has triggered a backlash from the NHS, where bosses have denied its findings.

‘NHS England seemed reluctant to accept what seemed the consensus view of most other respondents and there was concern they were presenting evidence in a misleading way,’ the report said.

It claimed NHS England had been unable to justify rationing a therapy called stereotactic ablative radiotherapy (SABR), which uses multiple beams of radiation from different angles.

This was available at fewer than half of the NHS trusts which provided radiotherapy, the report said.

But a spokesperson for the health service argued: ‘It is completely wrong to suggest that patients are missing out on radiotherapy based on this data from 2015 which is not reliable and ignores the fact that since then, the NHS has invested £130million in radiotherapy machines – the largest investment in this area for 15 years.

‘Decisions about who receives the right treatment are difficult which is why they are made by clinical experts.

‘The NHS does fund advanced radiotherapy for lung cancer in 25 specialist centres across the country for those patients where it is clinically appropriate.’