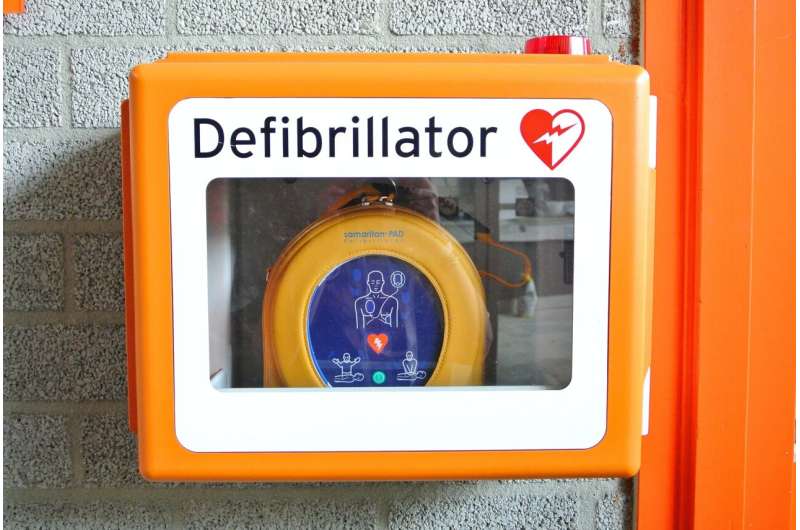 Public access defibrillators are disproportionately lacking in the most deprived areas of England, which are among the communities at the greatest risk of cardiac arrest, according to new analysis led by the University of Warwick.

Using information from ambulances services in England on defibrillators that have been registered with them, researchers have also found that fewer defibrillators are installed in residential areas—at locations such as outside community halls and primary schools—where cardiac arrests are most likely to occur.

The study is part of a project at the University of Warwick funded by the National Institute for Health Research (NIHR), the research partner of the NHS, public health and social care, investigating where defibrillators should be installed to optimize their accessibility and is published in the journal Resuscitation.

Many, but not all, defibrillators are registered with ambulance services. A registered defibrillator is more likely to be used because when a member of the public calls 999 in an emergency the call operator can direct them to the nearest one.

The researchers from Warwick Clinical Trials Unit and the NIHR Applied Research Collaboration (ARC) West Midlands, used data from ten of the 11 ambulance services in England on registered defibrillators in their areas and combined this with information from the Office for National Statistics on the characteristics of the population in those areas, such as ethnic backgrounds, education level and types of employment. They also used the Index of Multiple Deprivation, which is the official measure of relative deprivation for small areas (or neighborhoods) in England.

This allowed the researchers to establish an overall picture of the distribution of registered defibrillators in England, which revealed that the more deprived areas tended to have the lowest number of defibrillators. Only 27.4 percent of areas in the lowest decile of the Index of Multiple Deprivation had at least one defibrillator, compared to about 45 percent in the highest.

Defibrillators are more likely to be placed in areas where people are likely to work rather than residential areas. Areas with a larger proportion of the population that identified themselves from mixed and non-white ethnic background were also less likely to have a registered defibrillator.

However, because there is no legal requirement to register a defibrillator with an ambulance service, there is uncertainty around the number of unregistered ones in these communities. As 999 call operators would not know the location of the nearest defibrillator in an emergency, it means those communities will be experiencing a health inequality compared to less deprived areas.

Lead author of the study, Dr. Terry Brown from Warwick Clinical Trials Unit, said: “We know that cardiac arrests occur more often in deprived areas, but registered defibrillators are more likely to be found in areas where the population is more affluent, predominantly identify as white ethnic, and with high socio-economic occupations. The question is whether this is because they’re not registered in more deprived areas, or because there aren’t any?

“We want to get more defibrillators registered. Any future program that aims to get defibrillators out there should be targeted to the areas that need them most. In particular, they should be put in more deprived communities, and in accessible locations in residential areas given that more than 80 percent of out of hospital cardiac arrests happen in the home. There should be a more evidence-based distribution program to ensure they are accessible.

“If they are registered, more easily accessible, and people had the confidence to use them, we believe there will be an improvement in survival rates from cardiac arrest.”

Many defibrillators are installed by local community groups, often as a result of fundraising efforts, or by businesses. The lifesaving benefits of community defibrillators is substantially reduced if they are not registered with ambulance services. Defibrillator guardians are being encouraged to register their defibrillators onto The Circuit, national defibrillator network. (www.thecircuit.uk).

Sue Hampshire, Director of Clinical and Service Development at Resuscitation Council UK, said: “A cardiac arrest can happen to anyone, anywhere, at any time. Not only is defibrillator use a crucial step in the Chain of Survival, the presence of defibrillators in public places can help raise awareness and stimulate people to think about what they would do in an emergency.

“The findings of this important study show that there currently unacceptable inequalities in the provision and availability of Public Access Defibrillators across the country. Out of hospital cardiac arrests are more likely to happen in the areas with neighborhood characteristics where AED provision is currently lower. If more lives are going to be saved through CPR and defibrillation, a more evidence-based and coordinated approach to their placement is needed and we encourage community groups and other organizations to make use of guidance and existing evidence.”