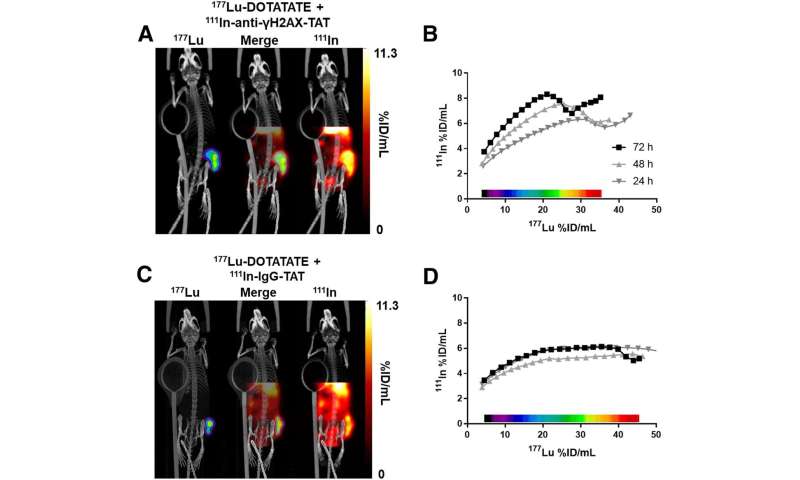 A new proof-of-concept study published in the May issue of The Journal of Nuclear Medicine has demonstrated that molecular imaging can be used for identifying early response to 177Lu-DOTATATE treatment in neuroendocrine tumor patients.

The radiobiologic aspects of 177Lu-DOTATATE, as well as other molecular radiotherapies, are underexplored. Radionuclide therapy is largely delivered to neuroendocrine tumor patients on a fixed dose protocol, regardless of body weight or tumor uptake. To justify any increase or decrease in the prescribed radionuclide dose a sustainable metric is needed; however, no metric currently exists.

“One strategy to develop this metric is to determine if sufficient damage has been afflicted to the tumor, which would allow treating physicians to tailor subsequent doses to ensure therapeutic success,” said Bart Cornelissen, Ph.D., associate professor in the department of oncology at the MRC Oxford Institute for Radiation Oncology at the University of Oxford in Oxford, United Kingdom. “In our study, we sought to image the molecular biological effects of 177Lu-DOTATATE radionuclide therapy by visualizing the DNA double-strand break damage response marker γH2AX.”

In the study, researchers first exposed six cell lines to external beam therapy or 177Lu-DOTATATE and measured the number of γH2AX foci and the clonogenic survival (which indicate the extent of DNA double-strand break damage). Mice bearing the same cell line were then treated with 177Lu-DOTATATE or sham-treated, and static SPECT images were acquired at one, 24, 48 and 72 hours after administration. Immediately after the first SPECT imaging session, the mice were administered 111In-anti-γH2AX-TAT or 111In-IgG-TAT.

In vitro cell lines exposed to 177Lu-DOTATATE were found to have increased γH2AX foci and decreased clonogenic survival, and reacted very differently than to an equitoxic dose of external beam irradiation. The γH2AX foci induced by 177Lu-DOTATATE in the preclinical models were successfully imaged by SPECT in vivo using 111In-anti-γH2AX-TAT. An accumulation of γH2AX signal was observed over the days after administration of 177Lu-DOTATATE, indicating an increase in DNA damage. Furthermore, γH2AX expression revealed intratumoral and interlesion heterogeneity with the absorbed 177Lu dose, suggesting that different parts of the tumor may react differentially to treatment with 177Lu-DOTATATE.