Unlike nuclear DNA, mitochondrial DNA (mtDNA) is circular in nature and organized as mitochondrial nucleoids comprised of DNA-protein complexes that are distributed in the matrix. It is also inherited maternally and several hundred to thousands of copies are present per cell. 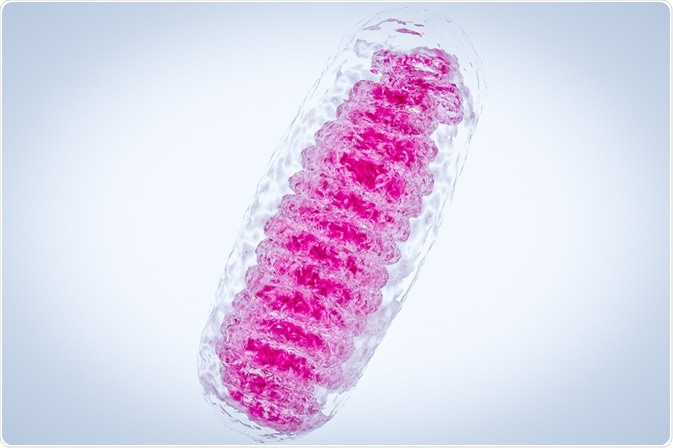 Mitochondrial DNA encodes 13 subunits of the oxidative phosphorylation (OXPHOS) complexes, 2 ribosomal RNAs (rRNAs) and 22 transfer RNAs (tRNAs). These are translated via the mitochondria-specific translation system. Four of the five OXPHOS complexes depend on the synthesis of the mitochondrially-encoded 13 subunits; the remaining 77 subunits, together with various essential proteins, are encoded by nuclear DNA. These total over 1000 and are transported into the mitochondria following translation in the cytoplasm.

How is mtDNA organized?

Mitochondrial DNA is compact in structure and typically lacks non-coding regions (introns) common to nuclear DNA. This means it has a relatively high gene density commensurate with minimal gaps between genes; the exception to this general pattern is the major non-coding region of approximately 1 kilobase located between the tRNAPhe and tRNAPro genes.

mRNA produced by mitochondrial DNA is proportionally over-represented in the total cellular mRNA, comprising 30% of the total content.

Mitochondrial DNA is vitally important as, without it, energy production within a cell comes to a halt. Consequently, its maintenance is essential. It is no surprise, therefore, that mutations and reduction in mitochondrial DNA copy number are associated with several human diseases that affect the nervous system, heart, and brain. This results from the impaired function of the oxidative phosphorylation (OXPHOS) system that is used to produce ATP, the energy currency of the cell.

Mitochondrial DNA replication is a post-mitotic process that occurs throughout the organism’s lifetime. As mentioned earlier, mitochondrial DNA is organized into nucleoids containing various proteins responsible for its maintenance. The most important of these is TFAM, a mitochondrial transcription factor A and member of the high-mobility group (HMG) of proteins, distinguished by the presence of two HMG boxes. TFAM condenses DNA by inducing bending and wrapping into compact nucleoid structures.

A notable feature of mammalian mitochondrial DNA is the presence of a non-coding region, which is triple-stranded in structure. It is termed 7S DNA and forms what is called a D-loop in which the two strands of dsDNA are displaced and separated by a third strand which is base-complementary to one of the single strands. Its roles are speculated to be in DNA organization and functioning in replication

All proteins involved in DNA replication must be imported into the mitochondria following their synthesis in the cytosol. Interestingly, a range of proteins are involved; those which operate in both the cytosolic and the mitochondrial compartments, some which are specialized isoforms.

Several polymerases are required to replicate mtDNA, but the only polymerase present in the mitochondria is Pol γ. This enzyme is responsible for both replication and repair.The structure of the Pol γ complex is heterotrimeric and comprised of nuclear-encoded subunits POLG1 or A and POLG2 or B

POLG1 possesses both 5′–3′ polymerase and 3′–5′ exonuclease activity. The latter confers POLG1 with high fidelity which is approximately 100-fold greater than that of nuclear polymerases.

PolG1 has a 5′ dRP lyase activity which is essential for its role in DNA repair; it is directly utilized during base excision repair. POLG2 mediates high-affinity binding of the holoenzyme to DNA and Pol γ processivity due to its structure. POLG2 extends the ‘footprint’, or are of the DNA protected from DNase I endonucleolytic attack, of Pol γ from 10 to 25 base pairs.

The presence of POLG2 decreases the proofreading ability of Pol γ due to its poor ability to mediate the transfer of the template DNA into the endonucleolytic site – an action required for incorrect base pair removal. Other components that assist Pol γ include the mitochondria helicase Twinkle and MtSSB (SSBP1), a single-stranded DNA-binding protein.

When DNA is unwound at the OH, the mitochondrial single-stranded DNA-binding protein (mtSSB) coats the displaced strand to prevent POLMRT-mediated initiation at random.

The replication fork continues for a total of two-thirds of the genome before encountering the OL. This results in the single-stranded DNA in this region to form a stem-loop structure which protects the short stretch of DNA it encompasses in this region from being bound by mtSSB.

This region is, therefore, amenable to RNA synthesis, as POLMRT binding is permitted. POLMRT is poorly processive and after the synthesis of approximately 25 nucleotides, POLγ assumes the role of elongation at the 3′-end of the primer., and the initiation of L-strand synthesis occurs. The replication of both the L- and H- strands are linked as L-strand synthesis is dependent on preceding H-strand synthesis.

Initiating mitochondrial DNA replication involves a process called priming. This describes the synthesis of short RNA primers by Pol α-associated primase (PriS/Pri1-DNA Primase small subunit), that the polymerase can use as a foundation for 3’ synthesis of DNA replication.

This is imperative to mtDNA replication, since polymerase can only add new nucleotides to an existing strand. The identity of the enzyme (primase) responsible for this is elusive. Evidence of its existence was provided in 1985 and the primase activity was distinct from both Pol γ and POLRMT, the mitochondrial RNA polymerase. In the 20 years following this, no further insight into its identity was revealed, until 2005 when it was revealed that in vitro POLMRT could begin lagging-strand DNA replication.

POLMRT is targeted to the mitochondria via its N-terminal mitochondrial targeting sequence. The C-terminal domain is the sire of catalytic activity and is comprised of conserved sequence blocks. It is structurally homologous to the T7 RNA polymerase, however, unlike T7, POLRMT cannot bind, bend or melt DNA at the promoter.

POLMRT synthesizes primers of 2-18 nucleotides at both the HSP and LSP within the NCR. Transcripts that are initiated at the LSP leave 3′-ends of RNA from which POLγ, the proceeding DNA synthesis enzyme, can initiate DNA synthesis.

Transcription at the LSP is distinct from the HSP in that outcome of transcription initiation is either (a) terminated within the three conserved sequence block (CSB) region and the resultant transcript is subsequently used as a primer for replication or (b) continued transcriptional elongation to form a polycistronic transcript. CSB II promotes transcriptional termination; it may form a quadruplex structure, secondary structures formed by Hoogsteen hydrogen-bonded guanine (G) in G rich sequences.

However, at the LSP persistent RNA–DNA hybrids act as primers for DNA replication and these hybrids produce intermolecular quadruplexes which behave as good transcriptional terminators. This enables the formation of the primers necessary for replication initiation.

CSB II is therefore described as a switch between the processes of transcription and replication – it is partly controlled by the human transcription elongation factor, TEFM, which promoted transcriptional elongation. Full apprehension about how this is controlled remains to be unearthed; for example, it is unknown how the polymerase can extend the primer beyond the quadruplex structure.

When POLγ has synthesized the full mitochondrial genome, the DNA strands are ligated through the action DNA ligase III. To allow for this, correct alignment of both the 3’ and 5’ ends of the DNA must occur; this requires removal of the initiating RNA primers. A prospective enzyme for this purpose is ribonuclease H1 (RNASEH1); this is indicated from studies of mouse embryonic fibroblasts lacking  RNASEH1 in which mtDNA loss occurs.

Following the synthesis of mtDNA, POLγ initiates cycles of polymerization together with 3′–5′ exonuclease degradation at the nick site generated by the latter. This process is termed idling and is necessary for proper ligation to occur. The loss of exonuclease activity prevents POLγ idling, resulting in continued synthesis into the dsDNA beyond the full-length mtDNA. This creates a flap structure which cannot be ligated.

There is another major 5′-end of nascent DNA located approximately 100 bp of RNA-DNA transition sites at position 191 in human mtDNA. How this site is generated is unclear, but it has been speculated to have occurred due to 5′-end processing during primer removal.

In this process, regions downstream the RNA primer are removed resulting in RNA-to-DNA transition sites being separated from the ligation point of the H strand at the end of replication. A mediator of this occurrence is mitochondrial genome maintenance exonuclease 1 (MGME1) which can cut both ssDNA and DNA flap substrates. Further studies determining the roles of both MGME1 and RNASEH1 are necessary to determine how products of replication products are processed, however.