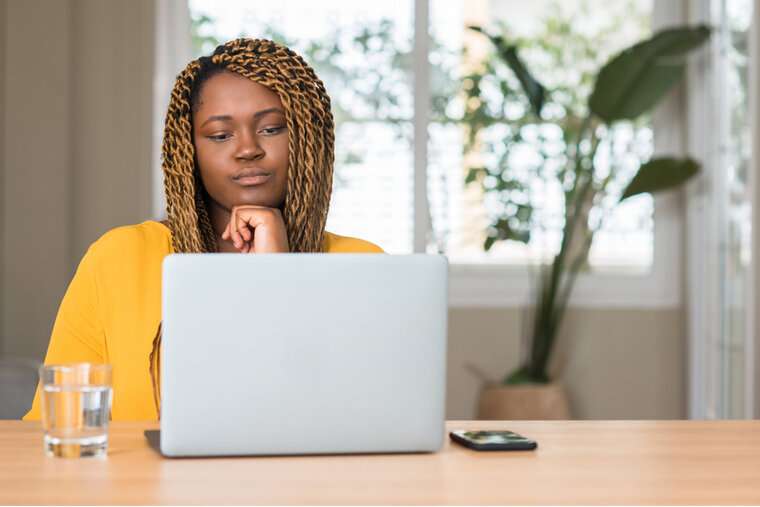 Most people wouldn’t sit in front of a mirror for hours a day, checking themselves out, but the COVID-19 pandemic has found many doing just that.

Video chatting services such as Zoom have become a common way to keep in touch with friends, family and co-workers. But it’s also forced people to sit face-to-face with themselves with a clear view of every pimple, every wrinkle and every awkward expression they’d otherwise never see.

It’s just weird. But is it worse than that? Have our self-perceptions changed?

Research from Washington University in St. Louis suggests that for most women—but not for all women—this new view of themselves has not been accompanied by any changes in how satisfied they are with their appearance. The research, carried out by first author Gabrielle Pfund, a graduate student in the lab of Patrick Hill, associate professor in the Department of Psychological & Brain Sciences in Arts & Sciences, was published in the International Journal of Eating Disorders.

As video chatting became more pervasive, “I thought, this is unlike anything I’ve ever experienced. I wonder if this is affecting people?” Pfund anticipated she might find that people would generally be less satisfied with their appearance the more their video chat usage increased.

She reached out to a former professor, Jennifer Harriger at Pepperdine University, who researches body image and social media. Harriger encouraged Pfund to explore the topic.

For the study, Pfund surveyed 438 women—because, she said, “Women often report more issues with body image than men.” The participants ranged from 18- to 70-year-olds; all but 5% were 55 or younger.

They reported how much time they spent video chatting before the beginning of the pandemic versus after; with whom they shared screens, such as friends, family, co-workers and/or romantic partners; and answers to a few additional questions about their habits related to video chatting.

Researchers then assessed women on a scale of self-objectification, a measure of a person’s conscious thoughts about how they believe others are perceiving them. They were also assessed on how often they compared their appearance to others.

Finally they were asked how satisfied they were with their own appearance.

Taken together, the women’s responses added up to a picture describing how their video chat usage tracked with how satisfied they were with their appearance, given these tendencies to judge themselves, either against others or through the eyes of others.

But what about when it came to analyzing the data and seeing how the women’s satisfaction changed in relation to how much more time they’d spent video chatting?

“The main thing we found is, it doesn’t,” she said. “The number of hours you spend video chatting during the day is not associated with how satisfied you are with either your face or your body appearance.”

“For people who scored higher on self-objectification there was a small negative association with appearance satisfaction the more time they spent video chatting,” she said.

It was a small association, but with potentially big consequences for some populations. One reason is because it’s not only friends, families and co-workers who people have been connecting with via video chat. During the pandemic, many people have also turned to telehealth solutions for medical care.

“Future research should consider whether the use of such platforms may be problematic for some individuals,” Pfund wrote in the paper. Particularly, she said, this preliminary research raises questions about the use of video chatting for treatment for people with certain conditions, such as eating disorders.

And she’s not assuming video chatting use could possibly affect only women. Up next, Pfund plans to look at men’s video chat behaviors: Are the associations the same as with women? Are men comparing their video chat appearances at all?

In the future, she plans to dive deeper into women’s perspectives by having them keep daily records of their video interactions and feelings.

“Then we could tease apart, on days when a person spends more time video chatting, is their appearance satisfaction better or worse,” Pfund said. “Or what about when they spend time chatting with family versus friends versus work?”

Even the same study might look different if she did it again today.

When she started the research, it was May. At the time, it may have seemed like forever, but by now we can say that back then, the video chatting phenomenon was still pretty new—just two months into working from home. Now people are used to it and likely have adjusted to staring at ourselves, sometimes for hours a day.

“It has been almost 10 months of us doing this all the time,” Pfund said. “What it means to us now might be very different than what it meant to us then.”

Other findings: The good, the bad and the blurred

Women who were more prone to comparing themselves to other people while video chatting reported lower face and body satisfaction and more frequent use of Zoom’s “touch up my appearance” feature to blur their complexions.