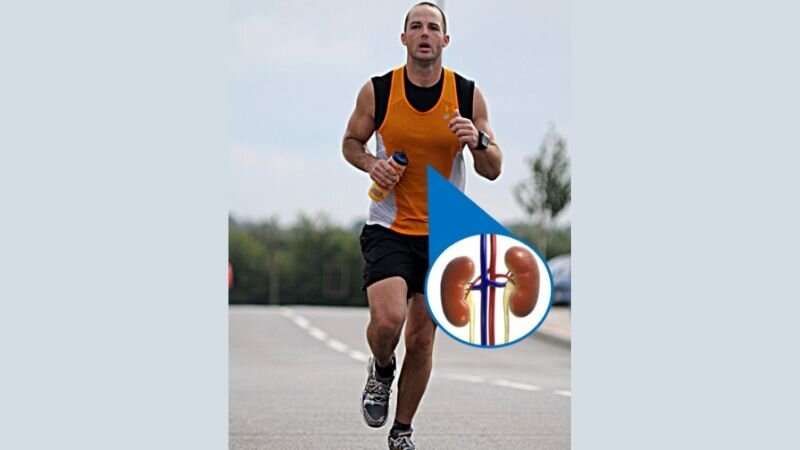 Legend states that after the Greek army defeated the invading Persian forces near the city of Marathon in 490 B.C.E., the courier Pheidippides ran to Athens to report the victory and then immediately dropped dead. The story—and the distance Pheidippides covered—inspired the modern marathon, a grueling 26.2-mile contest that attracts some 1.3 million runners annually to compete in the more than 800 races held worldwide.

While Pheidippides’ demise was more likely brought about by a 300-mile run he reportedly made just prior to his “marathon,” today’s long-distance runners face a mostly short-term but still serious physical threat known as acute kidney injury, or AKI. Now, results of a new study of marathon runners led by researchers at Johns Hopkins Medicine and Yale University suggest that sweat (fluid) volume and sweat sodium losses, rather than a rise in core body temperature, are the key contributors to post-race AKI.

“We knew from a previous study that a large number of marathoners developed short-term AKI following a race, so we wanted more specifically to pin down the causes,” says Chirag Parikh, Ph.D., director of the Division of Nephrology at the Johns Hopkins University School of Medicine and senior author of the new paper. “Our findings suggest that managing fluid volume and salt losses with a personalized regimen during the time period surrounding a marathon may help reduce the number or lessen the severity of AKI incidences afterward.”

The researchers say they also found that runners with AKI following a marathon had increased levels of a blood serum protein known as copeptin. If the connection is confirmed with future studies, they say, copeptin could be valuable as a biomarker during training for predicting post-marathon susceptibility to AKI.

AKI, as described by the National Kidney Foundation, is a “sudden episode of kidney failure or kidney damage that happens within a few hours or a few days.” It causes waste products to build up in the blood, making it hard for kidneys to maintain the correct balance of fluids in the body. Symptoms of AKI differ depending on the cause and may include: too little urine leaving the body; swelling in legs, ankles and around the eyes; fatigue; shortness of breath; confusion; nausea; chest pain; and in severe cases, seizures or coma. The disorder is most commonly seen in hospitalized patients whose kidneys are affected by medical and surgical stress and complications.

Similarly, a marathon subjects a runner to sustained physical stress, reduced blood flow to the kidneys and significant increases in the metabolic rate. Together, these events severely challenge the body’s ability to keep fluid volume, electrolytes and temperature levels—along with the regulatory responses to changes in all three—in balance. The result, as seen in 82% of the runners evaluated by the same researchers in a 2017 Yale University study, was AKI that averaged two days in duration.

For the latest study, the goal was to better define the risk factors and mechanism for the problem by examining 23 runners, ages 22-63, who competed in the 2017 Hartford Marathon in Connecticut.

Participants were volunteers recruited through local running clubs and the marathon’s registration process. Divided nearly equally between men and women, they were all experienced runners with a body mass index ranging between 18.5-24.9, and had completed at least four races longer than 20 kilometers (12.4 miles) within the previous three years.

Urine and blood samples were collected from the participants at three time points: 24 hours prior to the marathon, within 30 minutes of completing the race and 24 hours after. The researchers evaluated the samples for sodium levels; key biomolecules such as creatine phosphokinase, hemoglobin, urine protein and copeptin; and biomarkers associated with kidney injury such as interleukin-18 and kidney injury molecule-1.

Sweat collection patches were placed on the runners prior to the marathon and recovered at the 5-mile mark (because they became too saturated further in the race). Blood pressure, heart rate and weight were measured at all three time points, while a bioharness worn during the marathon continually recorded body temperature.

Twelve of the 23 runners (55%) developed AKI after the race, while 17 (74%) tested positive for markers indicating some injury to the renal tubules, the tiny portals in the kidneys where blood is filtered.

In the runners with post-race AKI, the researchers observed distinct sodium and fluid volume losses. The median salt loss was 2.3 grams, with some losing as much as 7 grams.

Core body temperature, while significantly elevated throughout a marathon, was basically the same for all runners and therefore, was not considered a causal factor for AKI. However, the researchers say that the combination of high-body temperature along with fluid and salt losses may add to the development of kidney injury.

“Putting the sodium and fluid volume loss numbers into perspective, the median salt loss for the AKI runners was about 1 1/4 teaspoons, or the entire daily amount recommended by the American Heart Association,” Parikh says. “Their median fluid volume loss was equivalent to sweating out slightly more than a 2-liter soda bottle. Beyond that, we had evidence that runners weren’t adequately keeping up with those depletions.”

In turn, Parikh says, that failure to balance the sodium and fluid losses during a marathon may account for the new study’s other relevant finding: the higher levels of copeptin seen in runners with post-race AKI.

Copeptin is a precursor to the release of vasopressin, a hormone secreted by the pituitary gland in response to reduced blood volume. It tells our kidneys and blood vessels to hold on to water, preventing a sudden drop in blood pressure and physical collapse.

“In the runners who developed AKI, we found copeptin levels as much as 20 times higher than those who did not,” Parikh says. “This is biological evidence that the AKI sufferers were severely volume down.”

Because vasopressin reduces blood flow to the kidneys, and decreases renal filtration and urine output, he adds, it also may induce inflammation and injury to the kidney tissues if secreted for an extended period of time. This may explain why a large number of marathon runners get AKI while those competing at shorter distances do not.

Parikh says future studies, using larger samples, will need to evaluate whether optimizing fluid and salt volumes in marathon runners lowers rates or reduces the severity of post-race AKI. Additionally, he says, the researchers would like to follow runners who participate in multiple marathons to look for any cumulative kidney damage.