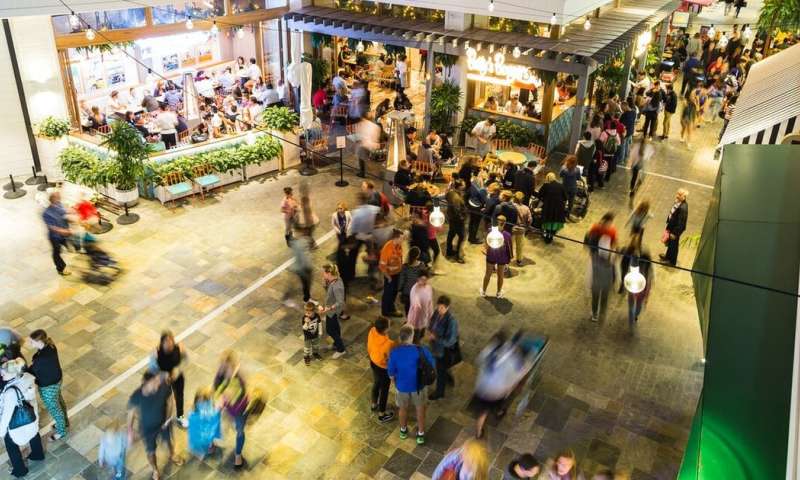 The virus that causes COVID-19 is much more likely to spread indoors rather than outdoors. Governments are right to encourage more outdoor dining and drinking, but it is important they also do everything they can to make indoor venues as safe as possible. Our recent monitoring of public buildings has shown many have poor ventilation.

Poor ventilation raises the risks of super-spreader events. The risk of catching COVID-19 indoors is 18.7 times higher than in the open air, according to the US Centers for Disease Control and Prevention.

If anyone had COVID-19 in these environments, particularly if people were in them for an extended period, as might happen at a restaurant or pub, there would be a risk of a super-spreader event. Less than 20% of individuals produce over 80% of infections.

Many aged-care deaths were connected

It appears a relatively small number of super-spreader events, probably associated with airborne transmission of SARS-CoV-2, the virus that causes COVID-19, were responsible for most of the deaths in Victorian aged-care facilities.

Aged-care operators and the states based their infection control on the advice of the Commonwealth Infection Control Expert Group (ICEG). As of September 6, the Coronavirus (COVID-19) Residential Aged Care Facilities Plan for Victoria stated: “Coronavirus (COVID-19) is transmitted via droplets, after exposure to contaminated surfaces or after close contact with an infected person (without using appropriate PPE). Airborne spread has not been reported [our emphasis] but could occur during certain aerosol-generating procedures (medical procedures which are not usually conducted in RACF). […] Respiratory hygiene and cough etiquette, hand hygiene and regular cleaning of surfaces are paramount to preventing transmission.”

In early August, more than 3,000 health workers had signed a letter of no confidence in ICEG. The letter noted that aerosol transmission was causing infections in medical staff, many of whom worked in aged-care facilities.

On September 7, we wrote to the federal aged care minister, Richard Colbeck, drawing attention to our August 20 article in The Conversation, which referenced a July 8 article in Nature. The Nature article identified an emerging consensus that aerosol transmission of SARS-CoV-2 is probable in low-ventilation environments.

The director of the Aged Care COVID-19 Measures Implementation Branch wrote back on Colbeck’s behalf on September 28 saying: “Current evidence suggests COVID-19 most commonly spreads from close contact with someone who is infectious. It can also spread from touching a surface that has recently been contaminated with the respiratory droplets (cough or sneeze) of an infected person and then touching your eyes, nose or mouth.”

In other words, Commonwealth authorities were still playing down the significance of airborne transmission nearly two months after the letter of no confidence was sent to ICEG and three months after the article in Nature. By the end of September, Victorian aged-care facilities had reported over 4,000 cases of COVID-19, about half of them in staff.

On October 23, ICEG was still saying: “There is little clinical or epidemiological evidence of significant transmission of SARS-CoV-2 (the virus that causes COVID-19) by aerosols”.

Focus on the ‘3 Vs’ to reduce risks

Measuring indoor ventilation is quick and easy using a carbon dioxide detector. Any CO₂ reading of over 800 parts per million is a cause for concern—the level for air outside is just over 400ppm.

There is no excuse for governments, health authorities and building owners not to monitor ventilation levels to help ensure members of the public are as safe as is reasonably practicable when indoors.

There is also no excuse for the Australian Building Control Board not to change the National Construction Code to require fall-back mechanical ventilation systems be fitted and CO₂ and humidity monitored in all buildings frequented by the public, particularly aged-care facilities.