The 34-year-old, from Indonesia, shoved an 80cm-long wire down his urethra which then got pushed too far and became stuck.

The man, who wasn’t identified, went to his local hospital’s emergency department complaining of stomach pains when urinating.

He then told doctors at Surbaya’s Dr Soetmo General-Academic Hospital about his decision to insert the wire.

Writing in the journal Radiology Case Reports, medics described it as being ‘lodged in the bladder’.

They gave him an X-ray to check how far into his body and how much damage it had caused. It was ‘visible and quickly identified’.

The wire, which was round 3mm wide, was coiled but — fortunately for him — had not attached to his bladder wall.

If it had lodged, urologists claim it could have caused a hole that needed surgery to repair.

Doctors pulled it out using forceps, although it’s unclear whether any of the wire was left hanging out to grip onto. 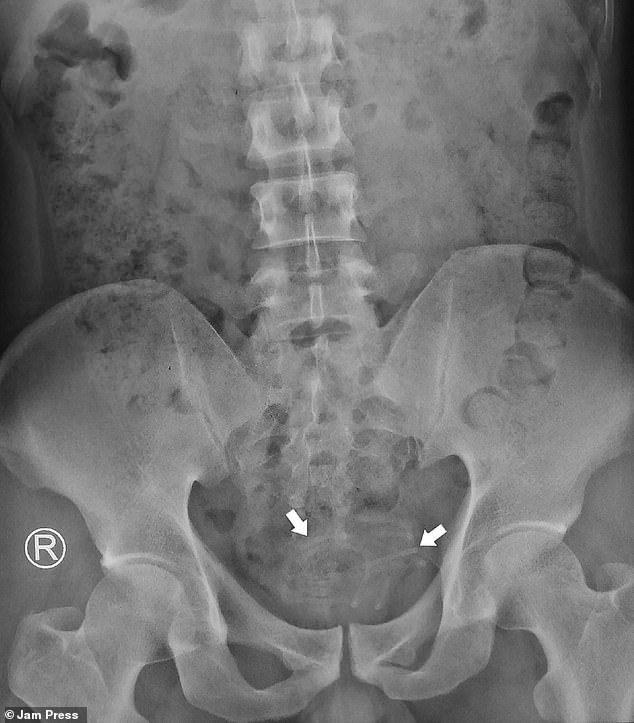 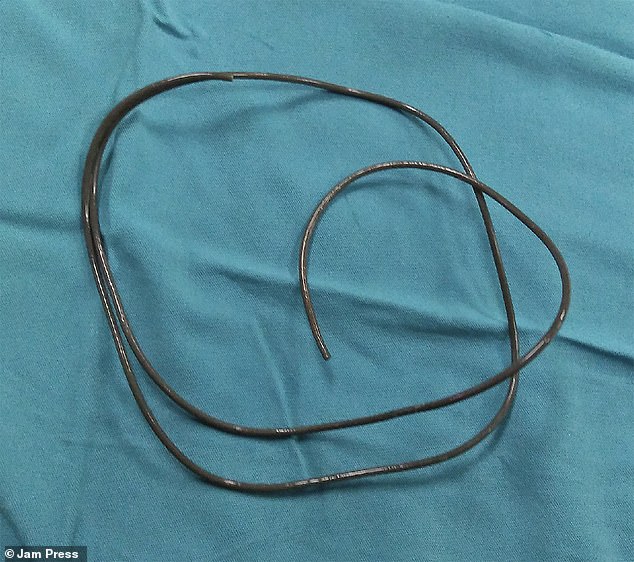 Sounding is when men insert items into the opening of the penis to enhance their sexual pleasure.

It usually involves specially designed tools made from glass or metal.

Doctors at clinic International Andrology London said there has been a ‘dramatic increase’ in the number of men having urethral problems due to sounding as men ‘look to expand their sexual activities and enhance their sexual experiences’.

Men interested in the practice should understand the risks and purchase equipment from reputable businesses and ensure they do it hygienically.

But they warned the practice can damage the sensitive tissue in the urethral pathway, which releases urine and sperm.

It can also lead to a lack of bladder control and infection.

And the penis and urethra may even require surgery or implants to rebuild sensitive tissue.

The man stayed in hospital overnight to see if he needed anymore treatment. He was discharged the next day.

Doctors described it as a classic case of polyembolokoilamania, the act of inserting foreign bodies into orifices such as the rectum and vagina.

They said the patient ‘showed no apparent psychotic behaviours and was mentally well’.

The insertion of objects into the opening of the penis for sexual pleasure is known as sounding, which carries a number of risks.

Dr Rich Viney, a a consultant urologist at the Queen Elizabeth Hospital in Birmingham, told MailOnline: ‘The instrumentation of the urethra goes back centuries and is called “sounding”, named after the hollow metal rods —called sounds — used to detect bladder stones by the sound they would make when hitting the stone.

‘After fishing some Bluetac out of a students bladder — he’d rolled it up to make an impromptu sound but it wasn’t a happy ending — I asked him why he did it.

‘He looked at me like I was an idiot and told me it massively enhanced his orgasm.’

He continued: ‘Mysteriously, we’ve seen a lot more of these kinds of problems during lockdown.

‘This is, of course, high risk behaviour, often resulting in infections, bleeding and stricture formation (a narrowing of the urethra restricting the flow of urine). Definitely not something we’d recommend.’

If an object gets stuck inside the penis it can cause several problems, ranging from a burning sensation, an inability to urinate and erection problems.

More serious complications, such as a hole appearing in the bladder, and scarring of the tube that carries urine out of the body can require major reconstructive surgery.

Giulio Garaffa, an andrologist at International Andrology London, told MailOnline: ‘Overall, I feel that this patient has been quite lucky not to have any consequences, as I would have not been surprised if he had caused trauma of the urethra while inserting such a long and pointy instrument.

‘I can see in the follow up of this patient from a urological point of view has been short and it is possible that he might have developed scarring at some level of the lower urinary tract at a later stage, as scarring and contracture can take time before they become obvious and the symptoms might appear at a later stage.’

He added: ‘These procedures can produce permanent damage to the urethra and this may require complex surgical procedures to be corrected.’

Writing in the journal, the doctors said: ‘Self-inserted urinary bladder foreign bodies for sexual gratification generate a significant challenge for physicians due to its difficult diagnosis and management.

‘Most patients were late to be admitted due to embarrassment — leading to serious short-term and long-term complications.’

Doctors at International Andrology London said there has been a ‘dramatic increase’ in the number of men having sounding issues over the past few years.