Autologous skin grafting is still the gold standard of wound repair. In a new report now published on Science Advances, Christiane Fuchs, and a research team in photomedicine and dermatology at the Massachusetts General Hospital and Harvard Medical School, Boston, U.S., discovered a new method to harvest full-thickness micro skin tissue columns (abbreviated MSTCs) with minimal donor site morbidity to apply to wounds randomly and accelerate re-epithelialization. However, the MSTCs could not restore normal dermal architecture due to its random placement. In this study, the team developed a magnetically induced assembly to produce constructs of densely packed and oriented MSTCs that closely resemble the overall architecture of full-thickness skin. The work tested the hypothesis that maintaining the orientation of the MSTCs could further hasten healing to restore a normal dermis. The proposed work led to faster and better constructed re-epithelialization, although it did not improve the retention of dermal architecture to reveal a hitherto unappreciated role for tissue morphology.

Biological tissue can be replaced by transplantation when it’s damaged beyond regeneration by disease or trauma. Harvesting tissue for grafting can create a donor site wound, where donor site morbidity and the limited availability of donor tissue are drawbacks for autologous grafting. The field of tissue engineering emerged to address these drawbacks, where researchers first engineered skin tissue for patient care with initial clinical reports from the early 1980s. A major limitation of engineering artificial skin is their inability to faithfully replicate natural skin—a complex tissue architecture with multiple functions and distinct microstructures. Instead of the typical process of ‘bottom up’ engineering, where tissues are constructed from single cells and biomaterials, Fuchs et al. recently developed a ‘top down’ approach using sub-millimeter scale samples of natural full-thickness skin tissue to form micro skin tissue columns (MSTCs). The approach provided a small enough sample for integration at the donor site for spontaneous healing without scarring or long-term comorbidities.

The team randomly sampled MSTCs from natural skin tissue to include diverse cellular and extracellular components in their natural organization structure and microenvironment. In this method, Fuchs et al. copied nature by using fragments of tissue as starting material. The process circumvented the need to replicate the microarchitecture of natural tissue to assemble MSTCs into constructs at the macro-scale. The scientists assembled and implanted the MSTCs in a way to maintain the natural epidermal-dermal orientation of skin with the epidermal heads up, dermal tails down, to observe healing in a porcine wound model. The potential design method could induce and maintain the MSTCs, and assemble them into 3D skin constructs resembling natural skin structure. They have the potential to be completed rapidly for clinical use, be customizable to fit wound dimensions and withstand mechanical perturbations. The scientists combined iron oxide particles with magnetic properties and a safety profile to develop a coating with a commercially available silicone-based wound adhesive and named it the MagneTEskin method. The easily scalable construct facilitated the assembly of large numbers of MSTCs onto accurately oriented skin constructs to resemble natural full thickness in skin in content and architecture. 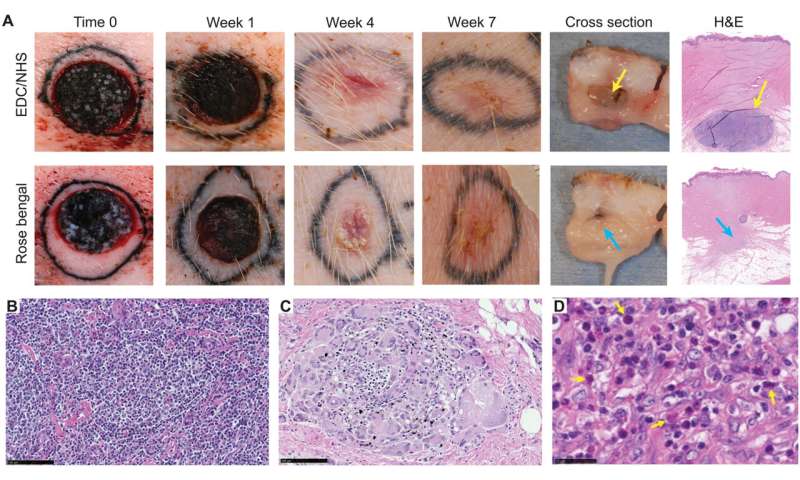 As a primary option, Fuchs et al. embedded and bound MSTCs in a biocompatible matrix using a biomaterial that initially existed in liquid form to allow the free movement of the MSTCs. The material had to be compatible with cell growth and solidify within a short timeframe. The team selected a few biomaterials as options, including bovine type I collagen, a thermo-reversible hydrogel and a mix of collagen and fibrin. The team comparatively observed the retention of MSTCs with MagneTEskin constructs and verified proper alignment using histology. They next placed the MSTC constructs into excision wounds of an animal model and further observed their mechanical properties. As a second option, they secured the aligned MSTCs by binding them only at the epidermal surface. This option was comparatively faster and simpler, while avoiding the introduction of exogenous materials into the wound.

The in vivo response of exogenous biomaterials

Using the various MSTC assembly options, Fuchs et al. next tested wound healing in a porcine full-thickness excision wound model. The team observed the wounds for eight weeks after implantation to understand the long-term effect on healing and tissue remodeling. The constructs containing MSTCs embedded in biomaterial matrices with collagen gels were slow to degrade, where the remaining material triggered foreign body reactions upon implantation. The results highlighted the sub-optimal nature of the biomaterials to produce MagneTEskin constructs. Fuchs et al. noted faster re-epithelialization with well-aligned MSTCs, by topically binding MagneTEskin constructs and evaluating them in the short term after 1-to-2 weeks of implantation. The team also noted successful maintenance of MSTC alignment in the biopsy samples, which they confirmed using histology. After a week, the epidermal heads of the MSTCs were located on the skin surface alongside accurate alignment of adipocytes and dermal tissue. In contrast, when they treated the wounds with random MSTCs, they noted chaotic organization with epidermal fragments and adipocytes haphazardly scattered throughout the wound bed. The MagneTEskin constructs therefore comparatively succeeded to re-epithelialize the wounds with well-formed fully stratified epidermal coverage. Although this strategy led to the retention of the normal dermal architecture within a week of implantation, it faded by two weeks and showed signs of a disrupted architecture by weeks four and eight. 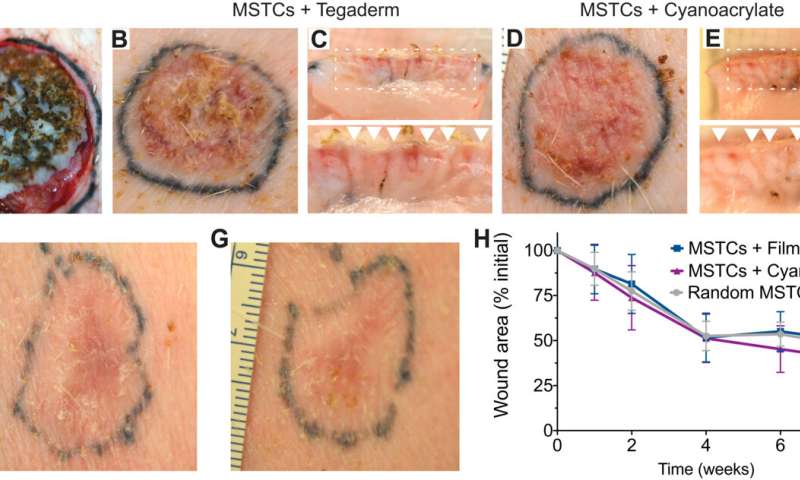