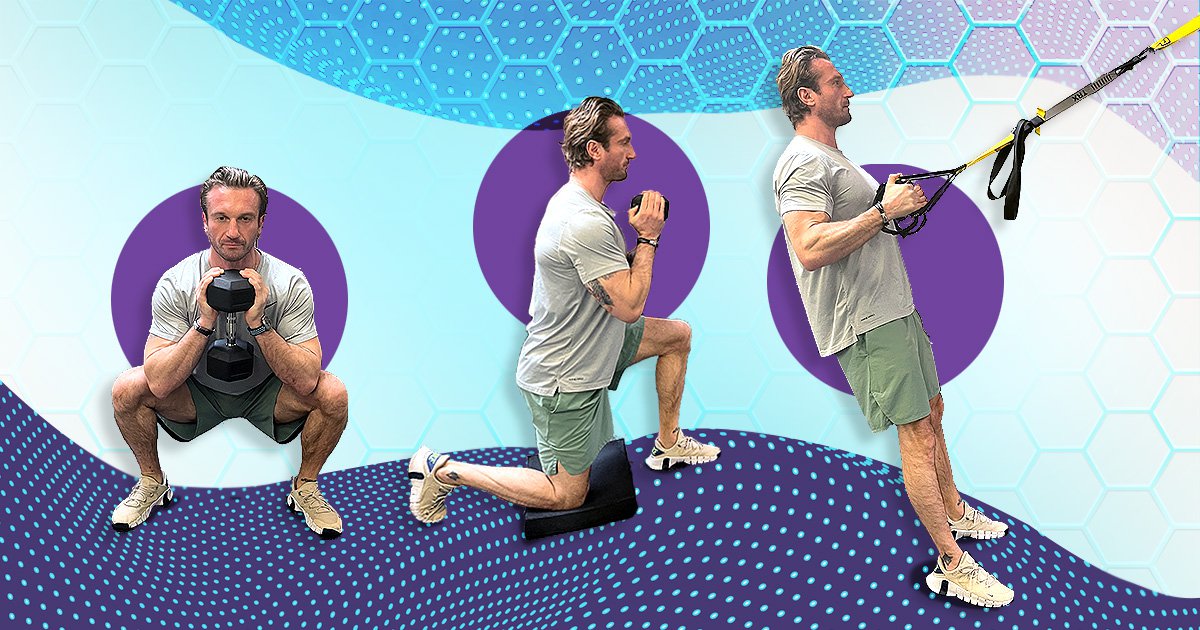 It’s not too late to start a New Year’s resolution – although as sports scientist and personal trainer Luke Worthington says, ‘fitness challenges and bootcamps are not sustainable’.

‘Six workouts a week might be attainable in January but after that people have lives and commitments, holidays and kids get in the way,’ he adds. ‘When you have a regime that doesn’t fit into your lifestyle, people tend to take an “all or nothing” approach. If they miss a workout or two, they feel like they’re not following the plan and they stop.’

So how do you work smarter instead of harder?

Sessions he has designed also invoke the vascular shunt mechanism, that is, working one area of the body hard, such as the lower limbs, so blood flow increases, then immediately switching to a different area in the next set, such as the chest and arms. This works the cardio system harder and increases calorie burn.

Want to give it a whirl? Luke offers up a mini superset workout to try based on the venous shunt phenomenon.

‘This should take 20 minutes and you should move directly from one exercise to the next, resting for 60 seconds after each completed circuit. After repeating the whole circuit three times, rest for 90 seconds and move on to the next circuit.’

How to: ‘Stand with feet shoulder width apart. Hold a weight in two hands just in front of the chest, initiate the squat by actively pulling your hips down towards the floor, think about keeping your knees apart and squatting between your heels rather than behind them.

‘This works the upper back and core and is great for posture. Perform ten reps.’

How to: ‘Grasp the TRX handles one in each hand, walk away from the pivot until the arms are straight and there is tension in the straps. Leaning backwards, walk your feet back towards the pivot until your body is at a 45-degree angle to the floor. Pull yourself towards the handles, aiming for your thumbs to brush against your bottom ribs. Be sure you keep the shoulder blades pulled down, and brace the abdominals.

How to: ‘Take a half kneeling position with 90 degree bends at both knees, the toes of the rear foot should be tucked under so the ball of the foot is grounded. Press into the floor equally with both feet until you come up into a split stance. The body should move directly upwards in a straight line and you should try to keep your hips facing straight ahead.’

’For the upper back and back of the shoulder, perform ten reps. It will also help reverse rounded shoulders.’

How to: ‘Attach a resistance band to a rack or fixed object at roughly eye level. Grasp the free end of the band with both hands approximately shoulder with apart. Pull the band straight towards you keeping it at eye level. You should aim to keep the elbows higher than the shoulders, and attempt to pull the thumbs behind the ears.’

‘An effective exercise to work the hamstrings (backs of the thighs) and gluteals (buttocks). Perform eight reps.’

How to: ‘Lay on your back on the floor, hooking the heels onto a bench, step or box. You should aim to have a 90 degree bend at the hips and the knees. Lift your hips towards the ceiling by pulling your heels down through the box. Use your abdominals to maintain a straight line with your body as you lift up.’

How to: ‘Lay on your back on a bench. Grasp the bench with two hands just behind your head, your hips should be as close to the end of the bench as you can manage. Squeeze a foam roller or rolled up towel in the back of your knees to engage the hamstrings. Pull your knees towards the elbows, using the lower abdominals, slowly lower your legs down until you make a straight line from your knee, though the hips, to the shoulders – ensuring that you keep squeezing the roller behind the knees.’