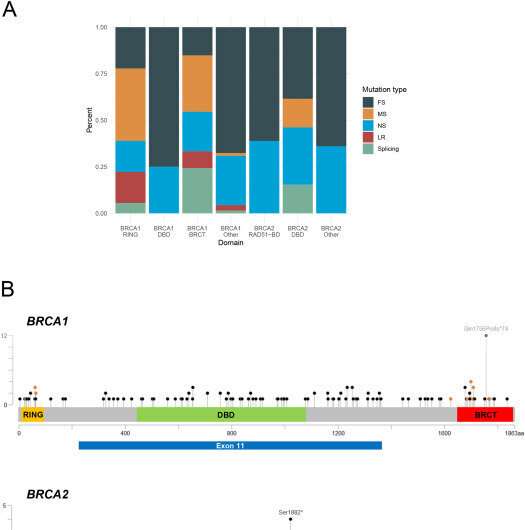 Mutations of BRCA1 and BRCA2 genes, which are inherited by 1 in 400 and 1 in 800 people respectively, significantly increase the risk of certain cancers such as ovarian, breast, pancreatic and prostate cancer.

In 2016, a new class of drugs, the PARP inhibitors, was found to be highly effective against BRCA mutation-related tumors. However, almost half of women with ovarian cancer experience a recurrence of the disease within five years.

An international team led by the University of Geneva (UNIGE), the Geneva University Hospitals (HUG), the Center Léon Bérard in Lyon, the Curie Institute, the French collaborative group ARCAGY- GINECO and the European consortium ENGOT, examined the genetic data of 233 patients enrolled in the pre-marketing phase III clinical trial of olaparib, a PARP inhibitor added to bevacizumab, a drug already used to treat ovarian cancer.

The researchers found that the success of PARP inhibitors depends on the precise location of the mutation on the gene. These results, that can be read in the journal Annals of Oncology, demonstrate that a very high precision medicine is possible in oncology.

The BRCA1 and BRCA2 genes code for proteins involved in the repair of DNA double-strand breaks, a particularly severe form of DNA damage, and thus play an essential role in maintaining the genomic stability of cells. When they are mutated, cells are less able to repair damaged DNA, a phenomenon that promotes the development of cancers.

“The resulting cancers are particularly aggressive,” notes Dr. Intidhar Labidi-Galy, a researcher in the Department of Medicine and the Translational Research Center in Onco-Hematology at the UNIGE Faculty of Medicine, and a staff physician in the Department of Oncology at the Geneva University Hospitals, and a corresponding author of the study. “Ovarian cancer, which often has a very poor prognosis, is one of the most common cancers in women who carry a mutation in one of these two genes.”

The recent introduction of PARP proteins inhibitors—including olaparib—is a major therapeutic advance. For the first time, a treatment with a significant overall survival gain was proposed. “But although previous studies showed PARP inhibitors to be highly effective in BRCA1 and BRCA2 associated cancers, almost half of the patients had their cancer recur. Why did this happen? That’s what we wanted to decipher here,” she adds.

The research team conducted a detailed analysis of BRCA1 and BRCA2 mutations in 233 patients enrolled in the phase III PAOLA-1 clinical trial, a pre-marketing study of olaparib administered in combination with the anti-angiogenic drug bevacizumab, already used to treat ovarian cancer. The patients suffered from advanced ovarian cancer and all carried a mutation in BRCA1 gene (159 patients) or BRCA2 gene (74 patients).

“We decided to increase the precision of our analyses by detailing the mutations involved, and especially what differentiated those sensitive to the drug from those that were less so,” explains Isabelle Ray-Coquard, a professor of oncology at the Center Léon Bérard affiliated to the National Federation of Centers for the Fight Against Cancer (CLCC)—the Unicancer network, and Claude Bernard University in Lyon, who supervised this work. “And the difference comes from the localization of the mutation on the gene: if the mutation is located in the DNA-binding domain, the drug is actually much more effective.” DNA-binding domains are protein motifs that are capable of binding to the DNA, and are involved in the regulation of gene expression.

“PARP inhibitors aim to create an accumulation of DNA breaks in mutated cells, leading to their rapid death before they can create malignant tumors,” explains Dr. Manuel Rodrigues, a practicing hospital physician at the Institut Curie and co-first author of the article. “It would seem that mutations in a DNA-binding domain accelerate this process and significantly increase the effectiveness of the drug. It is less the case when the mutation concerns other functional parts of the gene.”

These results highlight the need for a very high-precision medicine in oncology. “It is undeniable that this class of drugs is extremely effective in a large proportion of patients—some even seem completely cured, whereas a few years ago they would have been doomed, and 90% of people with a mutation in a DNA-binding domain of the BRCA1 gene have not relapsed when the analysis was conducted. But it is important to understand the precise mechanism of action of the drugs and to refine the treatments according to the genetic profile of the patients and of their tumors. Here, the location of the mutation is the key point,” says Isabelle Ray-Coquard.

This international academic study is the first of its kind and is part of a precision oncology approach, in which decoding the genome of patients and tumors is essential. The latter allows better targeting of diseased cells by developing specific inhibitors, which will also help limit side effects.