Swapping out red and processed meat for a diet rich in lentils, porridge and nuts could add up to 13 YEARS to your life, study suggests

Switching to a healthier diet could add more than a decade to your life, research suggests.

The research in Norway looked at the typical Western diet which the average British person is likely to eat every day.

It contains hardly any nuts or legumes, too few fruits and vegetables, half a litre of sugary drinks and 50 per cent too much dairy.

A 20-year-old Brit or American who keeps to the researchers’ optimum diet could live an extra 13 years compared someone who does not, the study calculated.

But even making dietary changes later in life could still significantly increase your lifespan, even in your 80s.

Legumes, whole grains and nuts lower cholesterol and are packed with vitamins and minerals.

A plethora of studies have linked diet to life expectancy, mainly through obesity, with the condition linked to cardiovascular disease, diabetes, and various cancers.

About a quarter of adults in the UK, and nearly half of those in the US are classified as obese. 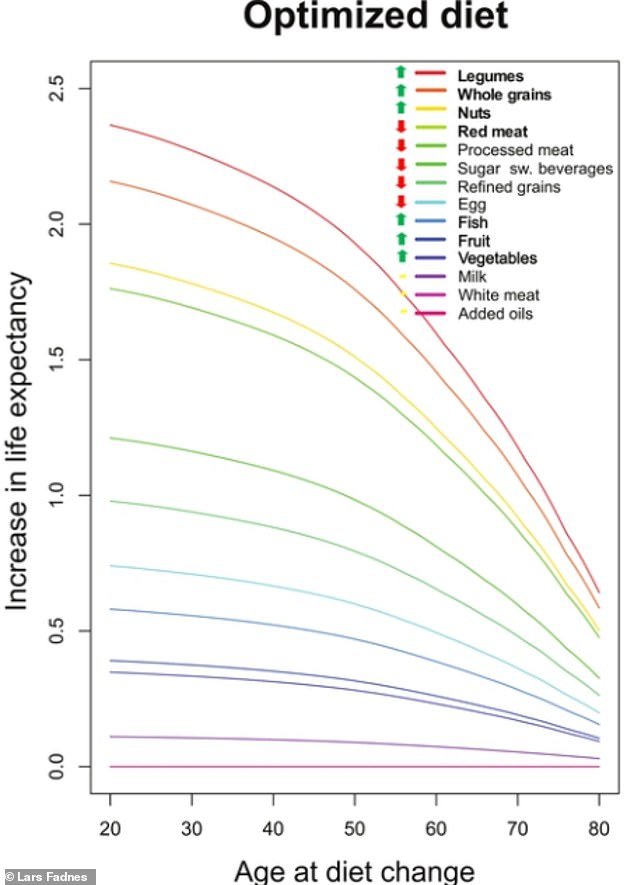 This graph shows the impact of increasing or decreasing the amount of certain food groups in your diet on your life expectancy. The biggest increases were seen from eating more legumes, like lentils, whole grain products and nuts as well as reducing the amount of red and processed meats consumed. The earlier people started making these changes the greater the impact on their lifespan but the authors highlighted that substantial improvements could still be made if people started eating healthier in their 60s and 80s 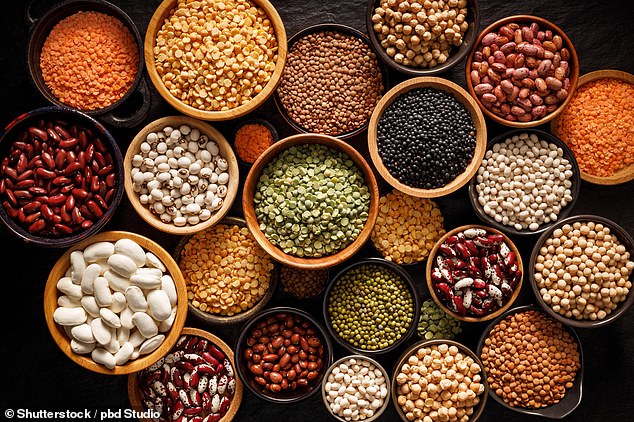 A diet high in legumes, a family of vegetables that chickpeas, lentils and beans, that contain a lot of proteins, fibre, vitamins and minerals but very little fat was linked to over two years higher life expectancy

University of Bergen researchers said a 60-year-old could still boost their lifespan by about eight-and-a-half years by following their optimal diet.

For 80-year-olds, dietary changes could boost their expected lifespan by three-and-a-half-years.

The study, published in the journal PLOS Medicine, broke down how many more years people could live by eating more or less of each food group.

The University of Bergen diet calculator advises people to eat per day:

They did this by comparing the typical European and American diet with what they described as the optimal diet for health and running them through a computer simulation that looked at health risks by age and food consumption.

The largest singular increase was from eating more legumes such lentils a family of vegetables that includes chickpeas, lentils and beans.

If a 20-year-old boosted their intake from the typical 0g of legumes per day to 200g per day – the equivalent of one large bowl of lentil soup – they could expect to live nearly two-and-half-years longer, the researchers said.

Legumes are naturally low in fat but high in fibre, protein, vitamins, and minerals.

Other big life expectancy boosts came from consuming 225g of whole grain products per day, such as porridge and brown rice, as well as a daily 25g serving of nuts. Each of these were linked to two extra years of life.

In terms of what to avoid, the researchers said completely cutting both red and processed meats, which are typically higher in fat and salt, from your diet could add about four years to your life in total.

Interestingly, all dietary changes had a greater effect on men’s estimated life expectancy than women’s though the researchers did not theorise why this was the case.

‘The Food4HealthyLife calculator could be a useful tool for clinicians, policy makers, and lay-people to understand the health impact of dietary choices.’

The researchers added that there are substantial uncertainties around their life expectancy estimates and that a multitude of factors determine total life span, such as potential treatment options for diseases.

They also said while their calculations used data from a large number of studies the overall quality of the evidence was moderate. They singled out the evidence about whole grains on life expectancy as very high and the impacts of eggs and white meat as very low.

The researchers collated data from multiple metanalyses on diet and life expectancy to create their calculator.

They said that previous research has suggested dietary risk factors from what people eat are estimated to lead to 11million deaths per year.

Meals should be based on potatoes, bread, rice, pasta or other starchy carbohydrates, ideally wholegrain, according to the NHS