Walk into any doctor’s waiting room and you’ll spot at least one Shunned Waiting Room Leper. This is the person who nobody wants to sit near because they have some kind of festering purple rash, or they’re emitting a weird ammonia smell, or they’re wearing a pom-pom beanie that is actually a regular beanie with a malformed head-polyp poking out of a hole on top. And yesterday … I was the Shunned Waiting Room Leper. I had a horrible cough, a disgusting cough, it was growly and guttural, with an unpleasant lingering after-gurgle. 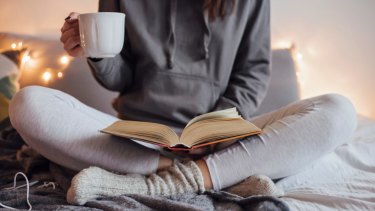 At first I wondered if it was one of those new flexible tablets, then I realised … it was a book.Credit:iStock

The benefit of being the Shunned Waiting Room Leper is you get a lot of room to yourself. I had three rows to lounge around in, while everyone else was smooshed into a single row on the other side of the waiting room, all covering their faces so they didn’t breathe in my contagions – some used their hands, others used their jacket-sleeves, one woman had yanked her turtleneck-sweater all the way up to her eyeballs.

So because waiting rooms usually involve a lot of “waiting”, I just hung out in my vast lepery space. I stretched my legs, tried different seats, played an amusing game where I leant forward like I was about to cough and made everyone on the other side of the room lean back in terror – if I did it in a rhythm, it was almost choreographic. And I also got into a bit of people-watching: I noticed that every single person was on their smartphone: old people, young people, turtlenecked people. All probably doing the usual pre-doctor smartphone routine: googling their symptoms so they could give the doctor a definitive list of every cancer they had. A roomful of locked-eyed head-tilted Smartphone-Starers. It was kind of sad but I guess that’s just the world we live in now. And also they didn’t really have a choice: the magazine table was over on my side and nobody was brave enough to risk deadly cough contamination for a 2013 Royal Auto with 50 pages of stairlift ads.

Actually there was one person in the waiting room who wasn’t staring at a smartphone. A little girl, maybe 10 years old. She was staring at an iPad-shaped device on her lap – I couldn’t see clearly because she was on the other side of the room, hidden behind her mother, who was selflessly using her own body as an improvised cough-pathogen-barrier. But the device seemed to be square and thick and bendy, and at first I wondered if it was one of those new flexible tablets that you can fold up and wear as a hat. It also had flappy bits on the edge, a strip running down the middle, creases on the corners – and then I realised that this little girl was reading … a book. An actual book made of paper. And she was immersed in this book, she was grinning with pleasure, she didn’t even look up when I coughed so loudly the receptionist ducked down behind her desk.

It was an amazing sight, this Little Book Girl sitting in the middle of all these Adult Smartphone-Starers – it was so reassuring, it gave me so much hope for the future, I instinctively reached for my own phone to take a photo of the whole scene. Then I stopped myself. Little Book Girl had taught me a lesson. Put your frickin phone away Danny, and read something. Anything. Even if it’s about the reliability, safety and style of a quality custom-built stairlift.

Danny Katz is a Melbourne humorist