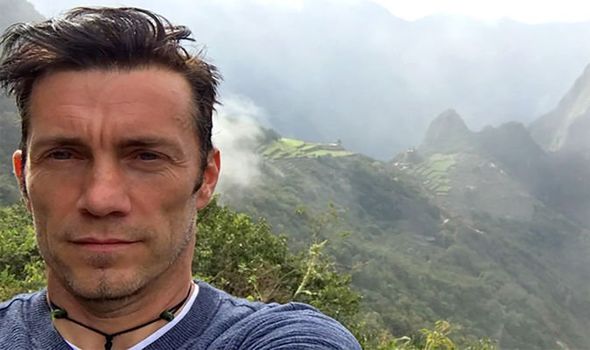 He said: “When Mike was diagnosed with MND in 2012 we couldn’t believe it. We were told there was no medical help and no potential research on the horizon that could help him in any way.

“We felt alone, abandoned and ignored.” The film-maker, 51, from North Wales, added: “At the beginning I was convinced and determined I could somehow cure my brother and as time passed I never lost that conviction.

“As he slowly lost his mobility and I knelt in front of him every day for hours massaging his legs, somehow, I felt by doing that, it would help his power return and he could walk again.

“When he could no longer feed himself and I would carefully spoon the soup I made into his mouth, somehow I felt it would give him the strength back to be able to lift his arms.

“When I would adjust his breathing-assist mask 20 to 30 times a day, maybe, just maybe, I thought it would be enough to give him the strength to talk again.

“But as we, the people who have seen the battle first-hand and have done all we can to fight know, there comes a day when all we can do in our power is not enough.” Royd is backing a Sunday Express campaign calling for £50million of Government funding over five years for an MND Research Institute to co-ordinate research to find a cure for the rapidly progressing disease.

He said: “This is a vital drive because the Sunday Express can help save others from the helplessness and heartache our family has experienced.”

Royd recently made global headlines by completing 49 out of 50 challenges on a bucket list left for him by his late brother.

Mike, who died aged 39, knew Royd’s devotion to him would mean his death would be a devastating blow from which it would be hard to recover.

He compiled a bucket list of 50 adventures for Royd to complete and give his life meaning after his death.

Laura, Mike’s partner, who for years jointly cared for him alongside Royd, was the custodian of the list, only revealing each new challenge to Royd after he had completed the last.

“When Mike died my world evaporated,” said Royd. “The bucket list was a genius idea because it helped me pay tribute to him, rebuild my life, but most importantly raise awareness of this horrendous disease.”

Amazon snapped up the international book rights and There’s A Hole In My Bucket: A Journey Of Two Brothers has become a global bestseller since its publication last month.

A feature-length film of the bucket list journey, narrated by actor Benedict Cumberbatch, will be out later this year.

Lord Of The Rings film director Peter Jackson and one of the stars of the fantasy trilogy Sir Ian McKellen, who played Gandalf, have played a part in Royd completing his bucket list.

“I have been humbled at the response from people across the world,” said Royd.

“The general public has been incredible and stars who carry huge influence have also shown staggering generosity.” Peter, the director of the blockbuster Tolkien movies, sent Sir Ian’s costume from the movie for me to wear on one of the bucket list tasks – I had to dress up as Gandalf on an Air New Zealand flight and welcome a plane load of guests.

“Having the real costume and beard made that really extra special.”

Other challenges saw Royd bungee jumping in a tutu and performing a stand-up comedy routine in a club having been given just 20 minutes’ notice.

But the opening challenge was perhaps the most poignant.

Aware of the painful funeral that lay ahead, Mike started the bucket list with a challenge designed to lighten the mood and distract his brother from the trauma of that day.

Amid a full congregation of grieving mourners, Royd was instructed to trip as he approached the microphone to give his eulogy, and then hold a piece of paper up revealing it was part of Mike’s challenge.

“My fake stumble actually turned into a real one,” Royd said.

“I banged my head really hard and it made me laugh – which is exactly what he wanted.

“Even in his dying days he was always thinking of how to alleviate the pain of others.”

The final task on the list proved too painful for Royd to complete, so the odyssey has a final chapter yet to close. “Sprinkling Mike’s ashes atop Machu Picchu, in Peru, was the final task,” revealed Royd.

“I got to the top and spent hours up there talking to him and preparing for that big closing moment.

“It was the realisation that it would bring this incredible adventure to an end, it would mean saying goodbye to Mike and the tribute, I just couldn’t do it. I needed our family and friends there to be part of it.”

Royd is planning to return to Peru soon with a large group.

He says he can vividly remember the moment Mike was diagnosed with MND, which is why raising awareness and funding to find effective treatments and a cure is so important to him.

“The prognosis is simply an inevitable, horrific end. We held each other and cried. I can feel that moment as if it was now.

“I want the Sunday Express campaign to help stop other families having to experience that brutal, helpless moment.”

Royd added: “Awareness is key. Families and victims have suffered in silence for years, a long death sentence is cruel and desperate.

“We have a movie of the adventure set for release that will get good global attention and keep the spotlight burning.

“And I love the idea of the bucket list concept being expanded nationally. We are working on that.

“Compassion is everything. I call on the Government to show theirs – to help us stop others having to face the pain that my ­family has endured.”

‘We must bring experts together and beat this’

A national research institute is needed to bring together world-leading experts and accelerate their efforts to find a cure for motor neurone disease.

Prof Ammar Al-Chalabi believes it will take a coordinated push to take research to the next level but said UK neurologists are in touching distance of breakthroughs to make MND a condition patients can live with.

He said: “It is not an incurable, hopeless condition, it is something that should be treatable.”

The Sunday Express is campaigning with leading charities – including the MND Association – for £50million of Government funding over five years to set up a research institute. This investment would attract match funding from pharmaceutical firms and other sources.

Prof Al-Chalabi, director of the MND Care and Research Centre at King’s College London, said: “The UK has world-leading experts in MND but although we try and work together it is not in a nationally coordinated way. For example, I might work with colleagues in Sheffield and in Edinburgh on one project, and colleagues in Oxford and University College London on another.”

The leading consultant neurologist has prepared figures for the different tasks – called work packages – needed to find a cure for MND, totalling about £50million over five years.

The first of these is clinical data collection, where every person with MND in the UK is registered and blood taken so they can be offered other types of research.

Prof Al-Chalabi explained: “The important thing is to know who has got it, and then we can get their clinical information and characterise what they are like.

“MND is not one condition, it’s lots of conditions, so if you can find ways of grouping people together based on certain features, that might mean you can target treatment more accurately.”

He added: “The second work package is analysing the data. So if you have blood from people you need to take out the DNA and sequence it, take other chemicals from the blood and measure them.

“All of these things require a huge amount of storage which is very expensive.” Storing each genetic profile would take up an entire hard drive, a terabyte of data, so on a large scale they must be stored on supercomputers.

The third work package will be using the stored biological information to look for possible drug targets and testing them – the most expensive part of the project.

Prof Al-Chalabi said: “The idea is that if you have found some people with MND have an alteration in some of the proteins in the body and how they work, then you might be able to make a drug that corrects that change.”

Libraries of skin cells are grown in labs, which are then treated with different drugs to see if any of them work.

After finding possible treatments that work on skin cells they have to be tested on fruit flies and zebra fish to gauge potential dosage and side effects in humans.

Prof Al-Chalabi said: “We want to avoid animal experiments but it is impossible to avoid them in coming up with new drugs for human use.”

The next step is to test the most promising previously undiscovered drugs on humans, at first in small groups of volunteers, before moving to trials of 40 to 100 people. The final stage of testing, a phase three trial, tests drugs on 200-300 people.

If a previously known drug, such as an anti-viral, is found to also work for MND it would not have to go through this clinical testing but still has to undergo expensive relicensing and repackaging.

In the past, when clinical trials have finished all the information from them has been discarded a few weeks later. So part of the project will be to make sure everything possible is learned and used to benefit future trials.

Other work packages include the management of the virtual research institute, which would coordinate the five separate research centres currently in the UK.

The next would be training and scholarships to find the next generation of doctors and MND specialists. Another work package would ensure everything learned from MND can be applied to diseases such as Alzheimer’s and Parkinson’s.

And the final one would see the research shared across the globe.