US medical schools attracted and enrolled a more diverse class in the 2021–2022 academic year than they did last year, according to new data released by the Association of American Medical Colleges (AAMC). Black, Hispanic, and women applicants and enrollees all made gains. 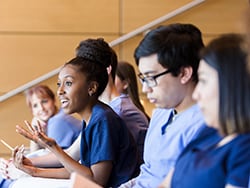 However, the number of first-year students who are American Indians or Alaska Natives declined 8.5%, to 226, making up just 1% of the new students.

“The gains in medical school enrollment of students from underrepresented groups are encouraging, but there is still much more work to be done — including increasing the representation of American Indian and Alaska Native communities — to ensure that our nation’s diversity is reflected in the future physician workforce,” said Geoffrey Young, PhD, AAMC senior director, transforming healthcare workforce, in a news release. “The AAMC and our member medical schools are deeply committed to significantly increasing the number of applicants and students from underrepresented groups.”

Women also continued to make gains this year, comprising 56% of applicants, 55.5% of first-year students, and 52.7% of total medical school students. This is the third consecutive year in which women made up the majority in these three categories. The number of male first-year students declined for the sixth year in a row.

The AAMC also provided data on how many people with different racial and ethnic identifications applied to medical schools.

From 2020–2021, the number of Blacks who applied to medical schools jumped 41.1%. Applications increased 25.1% from those of Hispanic, Latinx, or Spanish origin; 19.7% from Asian-Americans; 22.8% from American Indians and Alaska Natives; 19.6% from Native Hawaiians and other Pacific Islanders; and 13.9% from Whites.

In the American Medical Association’s strategic plan to reduce health inequities, which it announced last May, the AMA called for the elimination of all forms of discrimination, exclusion, and oppression in medical and physician education, training, hiring, and promotion. In addition, the report stated that the AMA is determined to “ensure equal representation of Black, Indigenous and Latino people in medical school admissions as well as medical school and hospital leadership ranks.”

Ken Terry is a healthcare journalist and author. His latest book is “Physician-Led Healthcare Reform: A New Approach to Medicare for All.”