Before she gave birth to her son Finn last year, the leader of the Scottish Conservative Party, Ruth Davidson, talked about her pregnancy. "This is about our family. This is not about my job," she said of her imminent motherhood. She seemed to believe that the two things could be separated. But this week, with her resignation as leader, it seems Davidson has had an awakening.

"I fear that having tried to be a good leader over the years, I have proved a poor daughter, sister, partner and friend," she wrote in her official missive to the Scottish party chairman. She didn't add "mother" to that list, but those of us who have similarly been forced to make "different choices" hear it anyway. 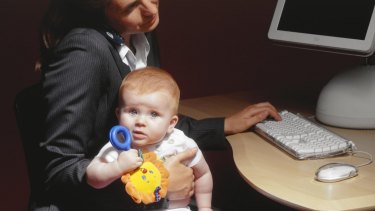 Flexibility in the workplace can benefit both employers and employees.Credit:Jennifer Soo

Davidson has now experienced, first hand, how hellishly complicated it is to do a highly pressured job and have children – and how untangling work and caring is often impossible, especially when the former suddenly gets more demanding.

There are complexities galore. The paralysing stress in the early days when, leaving the office with milk running down the inside of your shirt, someone begs for "just five minutes, it's important". The nursery charging you a pound a minute when you're late and telling you off, even as they rack up the charges.

The school day that finishes at 3.15pm, combined with plenty of curriculum days (teacher training when the school is closed), events and performances that your child begs you to attend – plus the holidays that are three times the length of your annual leave. All that is not to mention the perennial emotional torture of watching your angelic child snuffle in the lamplight before you run out of the house for another frantic 14 hours, dealing with people who are difficult and demanding, even for those who have had a good night's sleep.

Of course, it isn't just women who feel these pressures, but, at the moment, it is usually women who talk about them.

Of course, it isn't just women who feel these pressures, but, at the moment, it is usually women who talk about them. Why? Because women have traditionally taken the "second" job in a household, so have been left with responsibility for the children. But the world is changing. Women now have careers that are just as challenging as men's; younger dads now seek a more involved parenting role than their own fathers played. Davidson and her partner may both be female, but even in a heterosexual partnership, often neither parent wants to play the traditional "dad" role – they both want to simultaneously support their families and work.

Moreover, they often have to. Quite aside from the fact that women these days are just as likely to be educated and qualified as men, and want to pursue a fulfilling career, with houses at around six times the average pay packet, many families need two incomes simply to pay the rent or mortgage and the bills. Childcare costs often tip the balance, pushing women out of work and preventing them from becoming more senior; but for those who are in more senior positions, or hang on in there, they may find that the price they pay, in terms of always being available and contactable, is too much. This is exacerbated when they start to question the value of what they are doing and the people they work with.

If that sounds overdramatic, it's not. I've spent seven years interviewing more than 100 working parents to investigate the truth behind the glossy myth of the super-organised, successful career woman for my book. What I discovered was that, while these women may look like they have it all together on the surface, underneath, it's a mess – and it's one that's wreaking havoc on society and our families.

Like Davidson, I too left a career that defined my identity and gave me energy, status and income. I made that decision when the rewards of that job no longer matched what I gave up with my family to do it. I shudder when I look back on that period – of creeping from the house to go to work before it got light, trying not to disturb anyone, and arriving home late, grumpy, distracted and irritable, being where I had wanted to be all day, but without the energy to be any use. I was always connected to work: just have to do a quick call, approve a document, respond to someone who needs that thing urgently … I would put the conference call on silent while I bathed the kids and hoped no one would notice, while colleagues "joked" about how I was a part-timer and bosses showed inconsistent support. 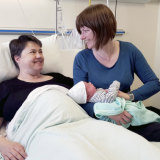 Scottish Conservatives leader Ruth Davidson and her partner Jen Wilson are seen in Edinburgh Royal Infirmary after Davidson gave birth to a baby boy in 2018. Credit:AP

When I finally quit, I saw it as my own failure. I wasn't tough enough and didn't try hard enough, I wasn't well enough organised. But when I started to interview other parents, I discovered the dirty little secret that Davidson now knows. That combining parenting and tough modern work roles, especially in leadership, is like mixing oil and water. You can sort of do it if you keep everything moving and never stop. As soon as you slow down, you see clearly that our working lives were designed for another era.

Now, plenty will snort at this suggestion. Twitter is full of people explaining to Ruth that this is what work is and always has been. If she's not up to it, she can go back to the kitchen. Many believe she has made this up: her baby is a convenient excuse for the changing political tide. That her dislike of Boris Johnson and personal conflict on the issue of Brexit mean she needs a diplomatic exit and this is it. She has been criticised for playing "the baby card". Let's be clear, I do agree that a difficult working environment is a contributing factor to her (and many others') decision. But those who have said that nothing has changed about how we work, and that everybody just has to face these choices, are wrong.

The working day has changed dramatically in the past 20 years. I found it striking to hear women in their 50s and 60s talk about the time before mobile phones, laptops and conference calls when, although work was still hard and leaving on time was difficult, they could at least be present at home when they got there.

These days, many jobs, especially in leadership, expect employees to be contactable at all times.

These days, many jobs, especially in leadership, expect employees to be contactable at all times. Enter the world of politics and the pressure is tripled, especially with a 24/7 news cycle that expects public figures to be always available and responsive to their audiences. That's demanding and draining for anyone, before you even consider the impact on the children. An accountant told me that her biggest problem is that after-school clubs only run until 6pm and this isn't nearly long enough for her to do her job properly. Her son is seven.

So what can be done about all of this? First, to thrive and keep engaged parents at senior levels, we need to work differently. We need politicians who viscerally understand the challenges. Then we need a raft of policies and initiatives that are designed for the world we live in now, not some Sixties version. Affordable childcare for all. Flexible work by design.

Paid parental leave that can be taken by both parents. An expectation that businesses support the whole workforce, not just the half without a uterus. Better management and better technology to increase our productivity by actually limiting hours of being bombarded but unproductive. The benefits of such changes have already been proven: the Organisation for Economic Co-operation and Development reports that in Nordic countries with such policies, GDP has gone up by between 10 and 20 per cent by liberating the talents of women like Davidson.

The fact that she now understands all this will, very likely, make her a better politician. She now has exactly the knowledge that carers and working parents across the country need our leaders to have: why working and caring in modern life is so hard. With, I hope, the realisation that it's time we tackle the big issues to end the Catch-22 when those who know get pushed out and those who don't know stay and change nothing.

Let's hope that, when the current political storms pass, she'll be back.

Christine Armstrong is the author of The Mother of all Jobs: How to Have Children and a Career and Stay Sane(ish)'