Chickenpox is a highly contagious disease that’s caused by the varicella-zoster virus. But you could be immunised against the infection by getting the chickenpox vaccine.

Chickenpox spreads very easily among the public that haven’t had the disease before.

It’s spread through close contact with someone that currently has chickenpox.

If you have chickenpox, you’re likely to be contagious one to two days after the development of the characteristic rash.

You should speak to a doctor if you’re not sure if you have chickenpox, said the NHS.

READ MORE: Chickenpox warning – the medication parents are being urged NOT to use 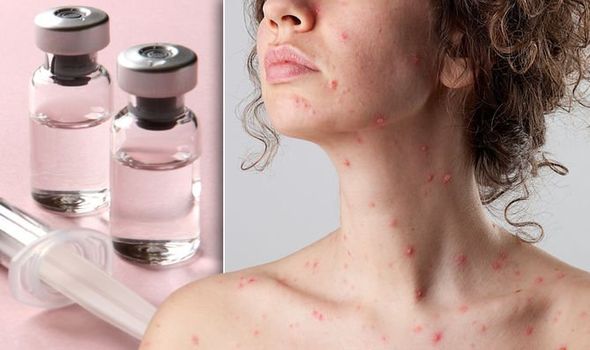 Is there a chickenpox vaccine?

There is currently a vaccine that helps to protect against the virus that causes chickenpox.

It’s not part of the standard childhood vaccination schedule, however.

In the UK, the chickenpox vaccine is only offered for free to the people that are most at risk of the infection.

Those at greater risk of serious complications from chickenpox include people with weakened immune systems and pregnant women.

People with weakened immune systems include those that have been diagnosed with HIV or cancer.

Chickenpox can be particularly serious for unborn babies when a pregnant women catches the infection.

It can lead to a range of serious birth defects, as well as very severe diseases in the baby when it is born.

The vaccine is also recommended for people that come into close contact with someone that has a weakened immune system. 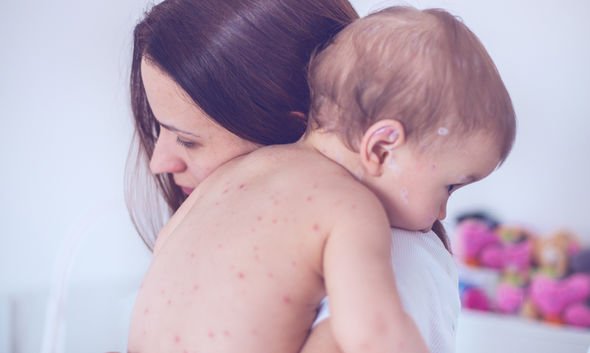 The chickenpox vaccine is a live vaccine, which means it contains a weakened virus – but only a small amount.

The virus encourages the immune system to produce antibodies that protect against chickenpox.

It’s usually given as a single dose, but some people choose to have a second dose to boost its effectiveness.

The vaccine is believed to be around 90 percent effective, meaning nine out of every 10 people never become infected with chickenpox.

Chickenpox causes itchy red spots all over the body, according to the NHS.

These spots may be filled with fluid, and they’re likely to eventually burst.

Some patients may also develop a high fever, aches and pain, and a loss of appetite.

Chickenpox can be very uncomfortable for children, but it’s generally considered to be worse in adulthood.