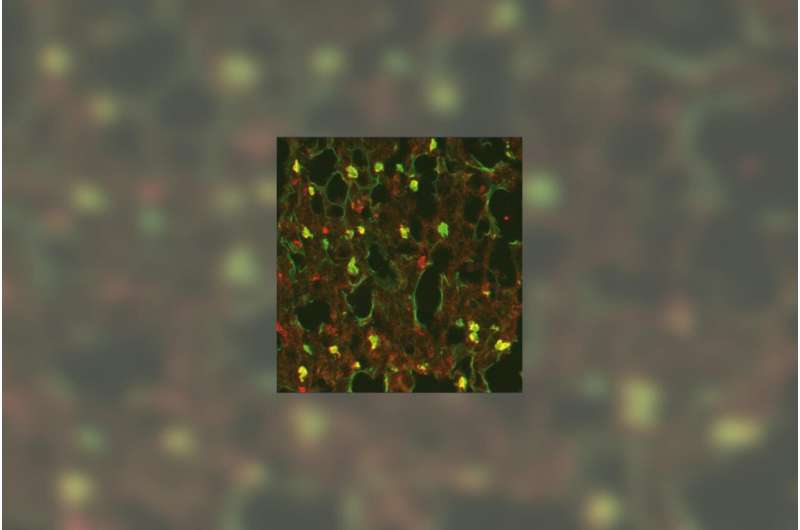 Chronic obstructive pulmonary disease—COPD for short—is one of the most common diseases of the lung. It affects almost 300 million people worldwide, of which about three million die every year. A collective term for chronic obstructive bronchitis and pulmonary emphysema, COPD develops primarily as a response to environmental toxins—particularly cigarette smoke—or due to genetic defects. LMU pharmacologist Prof. Christian Grimm from the Walther Straub Institute of Pharmacology and Toxicology has now been able to demonstrate, in collaboration with Prof. Martin Biel (Department of Pharmacy) and Dr. Ali Önder Yildirim (Helmholtz Zentrum München), that specific ion channels in immune cells play a decisive role in the inflammation process. According to the scientists, these ion channels could potentially be targets for new therapies.

Alveolar macrophages are immune cells that occur on the surface of pulmonary alveoli. They secrete various inflammatory mediators, including the so-called macrophage elastase MMP12. It was already known that an excess of this molecule contributes to the development of pulmonary emphysemas. As the scientists have now been able to show in two independent mouse models, the ion channel TRPML3 plays a major role in the regulation of MMP12: In the lung, the channel occurs almost exclusively in alveolar macrophages. When it was inactivated, the corresponding knockout mice had elevated MMP12 levels in the lung. Lung function tests confirmed consequential lung damage, which deteriorated following treatment with tobacco smoke or elastase, both of which contribute to the development of COPD.

Using various methods, the researchers subsequently investigated the expression and function of TRPML3 in the lung in order to clarify how the MMP12 concentration is regulated. “To our surprise, we found that it is not the secretion of MMP12 that is impaired in COPD, but the endocytosis. As such, it is not that the inflammation causes more MMP12 to be released, but that the reabsorption of excess MMP12 by TRPML3 does not work well enough,” says Grimm. “This is further supported by our demonstrating, with the aid of endolysosomal patch clamp technology, that the channel is expressed above all in the so-called early endosomes, whose job it is to absorb particles.”