The scales are weighted against us.

On one side, we have an awful lot of people who dislike their bodies, making them vulnerable to the marketing of the dodgy diet industry, which sits at the other side with its fat profits (approaching $279 billion). 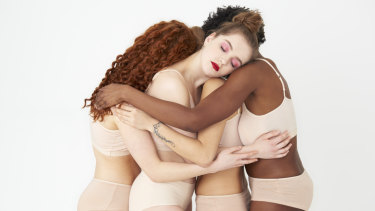 The weight loss industry won’t change, but we can.Credit:Getty Images

There have been some small attempts to redress the power imbalance. In September, Instagram and Facebook announced they would block posts promoting weight loss products and cosmetic surgery to under 18s.

It’s a good step, but it’s not good enough.

The restrictions were in response to growing concerns about the impact on teens' mental health and body image, but what about the rest of us? Many adults are also falling prey to the fallacy that if only we lose weight we will be happy/healthy/worthy.

I’m a 38-year-old woman and there is still a sad little voice in my head that says I’m only worthy of being looked at and loved if I’m a certain size. This arbitrary external goal historically led me to withhold food from myself or use it to punish my body. Not surprisingly, when I became sufficiently small, apart from a brief rush, the satisfaction and self-worth were not long-lasting.

"Non-diet dietitian" Fiona Sutherland calls this short-lived euphoria the “honeymoon effect”. When we only focus on weight loss and take any means to get there, be it through starvation, meal replacement shakes, appetite suppressants, diet supplements or “detox” cleanses, this feeling invariably doesn’t last. Nor does the weight loss, as studies repeatedly show.

“We know these things are not sustainable so how can we undertake ways of caring for ourselves and respecting where our bodies want to be most of the time without these drastic measures?" Sutherland asks, adding that the most vulnerable group to diet culture after teenagers are women post-baby and women during menopause.

Adams acknowledges that some people really do want to lose weight or have been told they need to for their health.

I’m a 38-year-old woman and there is still a sad little voice in my head that says I’m only worthy of being looked at and loved if I’m a certain size.

“That’s a really common argument: ‘We’re just giving people what they want.’ People also want to be taller, but we don’t stretch them,” she says. “We need to look at why people desperately want to lose weight and it’s because we’re getting all these weight loss messages, half the time from the weight loss industry, as if becoming smaller will magically improve our lives.”

Adams says the “primary trigger” for an eating disorder is engaging in trying to lose weight.

“It’s a one-way ticket to nowhere because the vast majority of people who lose weight put it back on again and then they just join the endless roundabout of trying to lose weight,” she says. “It’s a clever industry because it’s primed to fail and then make us buy a new one.”

Almost half of young Australian adults are now overweight or obese. There are health implications from this, but if health, not size, is really our concern (which is questionable given how terrified many are of fat people or becoming a fat person), we’d be trying to protect each other from the claws of the diet industry and, together, learning how to care for our bodies, without the objective of having to outwardly change them.

“There’s a growing pile of evidence that shows we can really improve our health by not focusing on weight or weight change [but] on taking better care of ourselves,” says Adams. “And that has nothing to do with weight loss lollipops or fasting milkshakes instead of food. Taking better care of ourselves is really quite basic – it’s feeding ourselves regularly, allowing ourselves to have a wide variety of food and not worrying about it too much.”

It has taken many years to free myself from the focus on weight and make the goal an internal feeling instead. The upside is no “honeymoon effect”, but rather a long-term healthy relationship with our bodies; by treating them with care, we adopt a healthier attitude towards them and they become physically healthier as a result, be that bigger or smaller or the same size.

The changes on Instagram and Facebook were largely the result activists standing up for young people and calling for their protection from diet culture and a weight loss industry that does not, would you believe, have our best interests at heart. The industry won't change, but we can.

What if we all stood up in this way for our own bodies and their right to be cared for and protected from the same junk too? Together perhaps we can tip the balance back and reclaim our health.