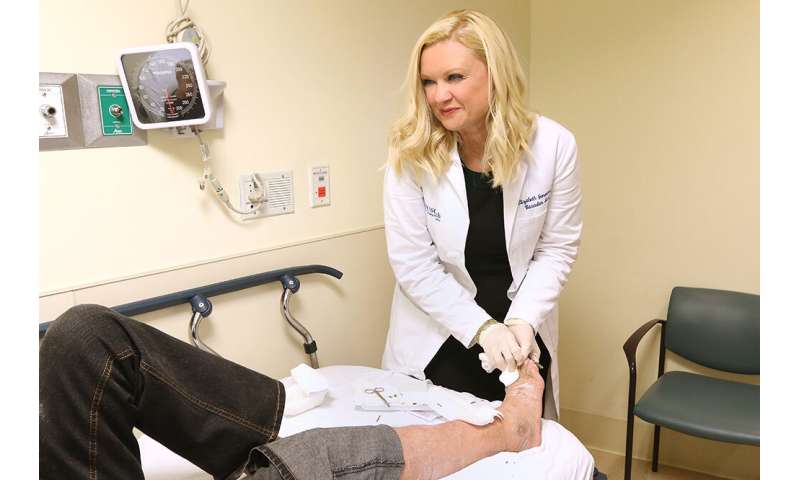 Forty percent of female doctors in a new study stopped working or moved to working part time within a few years of finishing their medical training. In contrast, all of the male doctors kept working full time. The findings were published online today in JAMA Network Open.

The researchers, including senior author and psychiatrist Constance Guille at the Medical University of South Carolina, say this is important for a few reasons. First, there’s a growing shortage of doctors in the U.S. Losing doctors early in their careers is making it worse. And losing female doctors may be particularly problematic, Guille said.

“We know that patients of female physicians have lower hospital readmission rates and lower mortality in comparison to patients of male physicians. Further, when we lose women in medicine, we lose the potential for them as leaders in health care. This is really important given that gender diversity in leadership is highly associated with better profits and decision making.”

Elena Frank, director of the Intern Health Study at the University of Michigan, was the lead author of the gender differences study released today. She and Guille wanted to know why there was such a clear difference when it came to male and female doctors’ schedules. So they asked what factors played a role in their decisions about working full or part-time. The researchers created word clouds based on their answers.

Frank said the difference was clear. “For men, the big words that jump out are financial—need money, loans. I don’t think you could even find the word child on the male one.”

The researchers said women and men should be free to choose how much they work or whether they stay home for family reasons. But it should be a genuine choice, not something forced on them by circumstances, Frank said. “It’s very common for people to see this and say some women are just choosing to put family first. Which is wonderful and a great choice for anyone who wants to make that. But in reality, what we’re seeing is that often there isn’t choice.” 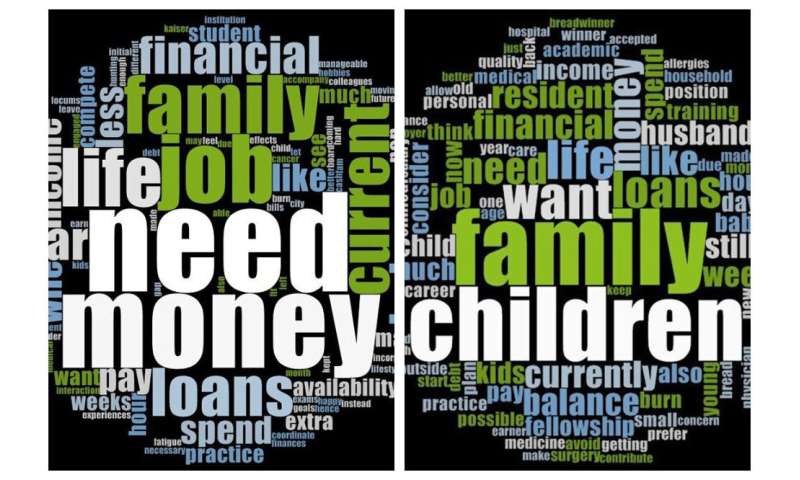 Guille said that if the differences weren’t so striking, they wouldn’t be speaking out so strongly. “But the major gap between these two groups is suggesting that we don’t have systems in place to support physicians as parents. That is a major conclusion from the study.”

Frank agreed. She said the U.S. as a whole lags behind much of the world when it comes to supporting work/family balance. “Medicine has a big opportunity and, really, an obligation to set an example for how to support women and families.”

Guille said hospitals and other places where doctors work need to create programs that support people who are juggling work with child care and other family responsibilities. “Having resources that can help you take care of your family while you’re taking care of your work, such as on-site day care, flexibility in work hours and paid maternity leave, would be helpful.”

Frank said it’s not just policies that need to be changed but also the culture. “Federal law guarantees 12 weeks of unpaid leave, but it doesn’t mean that people are able to actually take them. Similarly, men often have access to leave, but the institutional culture often pushes against them actually taking it. It’s part of the leadership’s role to actually set an example that makes it OK to use these policies once they’re actually in place.”

The research is an offshoot of the Intern Health Study, which is exploring the causes of stress and depression among young doctors. It’s based in the Sen Lab at the University of Michigan. The research team includes Srijan Sen, who leads the lab, and statistician Joan Zhao.

The study released today included 344 doctors. About half are women, half are men. They work in a range of specialties.

Frank said it’s important to see the gender difference in medical work hours as something that can stack the deck against women. “There is a reticence to identify this as a disparity, and this even came up in our review process for the journal article. Wanting to conceptualize this as a difference, and not a disparity. But it’s really important to label it as a disparity so we understand that this has to do with power and underlying structures and history.