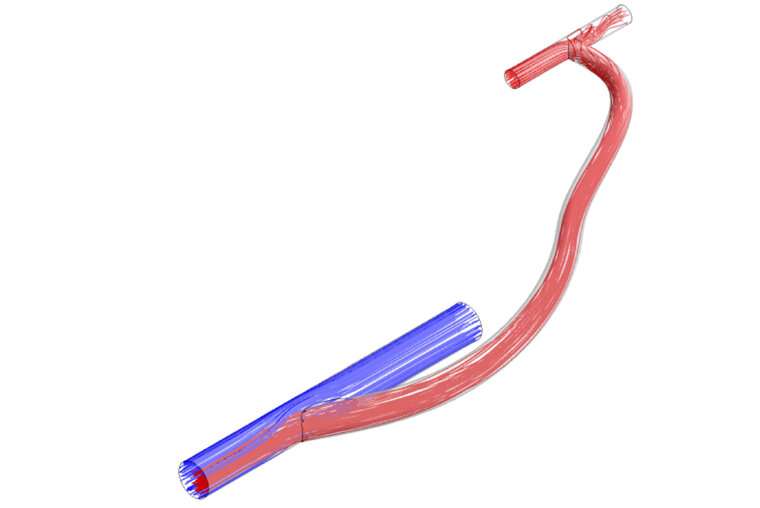 People with end-stage renal disease often undergo hemodialysis, a life-sustaining blood-filtering treatment. To make the process as fast and efficient as possible, many people have “hemodialysis grafts” surgically implanted. These grafts are like bypasses, connecting a vein to a major artery, making it easier to access blood and ensuring the same blood doesn’t get filtered twice.

But the grafts have a notorious problem: Clots tend to form where the graft is attached to the vein. For the person undergoing dialysis, this means not only a break from treatment, but also surgery to remove the graft and then surgery to implant another.

A multidisciplinary team from Washington University School of Medicine in St. Louis and the university’s McKelvey School of Engineering have devised a new way to design grafts that decreases the risk of clotting, ultimately relieving people of the pain, inconvenience and disruption of this critical treatment.

The research was published June 10 in the journal Scientific Reports.

In the United States, more than 500,000 people have end-stage renal disease.

“This has been a persistent problem for my patients, and we knew there had to be a better way,” said Mohamed Zayed, MD, Ph.D., associate professor of surgery and of radiology in the section of vascular surgery and senior author of the study. “There is only so much blood thinner a patient can tolerate to prevent graft clotting, so we turned from pharmaceutical solutions to mechanobiology.”

The field of mechanobiology considers all of the physical properties of a biological system, not simply the chemistry. How do the mechanical forces at play—for example, pressure, elasticity, tension—shape the formation of blood clots?

To figure it out, the researchers worked under the domain of the Center for Innovation in Neuroscience and Technology (CINT), a cross-disciplinary group working to remove classic barriers between engineering and medicine to allow a more fluid exchange of ideas and insights.

While a master’s student at McKelvey, lead author Dillon Williams, now a doctoral student at the University of Minnesota, wrote his thesis on the redesign of dialysis grafts. “Dillon’s key insight was that features of the surgery that the surgeon typically does not control can be tailored to reduce the chances that cells in the blood receive the mechanobiological cues that lead them to form clots,” said Guy Genin, the Faught Professor of Mechanical Engineering at Washington University and joint senior author on the paper.

The surgeon doesn’t have to simply build a bypass, but they can also act as a kind of civil engineer, paying attention to a specific design element in order to reduce the likelihood of a buildup of blood cells.

The team’s research revealed that the crucial design element was the angle at which the graft and the vein were connected. It could be tailored so as to reduce both high and low rates of shear strain in the blood, a force that warps blood vessel walls in a specific way.

“These can be nearly eliminated by judicious choice of the attachment angle,” Zayed said. “Although it is not always possible to reach the optimal range of attachment angles that Dillon discovered, the results tell us how to design prosthetic grafts that stand to reduce thrombosis [clot formation] substantially.”