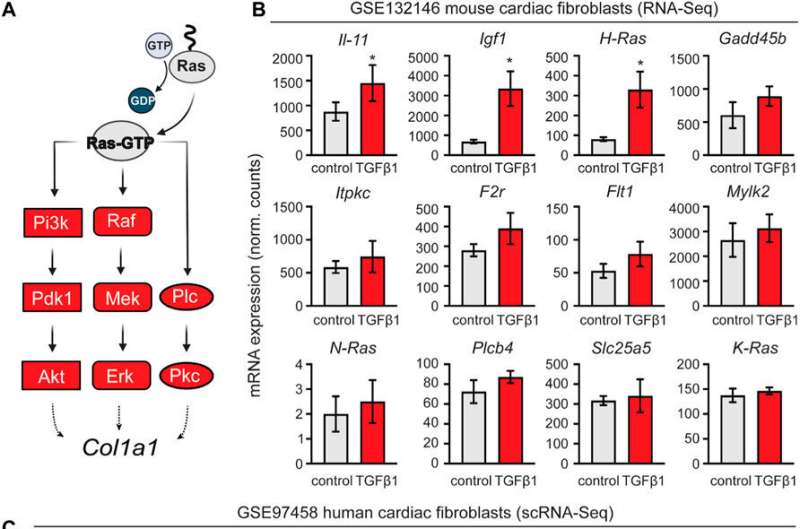 The Yoshinori Yoshida laboratory reports the generation of a platform of human heart organoids derived from iPS cells, which they use to test new therapeutic alternatives on cardiac fibrosis. Their study is published in Frontiers in Cell and Developmental Biology.

Patients undergoing a heart transplant must take immunosuppressants for the rest of their life. Otherwise, their body might recognize the new heart as foreign and attack it. Over the years, several drugs have been approved by the U.S. Food and Drug Administration (FDA) to diminish the immune system’s response to the transplantation of solid organs and let these patients live.

Among these approved drugs are Tacrolimus, a calcineurin inhibitor, and Sirolimus, an inhibitor of the mTOR signaling pathway. While these drugs can offer an exact effect on the immune cells, their impact on other cells is not entirely understood. Most of the studies on them have been performed in animal models and human clinical trials where the benefits of patient survival have been prioritized over long-term wellness.

The evolution of the generation of 3D models with human iPS cells that recreates organs’ functionalities helps to understand the long-term impact of drugs on different cell types. A new study by the Yoshinori Yoshida laboratory reports the use of iPS cells to produce mini human hearts in the laboratory and interrogate questions in the drug administration at a multicellular level.

The fibroblasts in the heart are a population that constitutes a significant portion of the cell composition of the heart. After a heart transplant or a cardiac injury, the cardiac fibroblasts are the main ones responsible for the reactivation following injury to produce fibrosis and scarring. At the same time, this response is not ideal and fails to recover heart function fully. Therefore, treatments avoiding solid organ transplantation are needed, and drugs that can ameliorate fibrosis are essential for proper organ compatibility. To date, experiments considering only fibroblasts have been used to discover new fibrosis treatments. Still, the crosstalk between cells is essential in defining the therapeutic response.

In general, the multicellular models of the human heart behave differently from that of over-reductionist models using only one type of cell.

“The multicellularity of the organoid models we can now create with human iPS cells to investigate cardiac functions and responses to drugs will play a fundamental role in requestioning many aspects of why we can observe many treatments failing at the level of clinical trials. Many promising compounds show undesired side effects. Now we can start answering many questions and finding new solutions to cardiac disease. It is a game changer,” said Yu Tian, the first author on the study.

To exploit this multicellularity, she and colleagues differentiated human iPS cells into human heart organoids and stimulated them to behave in the context of disease.

“It is a common practice to treat patients with a regimen of different drugs when dealing with multiple conditions simultaneously, yet we do not formally investigate the interactions between them. In addition, we do not have reliable cellular tools to investigate the effects of such treatments in physiologically relevant platforms before transitioning to clinical trials. 3D models recapitulating cardiac physiology is the new frontier. The possibilities that heart organoids differentiated from human iPS cells brought us to the laboratory, lead us to redefine some concepts that were assumed to be therapeutically safe to date,” said CiRA Associate Professor Yoshinori Yoshida, who led the study.

Using heart organoids reduces the labor and cost of the experiments for drug testing. Also, it results in reliable sources of information that can be transferred later as solid evidence when opening new clinical trials in humans.

The study shows a promising compound, an inhibitor of the protein p38, that can ameliorate cardiac fibrosis. p38 is a protein known to have multiple roles in the cell, but the study showed its usefulness for treating cardiac fibrosis when inhibited. Notably, while the inhibitor of p38 showed positive results in cardiac fibroblasts, the combined therapy with immunosuppressants in the heart organoids showed opposite results, which could reflect the importance of the different cardiac cells contributing and modulating the response to the drug.

Thus, evaluating the safest combinations of treatments in cardiac diseases in the lab with iPS cells differentiated into heart organoids is a feasible possibility that may help assess treatment responses at a preclinical level, allowing researchers to make better decisions for patients.

Assistant Professor Antonio Lucena-Cacace, a senior author of the study, added that the findings also give clues on the future directions that preclinical models for treating cardiac diseases should be moving toward.