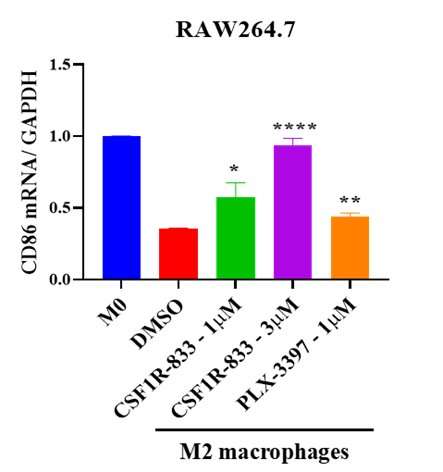 A potent and selective colony stimulating factor 1 receptor kinase inhibitor IHMT-CSF1R-833 was discovered by researchers led by Prof. Liu Qingsong from the Hefei Institutes of Physical Science (HFIPS) of the Chinese Academy of Sciences.

The study is published in the European Journal of Medicinal Chemistry.

Most current CSF1R inhibitors lack proper selectivity among other kinases, making it difficult to correlate their therapeutic efficacies with CSF1R inhibition. Therefore, it is highly desirable to identify the distinct chemical scaffolds CSF1R inhibitors for both preclinical mechanistic and clinical pathological studies.

IHMT-CSF1R-833 exhibited potent inhibitory activity against CSF1R with an IC50 (half maximal inhibitory concentration) value of 5.14 nM, suppressing the phosphorylation of CSF1R and its downstream signals pathway in a dose-dependent manner.