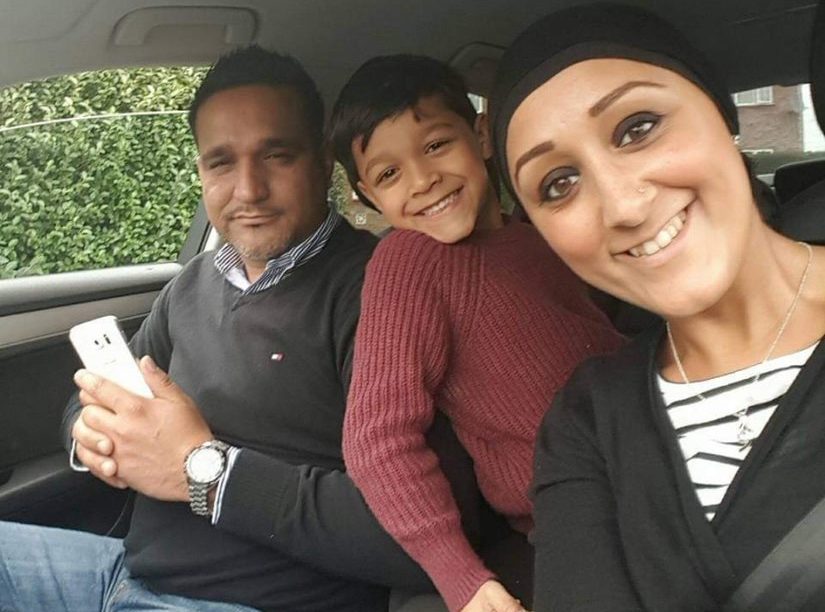 In January 2015, I had just finished a workout at home when I felt an itch in my right breast.

I scratched it and touched something hard that felt like a lump.

As I was checking to see what I could feel, I grabbed a dense, hard ball. There was nothing similar in my left breast and I knew that something wasn’t right.

I called the GP the next morning and she said she’d see me immediately. After examination by her, I was referred to a breast clinic. The GP reassured me that because of my health, family history and age (I was 30), it was most likely fine.

But I got a call to go in for a mammogram, a biopsy and some other tests just days later. Given the reassurance from my doctor, and research I had done, I genuinely wasn’t that worried.

A week later I was called back in for my results. I had slept like an absolute baby the night before. My husband later told me after that he hadn’t slept at all.

When the surgeon said the words, I had to ask him to repeat it. It didn’t sink in. He told me again and reassured me that they had a plan in place for treatment.

I’m a very practical person and went straight into this mode. I was just thinking, ‘OK, what do I need to do?’

It turns out, when you get diagnosed with breast cancer, you basically have to do a PhD overnight. All of the jargon, the terms, the options – it’s overwhelming. I’m not really sure that I took it all in.

I was essentially told that I’d have to write off the next year to go through treatment; that they would start aggressive chemo to shrink the tumour and that I’d lose all my hair after 10 days; that I’d have it every three weeks.

I was also told that for the first two weeks after chemo, I’d feel bad, then in the third week, I’d feel a bit better.  The surgeon said to me, ‘in those weeks, do everything you’ve wanted to do and haven’t done – enjoy them.’

Those words made me panic as it made it sound like there was a real possibility they might be my last weeks. I was 30 – with a four year old son and, at that point, everything was a blur.

My overriding thought was how I was going to tell my mum that her daughter might die. I just couldn’t get past that thought.

I was never given a prognosis as such – I was told by the surgeon that their aim was to cure.

After hearing the news, I called my sister and told her. I couldn’t stop crying and asking how I was going to tell mum, so my sister said she’d come with me and we’d tell my parents together.

My sister then told my other four siblings and so, within 45 minutes my whole family was at my mum’s house.

I’m South Asian and we are very community focused – and everything you do, you have to consider the wider impact on the family, friends and neighbours.

While it was lovely that they were there to support me, it almost felt like I had a death sentence – we were all in the same room, and they were hugging me one by one, all crying.

Although my family was so supportive, people in the South Asian community will only talk about certain things. And breast cancer in particular is very taboo.

I had a gap of about four weeks between telling my family and my chemo – they had to establish if it had grown to stage 4. Luckily, it had only gone into my lymph nodes but not anywhere else. It was stage 3.

The chemo was strong; it knocked me senseless. I lost my hair, I had to move in with my parents for them to look after me as I was so ill I couldn’t even hold a glass of water or go to the toilet myself.

Bits of my hair had started to come off on my pillow and the sofa when I got up. I avoided having a shower for days, as I was so scared. Then, on day 12, I went for a shower and within seconds of putting water on my head, all of my hair had fallen out, and was on the floor of the cubicle. I just remember screaming and screaming at the top of my lungs.

That moment was a clear point where I looked like a cancer patient and I had the realisation that I wasn’t in charge of what was happening.

I saw myself without hair that day, and that was the last time. Afterwards, I covered any mirrors in the house as I couldn’t bear to see myself. I wouldn’t let anyone see me without something on my head, even my husband. I really struggled with coming to terms with it.

In the South Asian community, everyone feels like they have to rally round – but not in a way that is always helpful. During my treatment, family friends who I don’t have a relationship with asked to come over, to offer their condolences.

But during this time, I was so hot with the chemo, so I was wearing shorts and vest tops. Because of my family’s faith, when people were coming round, I had to be covered up. I had to put a scarf on and sit there, looking appreciative.

That takes a lot of energy when you’re feeling so unwell.

I did it a couple of times then I said I can’t do this anymore. I don’t want to get dressed up and sit in front of them, even though I respected their intentions.

But I felt as though there was a lot of expectation about how I should be acting. At one point we were on the phone to other people in the community and I laughed. A family member – I won’t say who – said to me, ‘don’t laugh, you’re supposed to have cancer.’

It’s almost as though you have to show you’re unwell and be very visible to the community. Of course, there’s no right or wrong way to look or act if you’ve got cancer – but that’s how it felt.

There were several incidents that made no sense whatsoever.

When my dad was speaking on the phone one day, I overheard one of his friends saying that it was ‘my lack of faith’ that had got me where I am and that I needed prayers, not chemo.

My dad ended the call abruptly and told me that, of course I need to carry on with my treatment plan. His advice was that faith would give me the strength to carry on, and that the two could sit side by side.

My sister was told to tell me that I should wear a black bra, as that would make the cancer go away.

Someone else in the community told me that their mum had ovarian cancer and she didn’t get treatment, she just prayed and it went away.

I was also told that it was a sign from God that I should start wearing a headscarf permanently. I made it clear that I was wearing this to hide my baldness, not for religious reasons.

After the chemo, I was offered the choice between a mastectomy and lumpectomy, where they just remove the tumour and keep the rest of the breast. My initial reaction was to go for the mastectomy but I was unsure, so I asked for advice from my brother.

I told my friend that I had spoken to him and she was in disbelief that I had spoken to my brother about a ‘boob job.’ Let’s be clear, it’s not a boob job, this is breast cancer surgery. Still, she said she could never even mention her boobs in front of her brother in any context.

In the end, I decided to go for the lumpectomy.

It saddens me that as a community, we do look out for each other and mean well – but the elder generation are still holding stigmas around cancer, and particularly breast cancer. That thought process is being passed down through generations and you’ve still got younger people who are saying they’ve been told to wear nothing but a black bra to ward off cancer.

These communities stay within the communities, so they believe what they hear. And it stops women from getting the support they need, as there’s nowhere to go

This is why I decided to set up my support group, ‘Cancer Chaii & Chat’, to help South Asian women going through cancer to get the help and sisterhood they need.

My experience has made me realise that it’s so important to spread awareness about breast cancer and open up conversations within the community.

Being diagnosed with breast cancer at such a young age is difficult enough, but being from the South Asian community, where there is a real stigma and taboo about it, makes this journey harder.

After my lumpectomy, I got radiotherapy five days a week for a month, which made me ill – but also had lasting impact such as nerve damage, bone pain and a fractured ribcage. My treatment ended in October 2015.

I was officially discharged last year, after being given ovarian suppression injections for three years and then a hysterectomy in December 2020, which forced me into menopause at the age of 35.

Cancer and post cancer life is hard – and people don’t open up about it, or seek support when they need to. I hope to my story and work in the community can change this.

How should you check your breasts for lumps or irregularities?

Discussing the importance of being breast aware, Addie Mitchell, Clinical Nurse Specialist at Breast Cancer Now, wants women to know there is no right or wrong way to check your breasts.

‘It’s about looking and feeling regularly so any changes can be spotted quickly,’ she said. ‘The sooner breast cancer is diagnosed, the more effective treatment may be.

‘Whatever your age, being aware of all the signs and symptoms of breast cancer is crucial – it’s not just a lump to look out for. Other changes could be a nipple becoming inverted or a change in texture of the skin.

‘While most symptoms won’t mean breast cancer, if you notice anything unusual for you get it checked out by your GP.

‘Anyone with questions can call Breast Cancer Now’s nurses free on 0808 800 6000 or visit breastcancernow.org.uk.’