I’ve never gone to a nudist beach. I have no desire, generally speaking, to be naked outside my own home.

Like many people, I’ve spent about 30 years routinely sucking in my stomach in public. And having kids hasn’t exactly boosted my confidence in my body. Innocent queries about where my breasts have gone and how “squishy” my stomach is can have that effect. 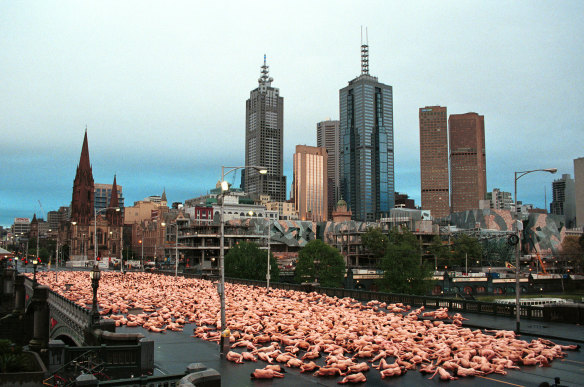 I’m in there somewhere, squishy bits and all, as part of Spencer Tunick’s nude installation on Princes Bridge in Melbourne in 2001.Credit:Spencer Tunick/Getty Images

And yet, I will be all but running to strip off and pose naked alongside thousands of strangers at Bondi Beach at 3am tomorrow. I know how exhilarating it will be because I’ve done it once before.

“I’m trying to create flesh architecture,” American photographer Spencer Tunick, who will be taking our picture, once said. This is his shtick. Tunick has taken en masse nude photos around the world. In Australia, he’s done it three times already, including one in which 5200 nude people laid like sardines on the steps of the Sydney Opera House. This time, Tunick is hoping to attract 2000 people to Spencer Tunick: Strip Off For Skin Cancer, in homage to the more than 2000 Australians who die every year due to skin cancer. (He’s doing it to raise awareness about skin cancer and the importance of sun safety.)

The last time I stripped off for Tunick was in 2001, on the Princes Bridge in Melbourne. I had flown there from Sydney expressly for this purpose. This will be a very different experience, I thought. I can write about it!

Still, in the days leading up to the event, I pictured myself crab-walking sideways on to the bridge, struggling to use my two hands to cover my three bits. Dear God, I thought. What if I stare at everyone else’s bits, and they catch me staring? 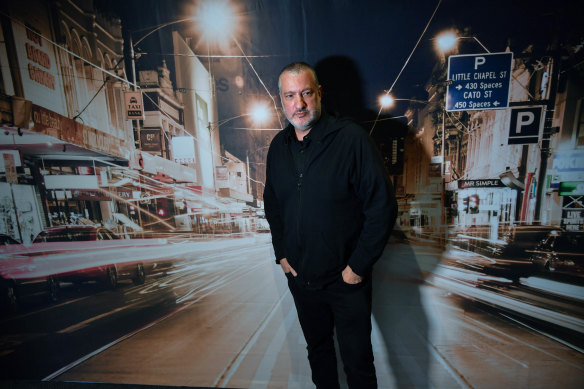 But a funny thing happened when I took off my clothes and handed them to my husband, who was standing on the sidelines. Within seconds of being instructed by Tunick (or was it his assistant?) via megaphone to lie down on the cold pavement alongside the more than 4000 other naked people, all of my nerves, a bit like my clothing, slipped away.

Walking to my spot, I saw to my right a woman with a taut and shiny belly as round as a basketball. She looked to be about nine-months pregnant. To my left was a grey-haired former army sergeant in his 50s, who said he was keen to try something new. There were men and women of every shape, size and colour. A toddler, or two. Once I was surrounded by naked people, and it became the new norm, I realised I wasn’t zero-ing in on anyone’s bits. My hands fell, relaxed, to my sides. Humanity was beautiful. I realised we were all the same. Doing our best to be happy, and survive the daily onslaught of little humiliations and challenges. Why the hell had I been sucking in my stomach all this time?

It’s been 21 years since then. I still suck in my stomach. My body hasn’t become any leaner or tighter. But this time, I’m drawn to strip off with strangers for different reasons. 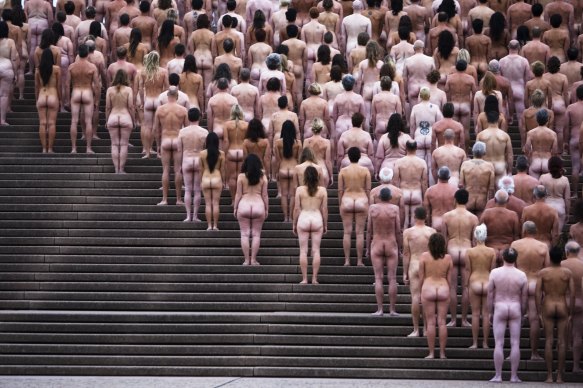 Art lovers on the steps of the Sydney Opera House for photographer Spencer Tunick in 2010.Credit:Peter Braig

My life is unrecognisable from what it was back then. Both my parents have died. I’ve had three children. My opportunities for seizing life by the balls, in between work deadlines and tending to the mania of child-rearing, have dwindled. Sure, I swim in the ocean, and that makes me feel remarkably present, something I struggle to do. In those moments, my concerns slip away, and with them, my petty judgments of others’ failings. And my own. But I’m far more aware of my own mortality now. I crave larger moments in which I can embrace this life while I’ve still got it.

So, come 3am tomorrow morning, I’ll be starkers at Bondi Beach, hopefully not bothering to suck my stomach in.

Samantha Selinger-Morris is a lifestyle writer for the Sydney Morning Herald and The Age.

The Opinion newsletter is a weekly wrap of views that will challenge, champion and inform your own. Sign up here.

Poor little rich kids: There aren’t swaths of research on the woes of rich kids. There is some evidence they’re at greater risk of battling depression, anxiety and substance abuse, so why aren’t we talking about them more?

Morning checklist: There are three questions Jessica Irvine asks herself every morning, and if she can answer “no” to all three, it’s sure to be a good day.

Life’s golden rule: Being back in her old family home after a divorce and raising kids there was “beautiful agony” for Kate Halfpenny. That’s why she now never looks back.