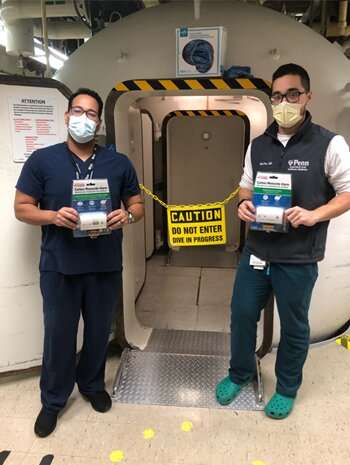 Last winter, the Penn Hyperbaric Medicine team noticed that they were uncommonly busy. That wouldn’t have been remarkable for most providers, since COVID-19 presented a significant challenge for health systems across the country. But hyperbaric medicine uses special chambers that manipulate pressure—reaching two or three times the pressure typically felt at sea level—to help restore oxygen to body tissues. Many know it for its use in treating underwater divers for decompression sickness, or “the bends.”

But for the land-based, hyperbaric medicine is an important treatment for forcing carbon monoxide gas out of the blood of the most severely poisoned patients. This treatment is especially important because it helps reduce potentially significant neurological conditions like seizures, or memory or motor function problems that present similarly to a concussion. Last winter, Penn’s Hyperbaric Medicine team was seeing abnormally high numbers of patients needing the treatment, which is typically only used for the worst cases.

“Typically, from 2016 through 2019, we averaged about 36 people in the hyperbaric chamber for carbon monoxide poisoning,” said Michael Tom, MD, a doctor in Emergency Medicine on the Hyperbaric Medicine treatment team at the Hospital of the University of Pennsylvania. “That number doubled in 2020, and we saw most during the winter of 2020–2021. Since we only treat a minority of carbon monoxide poisoning cases, the people with the highest levels of carbon monoxide in their system, we knew many more must have been coming into the emergency department with serious, but lower severities.”

The winter of 2020–21 does appear to have been an outlier. Cases have returned to their normal level, but they’re still high for a condition that is avoidable with the proper knowledge and equipment.

“For 30-plus years, our program has taken care of acutely poisoned patients and seen the unfortunate consequences of carbon monoxide-related injuries, nearly all of which are preventable,” said David Lambert, MD, chief of Hyperbaric and Undersea Medicine. “We want to increase awareness of the hidden dangers of carbon monoxide and how quickly it can strike, as it is odorless, colorless and tasteless.”

In typical years, roughly 50,000 Americans are poisoned by carbon monoxide and 400 die. Serious cases of carbon monoxide can result from smoke inhalation amid fires, but common sources of poisoning are faulty or leaking home heating systems. The gas is odorless and invisible, which makes it especially sinister. While everyone is exposed to miniscule levels of carbon monoxide every day through things like car exhaust, breathing in high levels of it causes red blood cells to carry the carbon monoxide instead of oxygen. Body tissues then become starved for the oxygen and die.

So why was there such a spike in cases last year? Penn’s team has some theories, which actually have to do with the COVID-19 pandemic, to an extent. 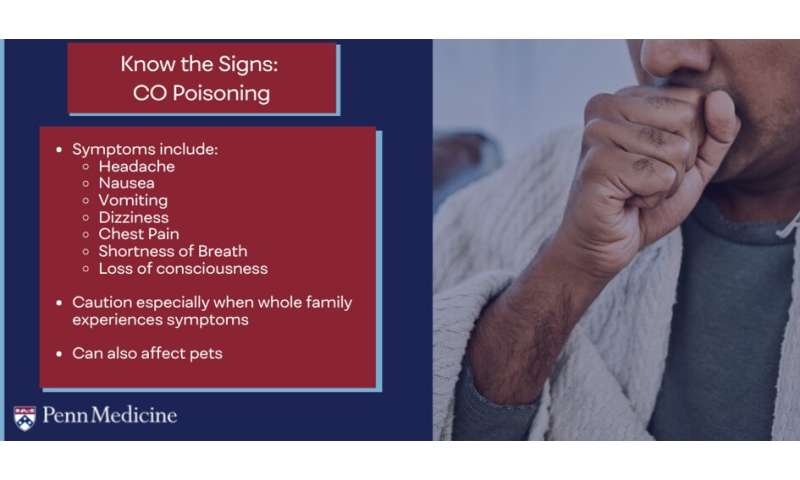 “The usual causes are an old or malfunctioning heating system leaking carbon monoxide into a home,” Tom said. “We’d need data on this, but everyone’s speculation is that people were home more because of the pandemic, and with so many people out of work or with limited financial resources, they were not getting maintenance for their systems. So more systems were in danger of leaking the gas into homes.”

This common connection to heating systems is why carbon monoxide poisoning is usually more prevalent in winter. Other sources of poisoning also include gas-powered generators, which must be run outdoors but some people take inside amid storms and power-outages—or if their normal heating system doesn’t work.

While carbon monoxide is largely unnoticeable by humans, simple detectors powered by wall outlets or batteries (or both), are key to picking up on its presence. That’s why distributing detectors to those who don’t have them is so important, and why the Penn Medicine team was so keen to do it. When they were able to secure 60 detectors, partly through a donation from the Jenkins Foundation, the Hyperbaric Medicine team decided to split them up. One group of 20 went to the People’s Emergency Center to be distributed to the families they work with who need transitional or permanent housing.

“In light of the recent tragedies in both Philadelphia and New York, we are going beyond our usual safety measures to ensure the families living in our housing have all of the tools necessary to ensure their safety,” said Kathy Desmond, executive director of the People’s Emergency Center. “These detectors are a critical piece of that.”

The remaining detectors will be handed out through the Hyperbaric Medicine team and in the emergency department at Penn to patients who come in with carbon monoxide poisoning but don’t have a detector in an effort to prevent future incidents.