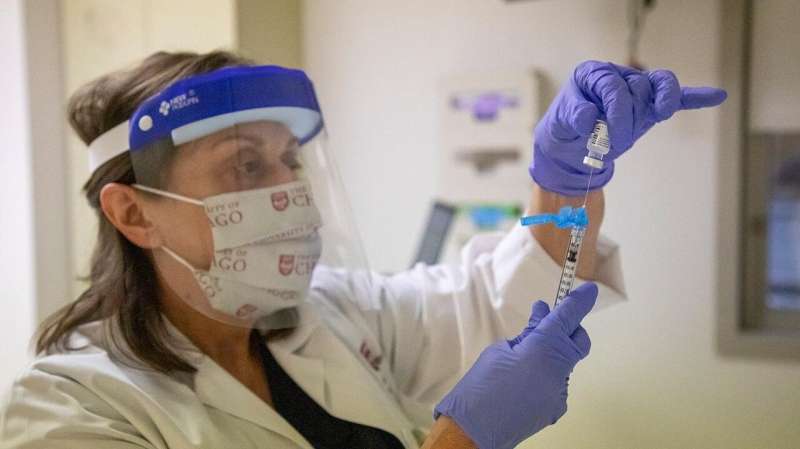 Vaccine development is typically measured in years, not months. But as the COVID-19 pandemic rages on, scientists are are racing the clock—and breaking records—to develop an immunization that provides protection against the virus.

The nation’s scientific community also faces another obstacle: convincing the public that the COVID-19 vaccine is safe, and how important it is to get a COVID-19 vaccination in the first place.

“Even the most effective vaccine can’t protect us or our loved ones if people are afraid to take it or will not take it,” said Kathleen Mullane, director of infectious disease clinical trials at University of Chicago Medicine. “We know things are moving faster than ever, but the nation’s scientific community has cooperated and collaborated in ways as never before and we are absolutely committed to making sure whatever is ultimately approved works and is safe. I am going to get vaccinated and am recommending vaccination for my family and friends because I believe in the safety and efficacy of these agents.”

The rapid progress on a COVID-19 vaccine means that data regarding the long-term safety and durability of these vaccines will still be flowing in long after a vaccine has been approved for emergency use. Nevertheless, those wondering about vaccine safety may be encouraged that despite the speed in which these vaccines have been developed, the important regulatory and evaluation checkpoints designed to protect patients were followed. These milestones help to determine how safe and effective a vaccine will be, and whether or not the benefits are worth any potential risks.

Before the COVID-19 pandemic, getting a new vaccine from concept to approval could take 10 years and billions of dollars. With only one in 10 vaccine candidates making it to market, vaccine development is a risky proposition for pharmaceutical manufacturers.

For those who are unfamiliar with the methodical process of clinical research, the process can feel torturously slow. First, researchers must study the structure and infectious behavior of a pathogen. Then they figure out how to get the human body to best produce an immune response to fight against it. Next, the vaccine is tested for safety and efficacy—first using cell, animal and mathematical models, and later in human clinical trials involving thousands of participants. Only then can the federal approval process begin.

Dozens of vaccines against the SARS-CoV-2 virus are being developed by global pharmaceutical companies, but so far only a handful have reached large-scale, phase 3 clinical trials. In phase 3 trials, tens of thousands of volunteers participate to test the safety and effectiveness of the immunization. So far, 11 phase 3 trials have launched globally, although more are expected in the coming months and years as other research efforts move through the pipeline.

They’re getting a boost from Operation Warp Speed, a collaboration between the pharmaceutical industry and the federal government. To offset the cost of the development of the COVID-19 vaccine and to help mobilize approved vaccines as quickly as possible to the American public, the government established nearly $10 billion in federal funds. This has greatly accelerated the timeline for the development of vaccines through clinical trials, FDA review and mass distribution of a vaccine.

All of these factors in turn mean that once a vaccine passed critical safety and efficacy milestones and received emergency use approval from the federal government, healthcare organizations were able to start providing the vaccine to patients in a matter of days. For example, the Pfizer/BioNTech mRNA vaccine was approved for emergency use by the FDA on December 10, 2020; healthcare workers were being vaccinated by December 14.

It should also be reassuring that nearly 200 years of vaccine development has generated a number of highly effective and safe vaccine platforms, requiring less time and effort to produce new kinds of vaccines. Recycling existing vaccine technology allows researchers to focus their time on identifying the best targets that will produce the strongest immune response with the fewest side effects.

“Really, most of the vaccine platform development work is already done,” said Habibul Ahsan, Director of the Institute for Population and Precision Health at the University of Chicago Medicine. “You just have to do the remaining part, which is adding the right viral antigens to the already-proven platform and making sure it’s safe and effective in humans. Even in just the last five to 10 years, we’ve made big leaps in developing new kinds of vaccine platforms like those being tested for SARS-CoV-2.”

Vaccines work by presenting the body’s immune system with certain proteins from the virus called antigens, that activate the immune response to generate antibodies that protect against the disease.

The vaccine candidates currently making headlines use mRNA and vector-based platforms. Vector-based vaccines have been developed in the past for diseases including SARS, MERS, and most notably, the deadly Ebola virus; and mRNA vaccines have previously been tested to prevent the Zika virus.

These next-generation immunizations have never been tried at such a large scale before, but there is already evidence that these platforms are safe and effective, with a reduced risk of the side effects generated by previous types of vaccines such as live attenuated or deactivated whole-virus vaccines.

“The mRNA and vector vaccines are a newer technology; the first products were developed in 1999,” said Mullane. “Based on our understanding of human biology, there is no reason to believe that they should pose any greater risk than any of the more traditional types of vaccines. If anything, the biggest concern is how long they are effective. The preliminary efficacy data so far is extremely promising.”

To accelerate development, many COVID-19 vaccine trials are conducted in studies that combine phases 1, 2 and/or 3 where researchers begin by vaccinating a smaller number of healthy volunteers. As the trial continues, if the vaccine appears to be safe, it then opens up to more participants, such as those with preexisting health conditions. Large-scale phase 3 efficacy trials ultimately include tens of thousands of volunteers. The current trial lineup includes a variety of vaccine types—both tried-and-true models as well as next-generation approaches.

Before any vaccine can receive federal approval, even for emergency use, investigators must wait until tens of thousands of volunteers receive their experimental vaccine. Then they wait for enough time to pass for some of those volunteers to be exposed to COVID-19, which tells how effective each vaccine is. Scientists are also studying whether those who received the vaccine—versus a placebo—had less severe forms of illness. Without data that conclusively show vaccines are both safe and effective, they aren’t approved for use in the general public.

Once a clinical trial collects enough data to show a vaccine is both safe and effective, the pharmaceutical company submits data to the FDA, where it is reviewed and reanalyzed by federal statisticians and an external advisory board of scientific and medical experts. Since most of the COVID-19 vaccines will be submitted to the FDA before any long-term data is captured, it’s likely a vaccine will receive an emergency use authorization rather than full approval. This was the case for the Pfizer/BioNTech mRNA vaccine, which was approved for emergency use by the FDA on December 10, 2020, and the Moderna mRNA vaccine, eight days later.

The speed at which these trials are progressing has raised questions about whether or not they are safe. Scientists are aware of lingering mistrust due to the politicization of the pandemic and historic medical disenfranchisement in certain communities; so they are being careful not to overstate the early results from ongoing clinical trials and to be transparent about the risks involved.

Many are making efforts to get out into the community to speak with potential volunteers, address their concerns and offer an opportunity to participate, particularly in the large-scale phase 3 trials. For example, at UChicago Medicine, clinicians are taking mobile medical units into the surrounding neighborhoods to take the vaccine right to people’s front doors.

“Many centers recruiting for these trials are not readily accessible by minority and low-income populations,” said Ahsan. “But UChicago Medicine has been working hard to build strong relationships with our local community and make sure they know that we’re here to serve them.”

What risks do vaccines pose?

Like most medical treatments, any vaccine is accompanied by some degree of risk. Side effects are usually mild, ranging from soreness at the site of injection to a slight fever and body aches. In one in 100,000 cases, vaccines can trigger severe allergic reactions. Even more rare (the estimate is one in a million) is an increased risk of developing autoimmune conditions that affect the nervous system, such as Guillain-Barre Syndrome.

Two separate studies involving live non-replicative vector virus vaccines—U.K.-based phase 3 AstraZeneca vaccine trial and U.S.-based phase 3 Janssen vaccine trial—were briefly paused after a participant experienced an unexplained medical event known as an “adverse reaction” that may have been linked to their participation in the study. Both have since resumed after researchers and regulators determined that there was no clear connection between the vaccine and the medical events and deemed them safe enough to continue. No adverse events have yet been linked to the mRNA vaccine candidates, except for a handful of allergic reactions requiring EpiPens.

To hedge against uncertainty, the FDA added additional rules to provide increased safety by having specified checkpoints for the accelerated COVID-19 trials. That includes requiring researchers to collect at least two months of follow-up data from a majority of each trial’s participants, even if early data shows promising results, and long-term safety and efficacy out to two years after receipt of the vaccines.

Getting “back to normal”

Next comes the challenge of manufacturing and distributing a vaccine. The full rollout may take months to get enough batches for the general public; in the interim, authorities will prioritize distribution to those most at risk of contracting COVID-19 or those who are at highest risk of suffering the most severe effects of the illness, such as health care workers, older adults, adults with pre-existing conditions and essential workers.

As a new vaccine is distributed, the clinical trials will go on and data will continue to flow in about its long-term effectiveness and any potential safety issues. This will allow researchers and healthcare providers to adapt distribution as necessary.

Realistically, the general public likely won’t have access to a vaccine until sometime this summer. That’s far later than Operation Warp Speed’s initial goal of having 300 million doses available by January, but significantly faster than any other vaccine development effortto date.