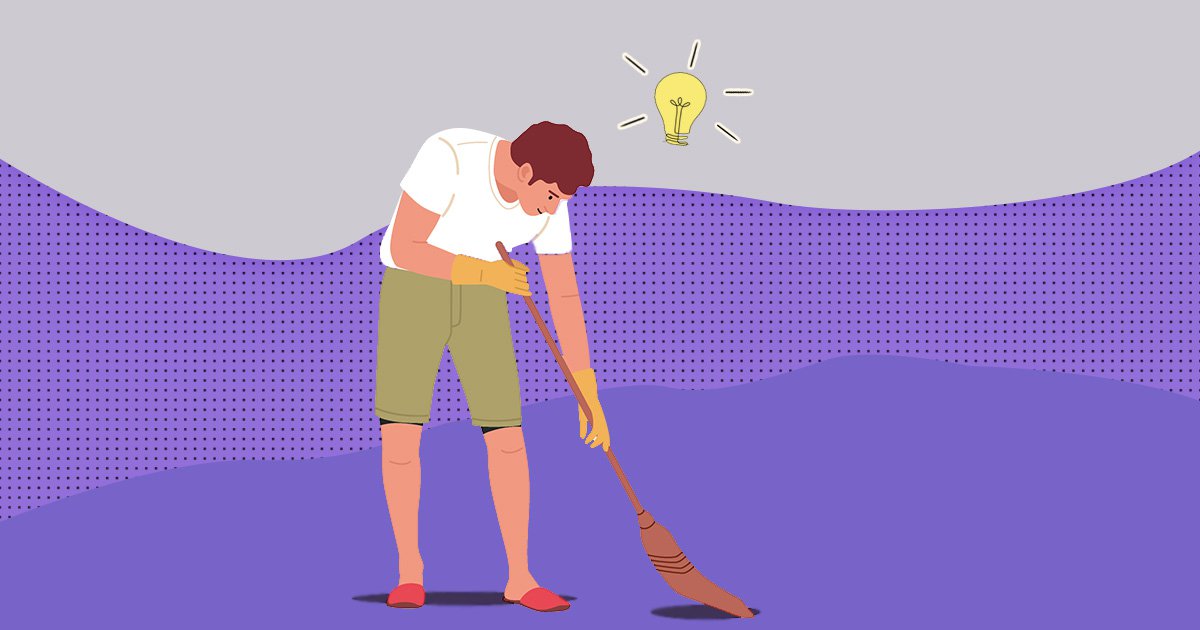 When was the last time you heaved a sigh of boredom? Was it when you were mindlessly tackling that pile of dishes by the sink?

Maybe it was while you were folding piles of laundry, or you were simply home alone with no plans and the TV wasn’t cutting it.

There’s nothing quite like staring into the void with nothing to do, and yet, boredom has its benefits.

Why is it good to be bored?

Simply put, it’s good to be bored because it’s likely to induce a daydreaming state.

World-leading creativity expert, and co-author of The Creative Thinking Handbook, Chris Griffiths explains: ‘There is broad agreement among neuroscientists on the outcomes of boredom-induced daydreaming: heightened creative fluency and problem-solving abilities.’

Daydreaming is the ‘real secret sauce’ which transforms idle time, into momentum for creative thinking and problem solving skills, according to Chris.

The beauty of entering the daydreaming state in this way is that a ‘boring’, repetitive task – like ironing or doing the food shop – occupies just enough of your brain power to prevent you from doing something else entirely, while still leaving your mind free enough to contemplate other things.

So boredom helps us enter the daydreaming state.

Chris said a wealth of neuroscience research shows that sustained effort when focusing on something actually hinders our ability to think clearly.

Not only does this way of working increase the risk of burnout, it prevents our brains from recharging and making crucial connections.

So as daunting as carving out time for boring tasks might be, doing so might just enable you to get more out of the hours you actually spend working.

‘Like sharpening an axe, boredom-induced daydreaming makes your mind sharper and more effective, saving time in your working hours rather than chopping away with a blunted blade,’ he said.

How can we daydream effectively?

Chris said: ‘There’s no specific task which will universally inspire daydreaming. However, tasks which require some kind of low-level concentration or physical engagement can, in my experience, be especially beneficial.

‘Think: repetitive, rhythmic and tedious. That might mean getting out for a walk, or sorting through the laundry.

‘The trick is to pick a task which prevents you from doing something more interesting, and that you particularly dislike. This is what induces boredom, and moves you through to a natural state of mind wandering.

‘That being said, daydreaming doesn’t have to be produced solely through negative or boring tasks – sitting on a bench in a beautiful park or getting out for a run on a sunny day might equally inspire some good mind wandering.’

How can you ensure you’re not disturbed?

There’s nothing more frustrating than feeling like you’re on the cusp of a great idea or solution, then being interrupted, and the thought slips away.

To avoid this, we need to try and banish literal interruptions.

Chris says: ‘If you’re going out for a walk, try getting out on your own or using headphones – even if you’re not listening to anything – to help prevent distraction.

‘If you’re doing the washing up, devote yourself to it fully, closing the door and turning off the radio.

‘Daydreaming gets easier with practice. The more you do it the quicker you’ll be able to enter into the state and dwell there for longer.

‘One of the most important aspects of daydreaming is the free-moving nature of your thoughts, so whenever you feel things starting to stagnate – dwelling on one topic for too long – try to move onto something else.’

How do I optimise my daydreaming?

Make a note of your inspired thought process. ‘If you have a good idea – get it down! That might be in your phone, via an app like Ayoa, over a voice memo, or on a scrap of paper,’ Chris said.

‘This doesn’t mean you can’t get back to more daydreaming right after capturing it, but the last thing you want to do is forget it.’

You must, however, make the distinction between dwelling and daydreaming in order for it to be effective.

Chris said: ‘It’s important to daydream with purpose rather than by accident. In order to daydream effectively you must learn to distinguish between a worrying state and a daydreaming state, as they have very different neurological make ups.

‘Spending time projecting fears about the future isn’t the same as true mind wandering, and it can actually expend crucial energy you might otherwise use working.

‘Worrying tends to stay in one spot, combing through the same details again and again, whereas daydreaming roams around – jumping from one thing to another.’