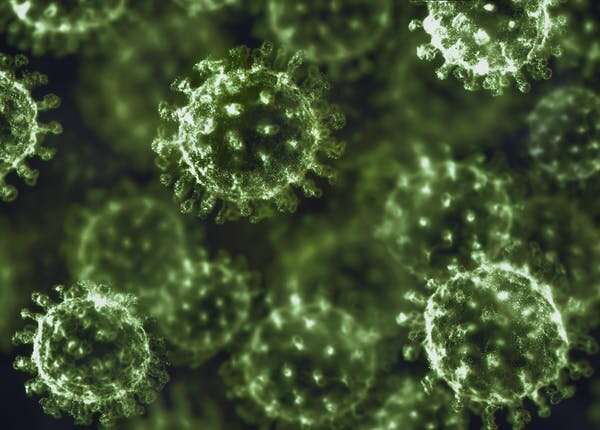 Endemic viruses are those that have constant presence within a geographical area. Such viruses are all around us, though they vary by location. Examples in Europe and North America include the rhinovirus (a cause of the common cold) and influenza virus, while the dengue and chikungunya viruses are endemic in many Asian countries.

Endemic diseases are often milder, but it’s important to note that this isn’t always the case. Flu, for instance, is estimated to cause up to 810,000 hospitalisations and 61,000 deaths annually in the US.

There are currently four endemic coronaviruses that, for most people, just cause a cold. Whether SARS-CoV-2, the virus that causes COVID-19, will join them will be down to two predominant factors that control how a virus behaves in a population: the virus’s biology and the immunity of the host population.

Do viruses evolve to become endemic?

Despite knowing a lot about the biology of endemic viruses around today, it’s very difficult to work out where they actually came from. Did they always cause these persistent milder illnesses or did they evolve from more severe precursors?

Viruses replicate really quickly—after entering a host cell, many produce new virus particles within hours. Due to the speed of this process, mistakes are often made in the copying of their genetic material, resulting in mutations.

Many of these mutations will result in non-viable viruses, unable to infect or replicate. But a small number of these mutations might result in an advantageous change. For example, they may allow the virus to get into host cells quicker or make the jump to a new, different host.

It’s important to remember these mutations are chance events. Viruses cannot actively decide to mutate or make conscious decisions as to where mutations occur.

Once an advantageous mutation arises, viruses with it can quickly out-compete other versions of the virus to become the dominant form in the population. This is what we think we’re currently seeing with the UK variant, which computer modeling suggests has an increased ability to bind to host cells.

We can track mutations in current outbreaks, as scientists across the world are regularly recording and analyzing the genetic material of virus populations using a process called genomic sequencing.

However, looking back to determine how today’s endemic viruses changed to take their current genetic form is almost impossible, as it requires looking at the genomes of viruses that no are no longer in circulation. Some historic viruses have been sequenced in the past, but it is rare to find samples well preserved enough to do this—and besides, this gives us more of a snapshot of the virus at a specific time rather than a detailed look back.

Alternatively, we can look at the genetic material of known viruses now and compare them to each other to try to work backwards to see where certain mutations and strains arose. For instance, the similarity between the endemic coronavirus HCoV-043 and its bovine counterpart, BCoV, implies that the human virus made the jump from cattle. Coupled with historical records, this has led some scientists to propose that the now-endemic HCoV-043 was the cause of a pandemic in the late 1800s.

There is no direct evidence that pathogens mutate to lose virulence over time, and there is no set roadmap of mutations that allow a virus to become endemic. However, we do know that SARS-CoV-2 is mutating. It’s plausible, but not certain, that it could acquire mutations that help it survive in human populations long term.

Our bodies fight back

This is especially true now our immune systems are becoming better trained against SARS-CoV-2 from exposure to the virus and vaccination. Our immune systems have evolved for millennia to effectively ward off infections and are now in an evolutionary arms race with SARS-CoV-2. In particular, our “adaptive” immune system evolves each time we encounter new germs (or have a vaccine) to produce specific and effective antibodies.

Pandemics and sporadic outbreaks occur most often in populations where people have no existing defences to a new disease, often resulting in severe illness and quick spread. But for most endemic diseases, because the germs that cause them regularly circulate, the population as a whole tends to have some existing immunity. This can prevent symptoms from occurring completely or result in diseases being more mild, as the immune system limits the damage caused by a virus.

With COVID-19, it seems that children have milder illness, while more severe disease tends to appear in people over 60. Given this, if lots of people develop immunity early in life (whether via infection or vaccination), over time this could tip the balance towards SARS-CoV-2 being a mild illness if we assume that young people retain some level of immunity throughout life.

As researchers have suggested, using modeling from immunological data to the four existing endemic coronaviruses, it might be possible that we reach a point where everyone is first exposed to the virus in childhood, resulting in COVID-19 infections in later life becoming no worse than the common cold. But it’s important to note that this is still very much hypothetical.

It’s also very important to stress that deliberately infecting people (or actively encouraging infections) would be reckless—we shouldn’t be advocating for young people to catch the virus. We don’t know the long-term effects of COVID-19, or how long immunity to SARS-CoV-2 lasts (either from infection or vaccination). There’s also no guarantee that the disease would become less severe if it did become endemic.