For kids — or really, anyone — the concept of trick-or-treating is pretty amazing. Not only do you get to dress up in a costume, but you are permitted to walk from house to house requesting candy. Something this magical only happens once a year, and for most parents, that’s probably a good thing. Sure you want your children to enjoy Halloween, but what should you do with their candy haul (keeping temperamental tummies and sugar-sensitive baby teeth in mind)?

SheKnows spoke with a few experts to find out how much candy kids should be allowed to eat, and what to do with all the leftover sweets.

So your kids come back with a bag full of sugar — what’s a parent to do? According to Dr. Gina Posner, a board-certified pediatrician at MemorialCare Orange Coast Medical Center in Fountain Valley, California, the key is setting limits. “As a mother, I know it can be extremely difficult saying no to your child when they look so cute dressed up in their costume and excited about their treasure trove of Halloween candy after a fun night of trick or treating, but I think parents should limit their child to three to four small pieces of candy or just one larger item.”

Another strategy involves discussing the candy limitations before the kids even hit the streets. “I encourage parents to set a predetermined amount of candy that they feel is an appropriate amount prior to going out for trick or treating and discuss the amount with their children beforehand,” Dr. Tyree Winters, an osteopathic physician and board-certified pediatrician tells SheKnows. “This will set a realistic expectation for how much candy the children will be allowed after returning home, and hopefully avoid conflict later that evening.”

Even if you normally have a no-sugar policy the rest of the year, Dr. Robert Hamilton, a pediatrician at Providence Saint John’s Health Center in Santa Monica, California says that it’s reasonable to bend the rules — but not break them completely. “There is no need to throw out our own experiences, the knowledge of what our children can handle or our years of acquired wisdom,” he tells SheKnows. “Every parent knows that an unlimited candy spree comes with consequences; like a belly ache and a “sugar high” that usually doesn’t end well.” 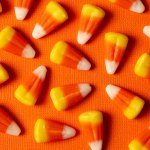 Everything Your Dentist Wants You to Know About Halloween Candy

And of course, you want to be especially sure that your kids brush their teeth before going to bed on Halloween night, Hamilton advises.

What to do with all the candy post-Halloween

Starting on November 1, your child will have access to a significant candy reserve, and it’s up to you to decide what happens to it. One option, Hamilton says, is to parse the sweets out over a period of a few weeks, allowing a nightly candy treat in lieu of dessert.

Posner recommends sneakily throwing it out, or finding a local dentist who offers money for your candy. Also, there are companies that will send it to our servicemen and women overseas, she adds. Hamilton suggests donating excess candy to a homeless shelter or other venue that could use it.

And chances are, your kids don’t love all the candy they got trick-or-treating. Maybe they’re really into chocolate but not so keen on Smarties. Rachel Evans, an eating disorder specialist and health psychologist suggests asking your kids what kinds of candy they don’t like, and then getting rid of what they don’t enjoy. “There’s no point keeping the ones that no one likes and eating them just because,” she tells SheKnows.

The bottom line is that like everything else, candy can be enjoyed in moderation on and after Halloween. It’s entirely possible for your kids to go trick-or-treating and come back with a sizable candy stash and not have them go buck wild, gorging themselves on sugar. As a parent, it’s up to you to regulate their sugar intake, and the last night in October is no exception.

A version of this story was published October 2019.

Before you go, check out our favorite inspiring quotes about cultivating healthy food and body attitudes: