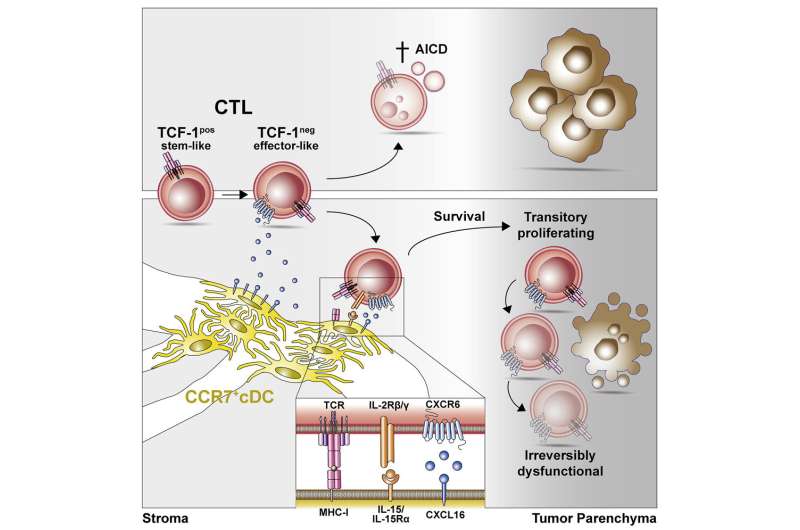 The body’s immune system can recognize and attack cancer cells, but when those are able to overcome this assault, malignant tumors develop in patients. New research led by investigators at Massachusetts General Hospital (MGH) uncovers some of the key factors that are needed for survival of immune cells in the battle against cancer. The findings, published in Cell, point to potential therapeutic targets to tip the scales so that the immune system can effectively defeat aggressive cancers.

Cytotoxic T lymphocytes (CTL) are the cells that recognize and destroy cancer cells, and they’re first activated in tumor-draining lymph nodes. From there, they enter the bloodstream to reach tumors and battle malignant cells. Tumors are very hostile environments for CTLs, however. When researchers used imaging techniques to examine what goes on there, they found that to survive in tumors, CTLs must spend time in regions adjacent to blood vessels in the tissue surrounding cancer cells.

“Within these niches, they are able to interact with a highly activated population of so-called dendritic cells that provide survival signals that CTLs depend on,” explains senior author Thorsten Mempel, MD, Ph.D., associate director of the Center for Immunology and Inflammatory Diseases at MGH and a professor of medicine at Harvard Medical School. “Such signals, including the cytokine IL-15, enable CTLs to survive long enough to effectively eliminate cancer cells and, under ideal conditions, reject the tumors entirely.”

Mempel and his colleagues also wondered how CTLs find their way into these survival niches. They suspected a major role for chemokines, which are chemotactic guidance factors that direct the migration of immune cells and help them find each other within tissues. “We discovered that one chemokine called CXCL16 is highly expressed by those activated dendritic cells that occupy the blood vessel–associated niches, and that the receptor for this chemokine, called CXCR6, helps CTLs to accumulate in the niches and is thereby critical for their survival in tumors,” says lead author Mauro Di Pilato, Ph.D., an assistant professor in the Department of Immunology at The University of Texas MD Anderson Cancer Center.