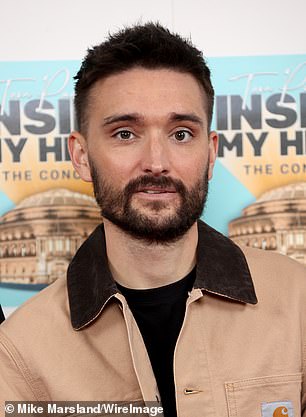 The Wanted singer Tom Parker has died aged 33 after an 18-month battle with a deadly and aggressive form of brain cancer.

The pop star and father-of-two was told he had stage four glioblastoma in September 2020 after suffering an severe seizure on a family holiday.

He had been on an NHS waiting list for an MRI scan at the time after bouts of unexplained fits.

Due to Covid restrictions in place at the time, his wife and daughter were not allowed to be with him when he was given the terminal diagnosis.

Glioblastoma is the most common form of brain tumour in the UK, with more than 2,000 cases diagnosed every year.

But it has a notoriously poor prognosis, with patients usually only living for 12 to 18 months after a diagnosis.

This is partly to do with the speed the cancer spreads, but it is also due to a lack of treatments able to successfully combat it.

In 2018, former Labour MP Tessa Jowell died after a battle with the disease and former US Senator John McCain succumbed to the cancer in 2017.

It can kill by shutting down the brain entirely or pressing against the brainstem, which controls breathing and pulse.

Parker began suffering seizures in July 2020 and was put on a waiting list for an MRI scan on the NHS.

Six weeks later he had his most serious seizure yet during a family trip to Norwich and was rushed to hospital.

He spent three days in hospital and was not allowed to see his wife Kelsey or young daughter Aurelia due to Covid measures in place at the time.

The boy band member was alone when he received the news that his brain tumour was inoperable and terminal.

Parker and his wife revealed his diagnosis to his fans on October 12, 2020, saying they were ‘absolutely devastated’ but vowing to ‘fight this all the way’.

By that time, he had already begun chemotherapy and radiotherapy treatment to shrink the cancer and slow its spread.

Complete removal by surgery was impossible because the tumours become intertwined with brain tissue.

Glioblastoma forms from cells called astrocytes that support nerve cells. It has usually spread deep into the brain by the time it is diagnosed.

Like many brain tumours, scientists do not know what causes the cancer and in most cases patients have no family history of the disease.

Parker was given private treatment on top of his NHS care, which may have included steroids to reduce swelling around the tumour and drugs to ease his symptoms.

His condition improved during 2021 and he continued to share updates on his treatment on social media.

In November 2021, the star revealed in an Instagram post that his brain tumour had been brought ‘under control’.

Although a scan revealed tumour was ‘stable’ and not progressions, it did not mean he was cancer-free.

WHAT IS A GLIOBLASTOMA AND JUST HOW DEADLY IS IT? THE AGGRESSIVE BRAIN TUMOR SUFFERED BY JOHN MCCAIN

Senator John McCain was diagnosed with a glioblastoma in July 2017

Glioblastoma is considered the most aggressive tumor that can form in the brain. Senator John McCain was diagnosed with one in July 2017.

Patients have a 10 percent chance of surviving five years after their diagnosis, according to figures. The average lifespan is between 14 and 16 months.

Three adults per every 100,000 will be struck down with a glioblastoma, says The American Association of Neurological Surgeons (AANS).

It is most commonly found in men aged 50 to 60, and there is no link between developing glioblastoma and having a previous history with other cancers.

WHAT IS THE TUMOR MADE OF?

The tumor is made up of a mass of cells growing quickly in the brain, and in most cases patients have no family history of the disease.

It won’t spread to other organs, however, once it is diagnosed, it is nearly impossible to target, surgeons claim.

Unlike other types of brain cancer which are more specifically located, glioblastoma can occur in any part of the brain.

WHAT TREATMENT IS AVAILABLE?

Because the tumor likely already spread deep into the brain by the time it is diagnosed, the cancerous tissue is incredibly difficult to remove.

Surgeon will only ever remove the tumor, or part of the tumor, if it won’t do any damage to the surrounding brain tissue.

Dr Babcar Cisse, a neurosurgeon at the Weill Cornell Brain and Spine Center, told Daily Mail Online in July 2017: ‘By the time a glioblastoma is diagnosed, microfibers can spread to the rest of the brain which an MRI would not spot.

‘So even if the main tumor is removed and the patient receives radiation and chemotherapy, it will come back.’

Brain tumors are graded from between one to four, depending on how fast they grow and how aggressive they are.

Malignant tumors are either given a high-grade three or four, while benign ones are given a lower grade one or two.

Glioblastoma is often referred to as a grade four astrocytoma – another form of brain tumor, says the AANS.

Patients typically complain of symptoms such as confused vision, trouble with memory, dizziness and headaches.

The symptoms are somewhat nonspecific, and vary from person to person, and may not persist.

The disease is therefore impossible to diagnose based on symptoms alone.