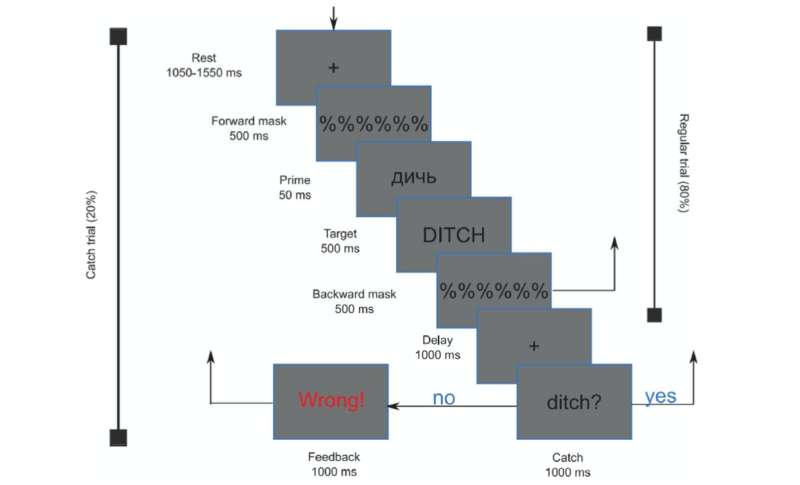 An international team of researchers led by scientists from the HSE University have examined the interplay of languages in the brains of bilinguals. Using EEG data of Russian-English bilinguals, the authors were the first to demonstrate nearly instant and automatic detection of semantic similarity between words belonging to their two languages, suggesting the existence of an integrated bilingual lexicon in which words are activated in parallel in both languages. The study findings are published in Cortex.

Bilingualism is a widespread phenomenon of growing importance in today’s world of globalization and migration. In the broader sense, bilinguals are people who are able to communicate in two languages. Bilinguals can be “balanced” or “non-balanced” depending on the level of language proficiency, and “early” or “late” depending on the age of second language acquisition.

An increasing number of studies focus on non-balanced late bilingualism, since most bilinguals belong to this group. The questions of whether bilinguals access the lexicon of each language separately, whether their brains have formed an integrated bilingual lexicon, and how fast they are able to process linguistic information in their second language are widely discussed in research.

Previous research reveals that monolinguals have fast and automatic lexico-semantic access to their language. EEG captures the brain’s response to a linguistic stimulus after 50 ms, meaning that a person takes just 0.05 seconds to recall and say the right word. An international team of researchers with the participation of scientists from the HSE Institute for Cognitive Neuroscience have examined whether “late” bilinguals are able to process lexico-semantic information as fast and whether it involves parallel activation of the other language.

The authors asked 17 HSE University students, native speakers of Russian, to complete a task that involved semantic priming, ie, the mind’s tendency to recognize a word faster if it is preceded by a similar one. In bilingual experiments, primes used are usually first- or second-language words which are similar in meaning, sound or spelling to the target word. In most cases, primes are masked so that subjects are not consciously aware of them.

In this experiment, Russian words were presented as primes of English targets in conditions of semantic similarity or dissimilarity between the two languages. Stimuli were presented on a computer screen as a sequence: a cross in the middle of the screen to focus on, a series of % symbols as the forward mask, a prime presented for 50 ms followed by a target word, and the backward mask. The subjects were finally presented with a catch word and asked whether it was the same as the preceding target word. Since masks were used and the prime was shown for a very brief period, the prime’s effect on the perception of the target word was subliminal.

The authors recorded the subjects’ EEG throughout the experimental session. An amplitude difference was registered at 40–60 ms, which is the earliest crosslinguistic effect reported so far.

“Our findings confirm the existence of an integrated brain network for the bilingual lexicon. In this experiment, Russian primes, similar semantically to the English targets, made it easier for subjects to understand foreign words and shortened their reaction times. Our results suggest that second-language words are activated automatically in bilingual brains, and that cross-language interplay involves left temporo-parietal neural regions,” says study co-author Federico Gallo, Junior Research Fellow of the HSE Institute for Cognitive Neuroscience.