Hospitals treat 1,000 dementia patients a day because basic social care is so poor they are forced to turn to casualty wards for help

Poor social care has driven up emergency admissions of dementia sufferers to nearly 1,000 a day.

The number of dementia patients admitted to hospital in an emergency has soared by a third in four years, official NHS figures reveal.

Experts said many patients were ending up in hospital ‘in crisis’ as a result of basic failings in social care.

The figures include patients admitted on to wards via A&E or after being referred directly by their GP as an emergency. Many would have suffered falls or developed chest or urinary infections, often triggered by dehydration or malnutrition. 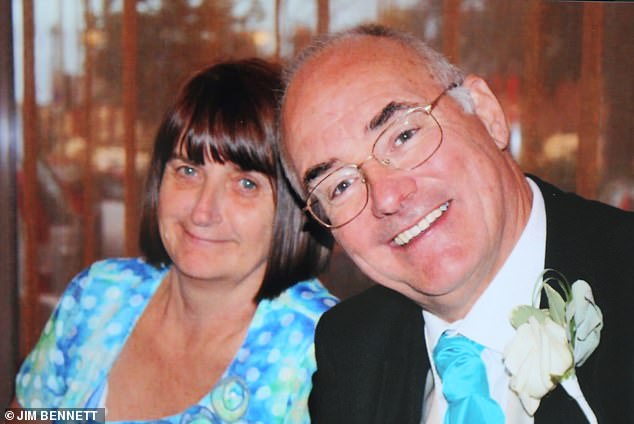 Devoted partner: Sue with husband Alan Spice, who has had to move care homes twice because staff were unable to cope with his frequent trips to A&E. The 71-year-old had two or three falls a day as a result of his advanced dementia

Once in hospital they tend to deteriorate quickly, and up to half who are admitted from their own home are too frail to ever return.

The Daily Mail launched a major campaign last month calling on the new prime minister to fix the crisis in social care for dementia patients. Countless families have to pay huge sums for care which is often appalling in quality.

result of basic failings, such as carers leaving a glass of water beside their chair, but not prompting them to drink.

Sally Copley, director of policy and campaigns at the charity, said: ‘It is sadly not surprising to hear that more and more people with dementia are being taken to hospital in crisis.

‘We know thousands of people with dementia every year are hospitalised by things that could have been prevented with better or more widely available care in the community, and people are often then trapped in hospital because of the lack of social care when they’re well enough to leave.

‘The social care crisis is leaving the NHS facing bigger financial strain, beds taken up in hospitals and people unable to leave their care because there is such little support to return home.

My husband, 71, has two or three falls a day

Alan Spice has had to move care homes twice because staff were unable to cope with his frequent trips to A&E.

The 71-year-old had two or three falls a day as a result of his advanced dementia, leading to regular hospital visits. He was transferred to a specialist care home in St Leonard’s, East Sussex, in September 2017, but even they said his needs were ‘too complex’ and asked him to leave.

Mr Spice, a former bank manager, has finally settled at his third home, Abbey Lodge in Coulsdon, south London. But his wife, Sue, claims he has had to pay an extra £2,000 a month to avoid being booted out, because the home said it needed more cash to meet his needs.

Mrs Spice, 72, said the situation was a ‘joke’. She added: ‘It’s upsetting. I don’t know how much help I was expecting to get, but it was certainly more than I have actually received.’

To make matters worse, Mr Spice had his continuing healthcare funding withdrawn in 2017, despite his wife insisting his condition had not improved.

Mrs Spice believes the care worker who carried out her husband’s assessment played down his condition so that funding would be withdrawn.

She said: ‘He can’t walk, can’t talk, can’t breathe and is mute, yet he is not counted as being ill or having medical needs. I visit him every day. It varies. It’s so difficult when he can’t talk, because if he is in pain he can’t tell you. It’s an awful disease.’

‘The human cost on people with dementia cannot be pushed aside any longer.

‘Boris Johnson must address our calls for an immediate investment in an NHS Dementia Fund to give people the vital financial support they need whilst also addressing long-term reform.’ Caroline Abrahams, charity director at Age UK, said: ‘The sharp rise in these figures reflects a social care system under siege and shows that community health services are struggling too. Older people with dementia and other serious health problems need committed care workers who know them well and who can spot when things are starting to go wrong, and responsive GPs and district nurses with the time and space to get involved quickly and nip emerging health issues in the bud.

‘Without rapid intervention in the community these older people are likely to deteriorate fast, to the extent they have to be whisked into hospital on an emergency basis. This is distressing for them and threatens to undermine their fragile health still further, and a big, avoidable cost to the public purse as well.’

Research published last month found that 41 per cent of emergency admissions from care homes were for avoidable conditions such as chest infections, pressure sores and urinary tract infections that could have been easily treated or were a result of poor care or neglect.

The data included all care home residents, but experts said those with dementia – who make up more than two thirds of people in care homes – were bearing the brunt of the crisis.

The report by the Improvement Analytics Unit – a joint initiative between NHS England and the Health Foundation think-tank – said that if care was better, there would be fewer trips to hospital. Adam Steventon, of the Health Foundation, said: ‘Around 70 per cent of care home residents have dementia and can find the hospital environment even more stressful and disorienting as a result.

‘Our evaluations show that by increasing NHS support and improving partnership working with care homes, it is possible to reduce emergency admissions to hospital and A&E visits among care home residents. It also highlights that better preventative care may help to reduce unnecessary emergency hospital admissions, for example some fractures may be avoided with appropriate risk assessment.’

Previous research by the Alzheimer’s Society has found that dementia patients typically stay in hospital twice as long as patients without the illness. The average length of stay was 12 days compared to 5.5 days for all other patients over 65. The research also found that just over half of dementia patients admitted to hospital from their own home did not go back.

The Department of Health said the rise in admissions was partly due to the ageing population, with more patients now living with dementia. Improved ‘coding’ in recent years – recording whether patients have dementia when they come into hospital – may also be a factor.

A department spokesman said: ‘Our ageing population means more people are living with dementia, and they should only be admitted to hospital when absolutely necessary. We are determined to improve community and social care services to ensure everyone gets the best quality care and can live independently at home for longer.

‘We have given local authorities access to nearly £4 billion more dedicated funding for adult social care this year, and a further £410 million is available for adults and children’s services. The Prime Minister has been clear he is committed to fixing the social care system and will outline proposals as soon as possible.’

You can help send a message: Sign our petition change.org/dementiacare