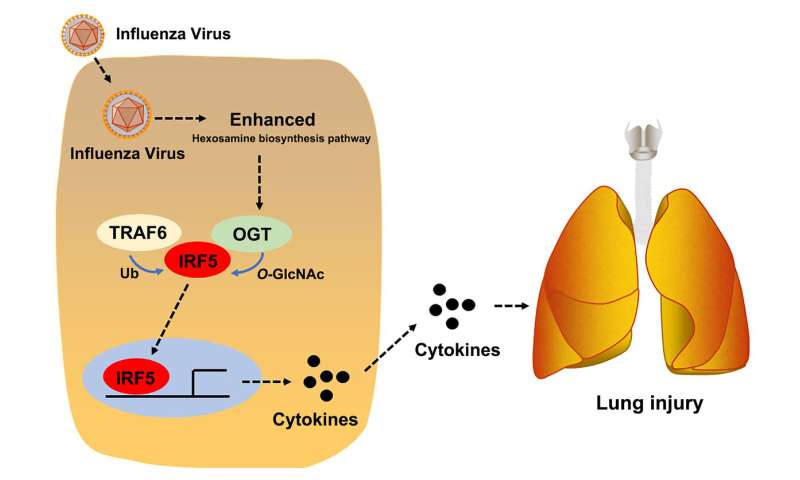 A team of researchers affiliated with multiple institutions in China and one in Germany has found evidence that suggests high glucose levels may explain why some flu patients have worse symptoms than others. In their paper published in the journal Science Advances, the group describes their work with mouse models and flu patients and what they learned from it.

As the global pandemic has unfolded, medical workers and researchers have noted that patients who have diabetes tend to have worse outcomes than people with no underlying health issues—the same has been found to be true for patients with influenza infections. In this new effort, the researchers sought to better understand why such patients are more susceptible to an inflammatory response that can lead to pneumonia and death.

Prior research has shown that when the influenza virus (or the SARS-CoV-2 virus) makes its way into the human body, the immune system responds by sending immune cells to the site to combat the threat. Cytokines are produced as part of the response. Their job is to handle cell-to-cell communications. In some people, though, the body produces too many cytokines, resulting in a cytokine storm, which can lead to very serious problems such as pneumonia or organ failure. Unfortunately, medical scientists have not been able to figure out why they occur in some patients but not others. In this new effort, the researchers suspected that heightened levels of glucose in the bloodstream might play a role. The researchers injected flu-infected test mice with glucosamine to see if it resulted in an increased chance of cytokine storms and report that it did.